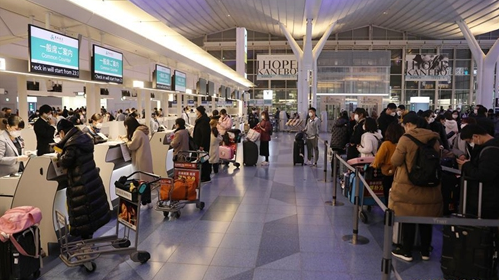 Passengers line up to check-in at the airport counter of Spring Airlines at Tokyo International Airport in Tokyo, Japan, January 31. (Photo: Xinhua)

More Chinese airlines are in the process of resuming international flights, as China has pressed the restart button on business operations, but trade and travel in and out of China remain weak as dozens of airlines around the world have temporarily halted Chinese routes.

Air China said it will resume services from Chengdu in Sichuan Province to Frankfurt this week. China Eastern said it plans to resume five international flights including Tuesday's flight from Kunming to Yangon, Myanmar. China Southern Airlines is expected to restart the flight from Guangzhou to Nairobi, Kenya on Tuesday after days of suspension.

A note from China Eastern sent to the Global Times on Tuesday said that half of its flights could resume in March.

Beyond the three carrier giants, more local airlines are restarting overseas flights, as are foreign carriers.

Zhang Wu'an, spokesperson of low-budget Spring Airlines, told the Global Times Tuesday that 70 percent of its overseas flights have been canceled and a few are in the process of recovery, and it is expected that service may be restored to half capacity in mid-March.

Sichuan Airlines will resume flights from Chengdu to Tokyo and Cairo on Tuesday and Friday, and the city, home of some high-end manufacturing companies such as Intel, Apple and Dell, will resume 26 overseas routes at the end of this month.

Egypt Air said last week that it will restart round-trip flights between Cairo and Guangzhou from Thursday and the carrier is considering an increase in the number of flights to Chinese cities, based on demand.

However, the restarted flights are still very few compared with those suspended amid the COVID-19 epidemic.

Data from VariFlight, one of China's top air-data services firms, showed that the cancellation rate of flights from the Chinese mainland to overseas cities reached 84.78 percent Monday.

As of February 14, dozens of airlines around the world had temporarily canceled Chinese routes. For example, all three major US airlines have suspended flights to China, and Lufthansa and Austrian Airlines have paused flights to and from China.

The sharp downturn in demand as a result of the COVID-19 epidemic will have a financial impact on airlines - severe for those particularly exposed to the China market, the International Air Transport Association (IATA) said.

IATA has predicted that China's domestic market alone could see losses of $12.8 billion, affected by COVID-19, and the Asia-Pacific region could see $27.8 billion revenue loss in 2020 for carriers, the bulk of which would be borne by carriers registered in China.

As growth for the region's airlines was forecast at 4.8 percent, IATA said the net impact will be an 8.2 percent full-year contraction compared with 2019 demand levels, with a potential 13 percent full-year passenger demand loss for carriers in the Asia-Pacific region.

In the same scenario, carriers outside the Asia-Pacific region were forecast to bear a revenue loss of $1.5 billion, assuming the loss of demand is limited to markets linked to China.

"These are challenging times for the global air transport industry," Alexandre de Juniac, IATA's director general and CEO said in a press release sent to the Global Times.

China Eastern Airlines' January data showed that passenger throughput on domestic and regional routes decreased by 4.91 percent and 29.89 percent year-on-year respectively. The load factor was at 75.38 percent, a decrease of 5.41 percentage points year-on-year.

The Civil Aviation Administration of China (CAAC) said the nation's air transport market in January contracted due to the impact of the epidemic.

However, as more neighboring countries are experiencing more cases of COVID-19, airlines are taking a cautious attitude on resuming flights.

Zhang Wu'an from Spring Airlines said that the company is reconsidering the possibilities of restarting two flights from Shanghai to South Korea later this week due to the epidemic outbreak in neighboring countries.

"We have concerns about our business in overseas countries, especially in Japan and South Korea," he said.

Experts and organizations warn that there is no reason to make unnecessary interventions in international travel and trade.

Countries that have implemented restrictive measures on trade and travel to China should re-evaluate and cancel relevant measures, otherwise, they will affect the world's overall response to the epidemic, Canadian epidemiologist Bruce Aylward, who heads the WHO mission team to China, said on Monday at a technical briefing upon the completion of the WHO-China Joint Mission on COVID-19.

The CAAC earlier this month also urged certain countries and regions to remove administrative restrictions on international flights and travelers from China amid the outbreak.