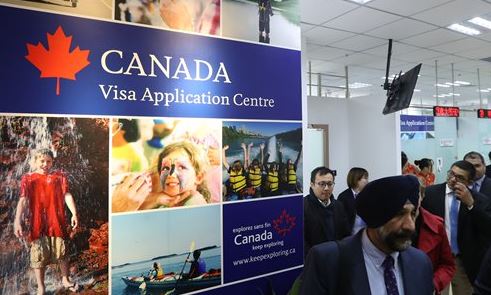 The number of Chinese citizens applying for tourist visas to Canada sank in the months after bilateral relations soured over Canada's arrest of an executive of Huawei, according to media reports and tourism insiders on Tuesday.The figure of Chinese tourists applying for 10-year Canadian visas dropped significantly in the first two months of the year, with the number in January down by almost half, Canadian newspaper The Globe and Mail reported on Monday. Though the number rebounded in April, it was still lower than the year-earlier level, the report said. Sun Chenghao, an assistant research fellow at the China Institutes of Contemporary International Relations, said that political tensions were to blame for the drop. Canada arrested Meng Wanzhou, chief financial officer of the Chinese telecoms firm Huawei, in December at the Vancouver International Airport at the behest of the US."Relations between China and the US remain lukewarm as they are in a trade war," Sun told the Global Times on Tuesday. "Canada has a super close tie to the US in Meng's case, which may result in Canada suffering from this."On Monday, Meng's lawyers called on Ottawa to drop the extradition proceedings of her for the "national interests" of Canada. China is not in any trade war with Canada.In mid-January, the Chinese Foreign Ministry issued a "cautiously visit" notice on Canada - the second-level safety advisory - warning Chinese citizens to fully assess the risks they might face when visiting Canada. Apart from Meng's case, sour relations between China and the US might also discourage Chinese travelers, who tend to visit both countries in one trip, from visiting Canada, according to Xu Xiaolei, an official with the marketing department of China CYTS Tours Holding."Generally, Chinese tourists going to Canada are those who are touring North America as a whole," said Xu. "If the things with the US do not go well, Canada will not go well either." Tourism insiders also believe that getting visas for northern European countries is easier than getting one to Canada, which further diminishes Canada's attractions for Chinese tourists."Canada's winter is too cold for most Chinese visitors, except those who specifically want to watch the northern lights or go skiing," said an official of a Chinese tourism agency on condition of anonymity. "Similar attractions can easily be found in northern Europe like Scandinavian countries."Sharp declines in Chinese visitor arrivals in Canada could deal a major blow to the country's tourism industry, as revenue from one of the largest spenders could fall sharply, experts said.In 2017, around 682,000 Chinese tourists visited Canada and each spent about $2,400 per trip, according to a separate report from the Globe and Mail in December 2018. Canadian tour operators catering to Chinese government visitors have also said the arrest of Meng and increased tensions between the two countries are hurting their businesses, the Globe and Mail reported in April.