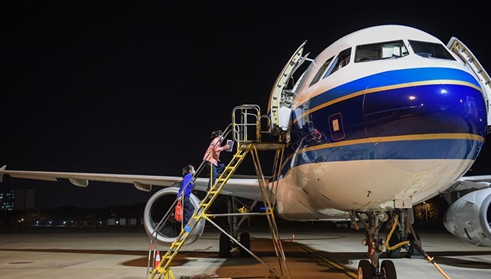 Staff members step into an airplane to conduct disinfection operation after all the passengers left at the Haikou Meilan International Airport in Haikou, south China's Hainan Province, Jan. 31, 2020. China Southern Airlines has strengthened its efforts on the prevention and control of the novel coronavirus, demanding all the facilities inside the cabin to be disinfected after flight. (Photo: Xinhua)

China Southern will fly a total of 20 overseas routes per week, including 16 routes from Guangzhou, two flying from Shenyang, one from Urumqi, and one from Shanghai, according to a note posted on its website on Monday.

Among the 20 routes, most go to Southeast Asia with seven routes connecting to Cambodia, Malaysia and Thailand. It still has three flights to Europe including Amsterdam in the Netherlands, Paris in France and London in the UK. In North America, it has Guangzhou to Los Angeles in the US and Guangzhou to Vancouver in Canada.

The arrangement is the same with the one in May, with the addition of a route from Shanghai to Taipei in June.

China's government launched its "Five One" policy at the end of March in a bid to curb the COVID-19 crisis, allowing one airline to serve one country, from one Chinese city to one foreign city, with no more than one flight a week.

An insider from the air regulator, the Civil Aviation Administration of China, told the Global Times on Monday that it hasn't received any confirmation on the resumption of international flights.

However, there are overseas airlines that are anxious to see more international routes allowed into China.

Delta Air Lines said it also hopes to resume daily passenger flights from Seattle and Detroit to Shanghai in June, which is still pending approval from the Chinese government.

Delta's daily flights in June increased by about 100 compared to May, including flights from the Atlanta Airlines Hub and New York 's JFK International Airport to Florida.

South Korea's Asiana Airlines reportedly plans to resume 12 routes to China. Fortune reported earlier this month that United Airlines is planning a strong return to China in June and will "pencil in" a relaunch of passenger services with four flights to three cities - Beijing, Chengdu, and Shanghai.