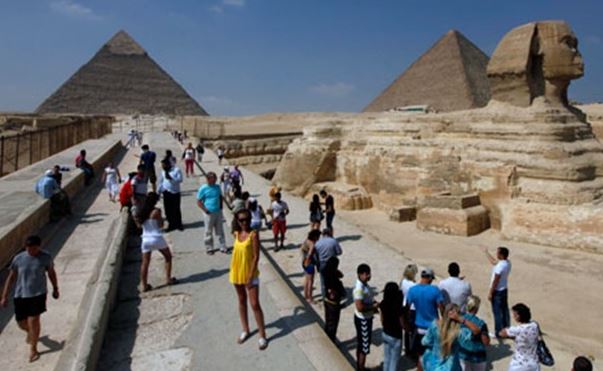 CAIRO, Oct. 25 (Xinhua) -- Chinese Cultural Counselor to Egypt Shi Yuewen expected an increase in the number of Chinese tourists to Egypt given the current stable conditions in the country.

"According to Chinese statistics, more than half a million Chinese tourists visited Egypt in 2018 and we expect more this year," Shi told Xinhua in a recent interview.

It is still early to give an accurate number of tourists visiting Egypt in 2019, as October, November and December, with good weather, are high seasons for Chinese tourists, he said.

Talking about the most popular destinations visited by Chinese tourists, Shi mentioned the Pyramids in Giza, the cities of Luxor, Aswan and Alexandria, as well as the resort cities of Hurghada and Sharm el-Sheikh.

He called on the Egyptian Tourism Ministry to launch more advertisement campaigns inside the Chinese markets to attract more tourists.

Egypt, one of the most ancient civilizations, has been working hard to preserve its archaeological heritage.

In a bid to revive its ailing tourism which has been suffering an acute recession over the past few years because of political turmoil and security issues, Egypt has been organizing conferences and campaigns abroad to promote this vital sector.

The Chinese envoy also invited the Egyptian Tourism Ministry and the country's tourism companies to take part in the international exhibitions in China to advertise its tourist destinations.

There are many similar features between the Egyptian and the Chinese ancient civilizations which make the Chinese tourists feel familiar in Egypt, Shi explained.

He pointed to the fourth edition of the Afro-Chinese Arts and Folklore Festival, which will be held in the upper Egyptian city of Aswan from Oct. 27 to 31, saying it will be a chance to show the old aspects of the ancient city to the world.

"The Chinese Ministry of Culture and Tourism has chosen the best popular bands to take part in the festival, a move which indicates that the Chinese government pays great attention to the event," Shi said.

According to the Chinese official, the Afro-Chinese Arts Festival signals the deep friendship between the Chinese people and the African people.

"The cultural events are important tool for enhancing ties between China, Egypt and African countries in general," Shi said.

"We live in one village, and we should live as one family," he added.