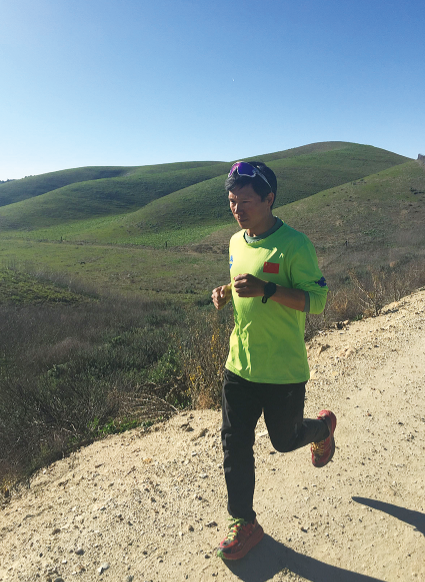 Los Angeles (People's Daily) - When it comes to extreme endurance challenges, names like Lizzy Hawker, current world record holder for running from Everest Base Camp to Kathmandu, and Dean Karnazes, an American who ran continuously for 350 miles, are popular examples of what humans can achieve. In comparison, Chinese names are rarely mentioned when such endurance challenges are discussed, but that will soon change as a Chinese runner is on his way to complete the unthinkable.

Bai Bin, a 49-year-old, has spent the past year running from the South Pole to the North Pole. Once he finishes, he will have jogged for 400 days, traveling 24,000 kilometers through 60 cities in 13 countries, across both American continents. Traveling with him is an amateur logistics team made up of dedicated and intrepid volunteers.

“I am not doing this for fame or fortune. I would like to push my mind and body to the farthest possible limits while simultaneously proving that not only can the Chinese handle extreme endurance challenges, we can do them even better,” Bai told People’s Daily.

Against all odds, he and his team started from the Great Wall Station of China in Antarctica on March 1, 2018.

Since he started, every day Bai has jogged over eight hours a day, covering an average distance of 60 kilometers. To maintain his strength, nutrition and water are replenished daily.

“Bai Bin needs to stop for replenishment dozens of times while running. In addition to water and food, we also provide him with energy drinks and nuts. To reduce budget expenses, we cook and eat in our vehicles,” said Li Zhenyu, head of the logistics team.

Logistics have played a key factor during this expedition, but food and supplies issues have been dwarfed by safety risks lurking in the unknown.

In August, Bai and his team entered Darien Gap, a remote, roadless swath of jungle on the border of Panama and Colombia. Known as a drug smuggling corridor between the two countries, it is a forbidden area for many outsiders. However, it was the best route the could take along the west coast of the South American continent.

“Darien Gap is the home to several armed militias. Days before we were about to go into the jungle, we were told that a few people had been killed recently in that area. For safety reasons, we took a detour by the sea,” Bai said.

His biggest crisis, one that nearly cost his life, happened in Mexico where he was kidnapped by a group of gunmen at a border city in November.

“We were followed by a group of gunmen. I was flanked and forced into a car at gunpoint. They took me to a room where I was surrounded by almost 40 armed personnel,” Bai said.

“I showed them some photos and videos of me running and tried hard to convince them that I wouldn’t be a good ransom,” he explained.

His Mexican abductors dropped him off at a roadside and let him go. They even gave him two bottles of water and told him to keep running.

“There was a time I thought that my journey could end up somewhere in the city,” Bai said with a calm tone when he recounted those experiences.

Bai and his team ran to Los Angeles in early January. He is expected to reach Fairbanks, Alaska in roughly eight weeks.

“I will always run, and not only to test my own limits, but also to show the faith and courage of Chinese,” Bai said.