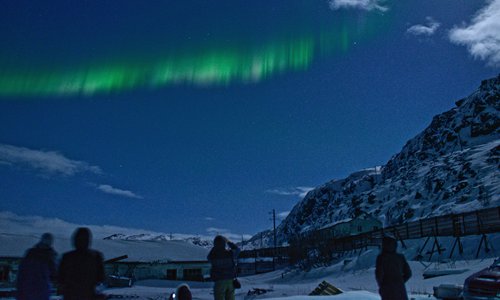 Tourists watch the polar lights at Teriberka, about 100 kilometers from the city of Murmansk. Photo: VCG

Chinese tourists made up the largest group going on Arctic tours in Russia in the last few years, Sputnik News reported on January 10.The Arctic region in Russia has been developing facilities to serve growing numbers of Chinese tourists, with a cabin hotel targeting Chinese guests in Murmansk opening on Thursday.In 2018, Russia will remain a popular destination for Chinese tourists, experts said.Polar lights"Taking pictures of the aurora in Murmansk is amazing," said one Beijing tourist named Tea-tia, who is also an aerospace photographer.Tea-tia returned to Beijing from Russia on Sunday after going on a tour to watch the aurora in Murmansk, Russia's main port within the Arctic Circle, in the past 10 days.Traveling in Russia's Arctic regions became very popular two years ago in the Chinese mainland, said Zheng Qiaotian, Chief Representative of ATC Shenzhen Representative Office, a company that works with hotels, malls and airlines in Russia.Tours that involve watching the aurora in Russia began later than in countries such as Finland and Canada, and the facilities there are not as developed, Zheng told the Global Times on Monday."So we built a base-type hotel to allow guests to enjoy the aurora in these cabins…even though it is -60C outside." The hotel opened on Thursday, with expansions planned within the year. The hotel will also have Chinese services and facilities.Apart from watching the aurora, tourists can also visit Sami village and experience traveling in sleds dragged by huskies.One "aurora village," 50 kilometers from Murmansk, was booked full before the Winter, with most guests coming from Asia, according to Sputnik."Not so many Chinese visitors go to Russia to see the aurora, but Russia is cheaper," Tea-tia, who paid 14,000 yuan ($2,175) for the trip, said. Breaking the iceChinese tourists are the most active visitors to the Arctic region in Russia, and their numbers have increased ten-fold in the past decade, Sputnik reported on January 4 quoting the Russia Federation of Tourism.According to "World without Borders," an association that promotes Russian tourism, Chinese people have become more enthusiastic about traveling to Russia and make up the largest number of tourists at the Russian Arctic National Park, Sputnik reported.A total of 1,142 tourists from 36 countries visited the park, with 206 from China, accounting for 18 percent of the total in 2017, the association said. But it's the cruises through the islands in the Arctic Ocean that are proving most popular with Chinese tourists. In the five cruises offered in summer 2017 by the 50 Let Pobedy, or 50 Years of Victory, the largest Arktika-class nuclear-powered icebreaker in Russia, more than 80 percent of passengers were from China, Sputnik said.According to an order page from the Yangchengzhilu international travel agency in Guangdong Province, a 15-day photography tour in the Arctic region with the 50 Let Pobedy costs between 190,000 yuan and 319,000 yuan.A spokesperson for the Russian Arctic National Park said that the icebreaker has information and menus written in Chinese for the passengers. The Park has also published a Chinese guidebook on the research station on Franz Josef Land.The journey, starting from Murmansk, brings the powerful icebreaker through the Barents Sea and reaches the Arctic Point. Passengers then arrive at Franz Josef Land and, with a bit of luck, get to see polar bears.Room for improvementThere are also a variety of Arctic tourism products on offer that meet the needs of different groups, according to data sent by the Shanghai-based tourism company Lvmama to the Global Times on Sunday.Compared with Antarctic tourism, tourists to the Arctic are relatively young, with 65 percent of them born after the 1980s, according to Lvmama."Thanks to the friendly relationship between China and Russia, as well as the beneficial visa policies and more flights, the number of Chinese tourists traveling to Russia has been increasing," according to Lvmama.According to Sputnik, in the first nine months of 2017, 840,000 visa-free Chinese tourists visited Russia, a 24-percent increase compared with 2016."Russia can further improve its Chinese services, high-end hotels and other tourism facilities in order to satisfy the increasing numbers of Chinese tourists," Li Qiuyan, manager of the public relations department, told the Global Times on Monday,In Moscow, Russian tour guides are now being given Chinese language courses so that they can better serve Chinese tourists, Zheng said. There will continue to be great potential in the Russian tourism market in 2018, according to experts.