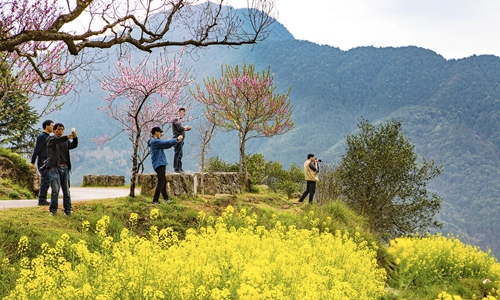 The Chinese tourism industry is likely to see recovery during the upcoming Qingming Festival as domestic travel agencies have received increasing travel inquiries, a welcome reprieve after the two-month chill the sector has been experiencing due to the COVID-19 outbreak.

Online searches for major tourist attractions across the country have seen a 67 percent increase over the past week compared with same time last month, when the country was hit hard by COVID-19, according to a report sent to the Global Times by online travel platform Mafengwo.com.

The report also showed that currently, residents prefer to travel to neighboring areas and many are choosing to travel by car during weekends.

The promotion of "online travel" has played a vital role in the popularity of domestic scenic spots, industry insiders said.

During the outbreak, Mafengwo launched live streaming services for tourist destinations such as Shanghai Wild Animal Park and the Great Wall in Beijing, which have helped the spots gain popularity, said Feng Rao, head of Mafengwo's travel research center.

"As the country gradually controls the virus spread and more scenic spots reopen, my family plans to drive the short trip to the suburb of Changsha (Central China's Hunan Province) during the Qingming Festival," a local resident surnamed Cai told the Global Times on Friday.

"It is lucky that we can go outside but we will still be equipped with protective gear and will not lose our nerve as the virus has not been completely eliminated," Cai said, noting that her plan to travel to Australia this summer has been "regrettably canceled" as the virus spreads widely across the globe.

The domestic tourism industry is likely to experience a turning point during the Qingming Festival and the May Day Holiday, Chinese online travel service provider Ctrip told the Global Times on Friday.

Dai Bin, head of the China Tourism Academy, forecast that the number of trips in the Chinese market will see negative growth of 56 percent in the first quarter, and negative 15.5 percent growth for the whole year.