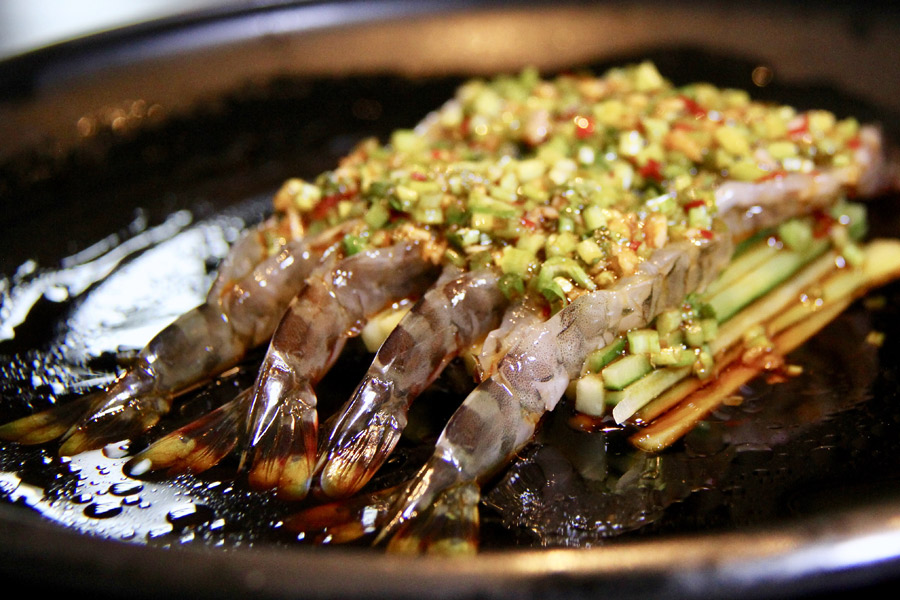 If you are looking to sample the authentic tastes of east Guangdong's Chaoshan region, one standout Beijing eatery is the ideal port from which to set sail on your culinary voyage, Li Yingxue reports.

By the middle of August, the fishing season in the South China Sea reopens after a 108-day hiatus. Hundreds of boats set off to sea, returning with a feast of seafood, large and small, for the dinner tables of Guangdong province: from Chaozhou to Shantou and Zhanjiang to Jiangmen.

Some 2,000 kilometers north of the Chaoshan region, Yang Yingzhong, executive chef at Chao Cafe in Beijing, is busy selecting freshly-caught seafood to update his seasonal menu.

"There are thousands of different types of seafood to choose from, and, as the fishing season continues, an even wider selection of fish appears on the market," says Yang.

As a native of Chaoshan, Yang specializes in bringing his hometown flavors to Chao Cafe, and the new fishing season gives him more opportunity to present authentic Chaoshan cuisine.

Yang is keen on fresh ingredients. According to him, 90 percent of the ingredients he uses are shipped from Chaoshan, and he uses only ingredients during their peak season. "For example, the best time to eat razor clams is June, so I only sell this dish for one month each year," says Yang.

Cold fish rice is a traditional dish in Chaoshan, but it does not contain any rice. Yang says the dish was originally invented by local fishmen.

"When they go out fishing, they usually spend a dozen days at sea. So when their rice supplies ran out, they would cook a few fish from their catch to make a meal, which the fishmen called 'fish rice'," Yang explains.

The fishmen would use seawater to boil the fish, which they would eat when it cooled down, and it gradually became a staple dish in the Chaoshan region.

Yang's cold fish dish can be made with various kinds of seafood, from frozen hard-shell crab to squid and yellow croaker.

Salted ingredients are another tradition from Yang's hometown, where seafood is frozen for one night before being salted, covered in sauce and eaten raw. At Chao Cafe, Yang has only added one such dish-salted shrimp-to the menu as he thinks people from the north are not very familiar with this way of eating seafood.

Yang has upgraded the dish so that the live shrimp is marinated in a sauce which includes coriander, sesame oil, chili oil and soy sauce for 10 minutes.

Deep-fried Puning bean curd is a must-try with Chinese chive sauce. The outside of the tofu is crisp, and the inside is as tender as egg tofu.

The soybeans grown in Puning, Guangdong province, are famed for their quality and rich flavor, which is equally apparent in Puning bean curd and Puning fermented soy bean sauce.

The sauce is an important seasoning in Chaoshan cuisine. It's also the key ingredient for several of Yang's signature dishes. The sauce is saltier than most others and it releases its aroma when it's boiled with seafood.

"Sixty percent of my dishes use Puning soy bean sauce. For some of them, it's not that obvious on the surface, but the flavor often comes from the sauce, such as my steamed fish dishes. I usually brush the fish with soy sauce before steaming them," says Yang.

The crabs are marinated with Puning soy bean sauce before they're boiled in a pot, where Yang places a layer of onion mixed with ginger on the bottom. After 18 minutes, Yang adds more Puning soy sauce to the mix before leaving it to cook thoroughly.

"The first step imbues the crab meat with the flavor of the sauce, while the second adds the aroma of Puning sauce to the dish," Yang explains.

There is also a type of "lion's head" fish which can be boiled with Puning soy bean sauce. "The fish has fins that fan out when it senses danger, which resembles a lion's mane," Yang explains.

Threadfins can be cooked in several ways-steamed with plum sauce, boiled with soy sauce or steamed with preserved vegetables.

Marinated dishes are also typical of Chaoshan cuisine, where the goose dishes are a highlight. Each part of the bird-head, feet, breast, wings or liver-has its own special flavor when marinated. Marinated goose head is seen as the ultimate poultry dish from the region.

According to Yang, the best goose meat comes from the birds in their first year, and the feet and wings are edible in older birds, but the heads are not edible until the geese reach their fourth year.

"The other parts of a 4-year-old goose are not that delicious. That's why the head is so expensive," says Yang.

Boiled and sliced Zhanjiang-style chicken is a dish that uses free-range chickens aged between 120 and 130 days that are sourced from the city in the southwest of Guangdong.

Moving to Beijing in 2008, Yang joined the team at Chao Cafe two years ago. When he first arrived in Beijing, he discovered that most Chaoshan restaurants in the capital seemed rather expensive, but over the past few years, he has noticed more small restaurants specializing in Chaoshan cuisine have been popping up across the city.

"The key to Chaoshan cuisine is its unique, fresh ingredients, which can never be replaced. Each season, there are different fresh ingredients to cook," says Yang. "My goal is simply to take the authentic flavors from my hometown to distant corners of the world."