Tourism in the Xinjiang Uygur autonomous region is seeing a continuous boom as the region has emerged as a popular destination for travelers looking to avoid the summer heat. 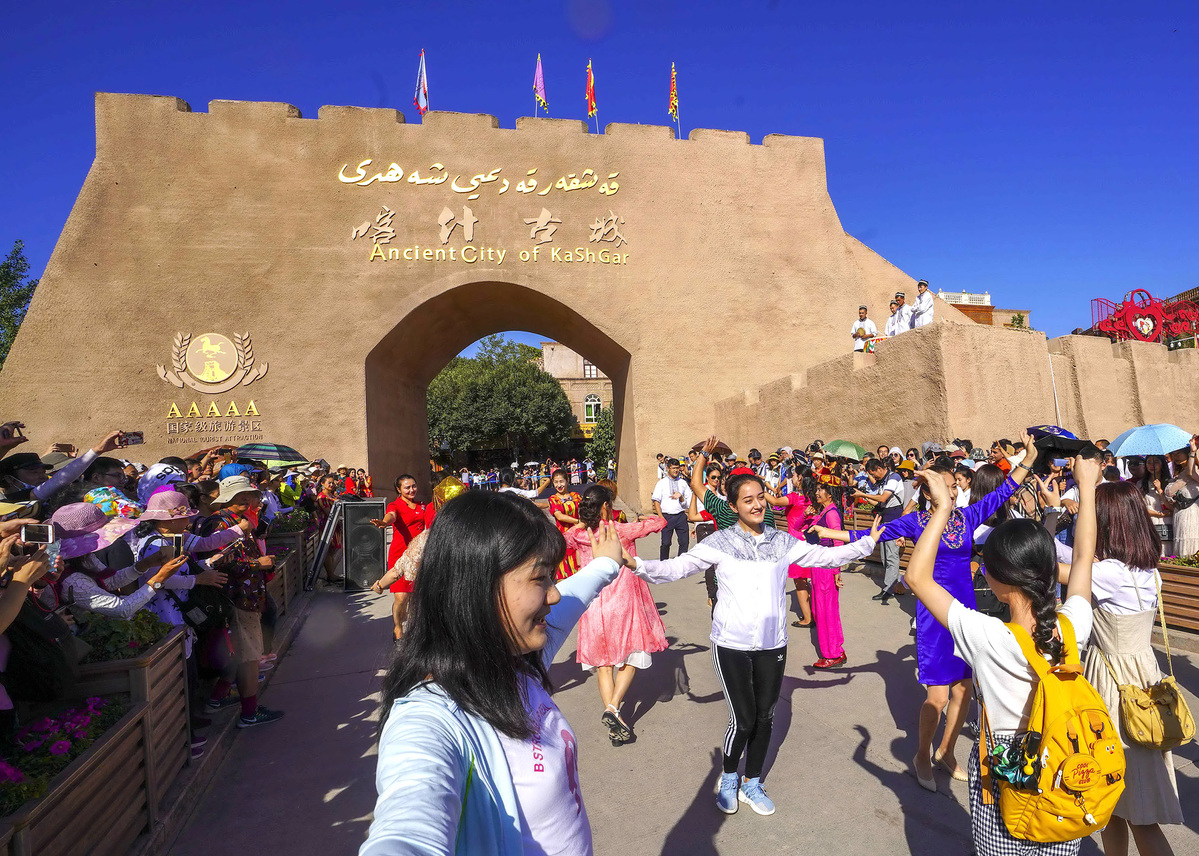 Tourists and staff of the Ancient City of Kashgar in the Xinjiang Uygur autonomous region dance together at a ceremony earlier this month. The scenic area received more than 310,000 visits in the first half of this year, a year-on-year growth of more than 90 percent. (Photo: Xinhua)

Ctrip, an online travel service, reported earlier this month that Urumqi, the region's capital, was included for the first time this year as one of the top 10 domestic destinations to spend summer holidays because its mountainous areas enjoy cooler weather.

According to the China Tourism Academy, a destination suitable for avoiding the summer heat should meet two requirements: the temperature should be between 18 C and 28 C, and the place should have abundant tourism facilities and a low risk of disasters.

Attractions in Urumqi, such as the Tianshan Grand Canyon and Baiyun International Ski Resort, meet those standards.

Moreover, destinations such as the Kanas National Geopark, Tekes county and Kashgar attract travelers because of their rich, natural and cultural resources, as well as the pleasant weather.

Early in June, online travel platform Mafengwo and Tencent released their top 10 domestic destinations for summer tourists. Among the areas listed were the region's Ili Kazak autonomous prefecture and Altay in the north, and Kashgar in the south.

Ye Jing, a 30-year-old from Beijing, was impressed with the landscape and weather of the Kanas National Geopark in Altay after she had just arrived.

"The weather is quite cool here, especially at night when I have to put my jacket on," she said. "It's a very pleasant summer season here compared with Beijing, as the temperature in Beijing is almost 40 degrees! It's a good place to escape from the heat."

The geopark has seen a travel boom in the last two months thanks to the pleasant climate. It has received about 2.6 million visitors since May 1, up 62 percent year-on-year, according to the geopark's administrative office.

Zhang Xiaoyu, general secretary with the region's tourism association, said that Xinjiang is diversified in natural and cultural resources where cooler weather can easily be found in its mountainous and northern areas.

"Temperatures and climate are very diverse in different parts of the region," he said. "For example, the temperature of Turpan in summer can reach as high as 40 degrees, but in Kanas, the average temperature in summer is around 25 degrees and even lower in areas surrounded by mountains or waters."

According to him, the region received about 151 million visitors in 2018. Nearly 70 percent of those visitors came during the region's peak season from June to September.