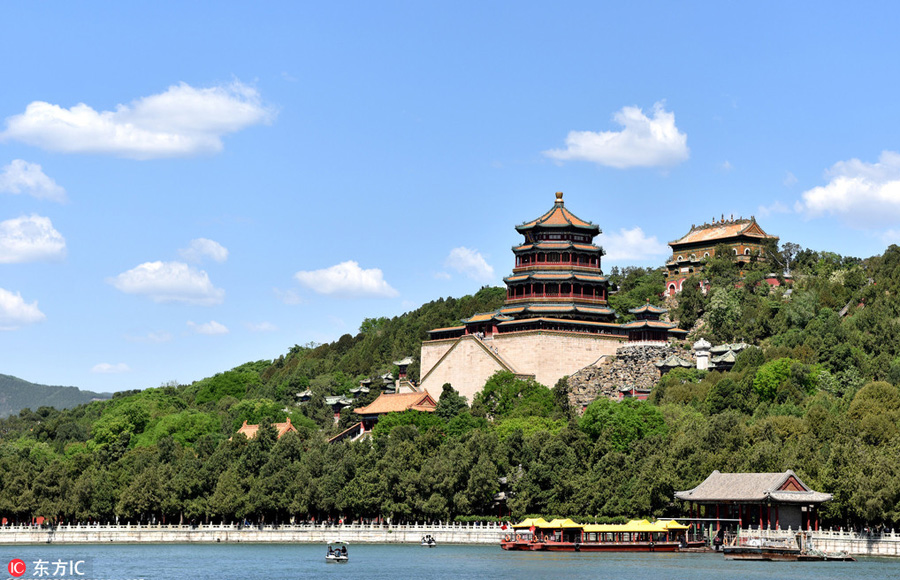 More than 3,700 activities will be held across China to celebrate this year's cultural and natural heritage day, according to the Ministry of Culture and Tourism.

The Chinese government has approved to designate the second Saturday of every June as the cultural and natural heritage day since last year.

China now has 52 sites inscribed on the UNESCO World Heritage list, which was established to safeguard unique and irreplaceable cultural and natural sites around the world.

Let's take a look at 20 cultural heritage sites in China, which may give you some clues on your trips.

You can read more at here.

The Summer Palace, originally named Qingyi Yuan, or the Garden of Clear Ripples, was an imperial garden constructed in 1750 by Emperor Qianlong in a bid to celebrate his mother's birthday. During the past few centuries, emperors and empresses spent their leisure time there, which is of great aesthetic value today.

The site in Beijing is an outstanding expression of the creative art of Chinese landscape garden design, incorporating the works of man and nature in a harmonious manner.

The Summer Palace was added to the list in November 1998. 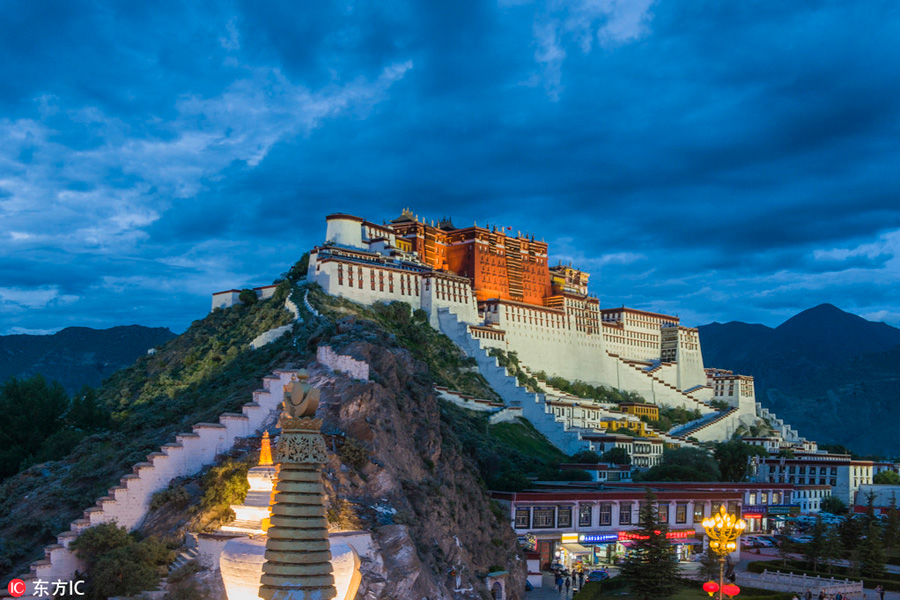 The Potala Palace, winter palace of the Dalai Lama, has symbolized Tibetan Buddhism and its central role in the traditional administration of Tibet since the 7th century.

The complex, made up of the White and Red Palaces with their ancillary buildings, is built on Red Mountain in the center of Lhasa Valley, at an altitude of 3,700 meters.

The Potala Palace, Jokhang Temple Monastery and Norbulingka were added to the list respectively in 1994, 2000 and 2001. 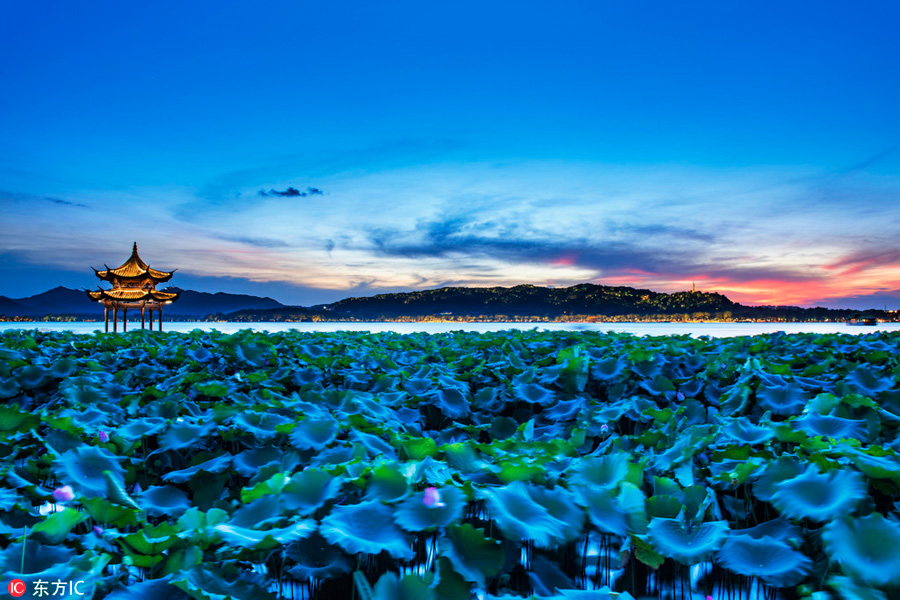 West Lake is situated in Hangzhou, Zhejiang province in eastern China. Comprising the West Lake and the hills surrounding its three sides, West Lake Cultural Landscape of Hangzhou has inspired famous poets, scholars and artists since the 9th century.

It comprises numerous temples, pagodas, pavilions, gardens and ornamental trees, as well as causeways and artificial islands. These additions have been made to improve the landscape west of the city of Hangzhou to the south of the Yangtze River.

The West Lake Cultural Landscape of Hangzhou was added to the World Cultural Heritage List in 2011. 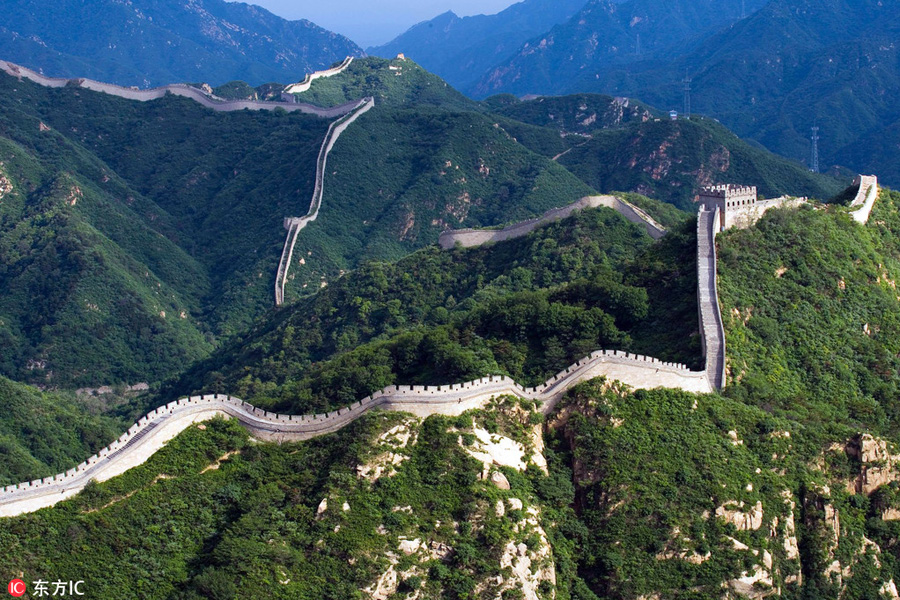 Just like a gigantic dragon, the Great Wall winds up and down across deserts, grasslands, mountains and plateaus, stretching from east to west of China.

It begins in the east at Shanhaiguan in Hebei province and ends at Jiayuguan in Gansu province to the west. Its main body consists of walls, horse tracks, watch towers, and shelters on the wall, and includes fortresses and passes along the Wall.

With a history of more than 2,000 years, some of the sections are now in ruins or have disappeared. However, it is still one of the most appealing attractions all around the world owing to its architectural grandeur and historical significance.

The Great Wall, one of the greatest wonders of the world, was listed as a World Heritage by UNESCO in 1987. 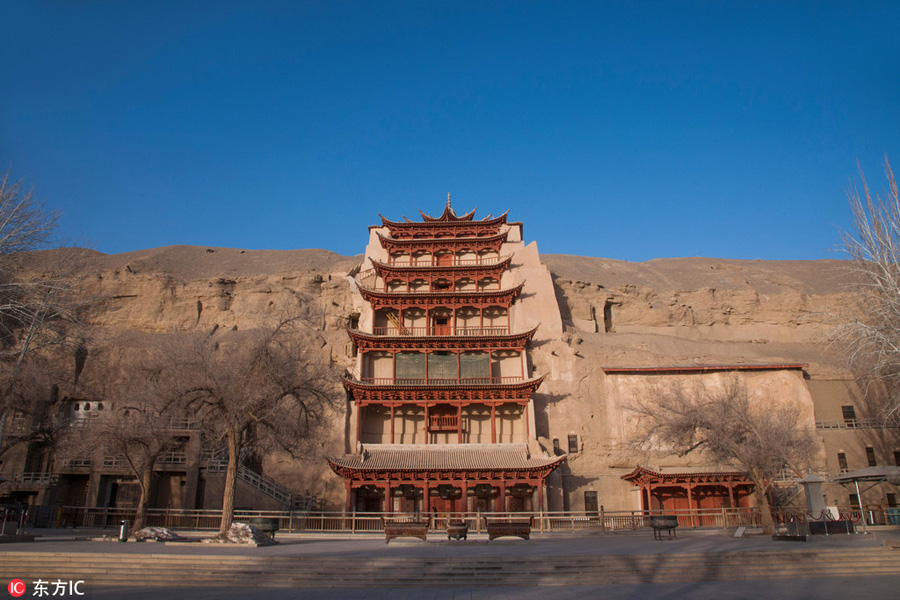 Located on south-east of the Dunhuang oasis, Gansu province, the Mogao caves, also known as the Thousand-Buddha Caves, are the world's largest, most richly endowed, and longest used treasure house of Buddhist art. They are located at a strategic point along the Silk Road, at the crossroads of trade as well as religious, cultural and intellectual influences.

According to historical records, the carving of the caves started in 366 AD and continued for about 1,000 years. The 492 well-preserved cells and cave sanctuaries in Mogao, housing about 45,000 square meters of murals and more than 2,000 painted sculptures, are well-known for their statues and wall paintings. The painted clay figures vary greatly in size, with the largest one being 33 meters high and the smallest only 10 centimeters.

The Mogao Caves were added to the list in December 1987. 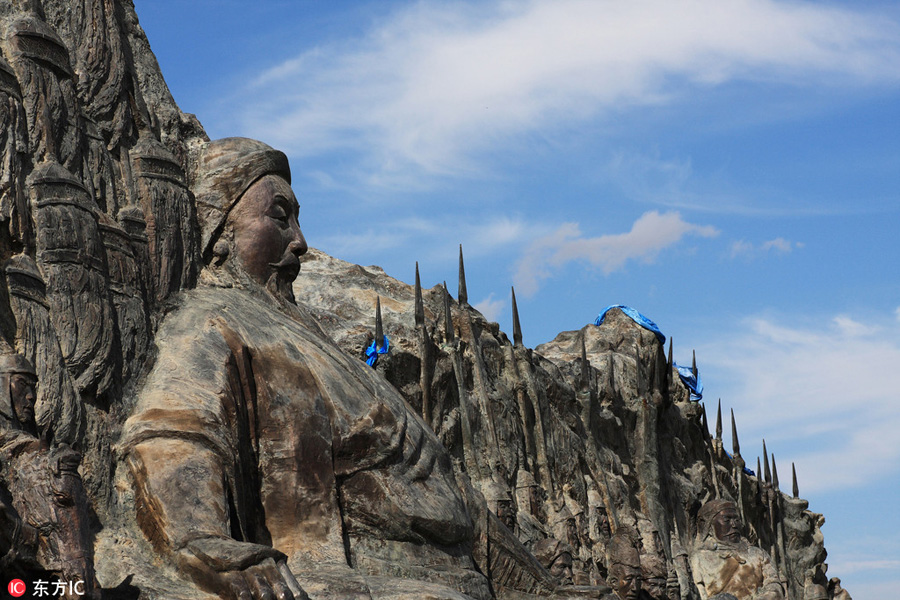 Xanadu was the capital of Kublai Khan's Yuan Dynasty in China, located north of the Great Wall.

It encompasses the remains of Kublai Khan's legendary capital city, designed by the Mongol ruler's Chinese advisor, Liu Bingzhong, in 1256. It was an attempt to assimilate the nomadic Mongolian and Han Chinese cultures.

The site was planned according to traditional Chinese feng shui in relation to the nearby mountains and river. It features the remains of the city, including temples, palaces, tombs, nomadic encampments and the Tiefangang Canal, along with other waterways. 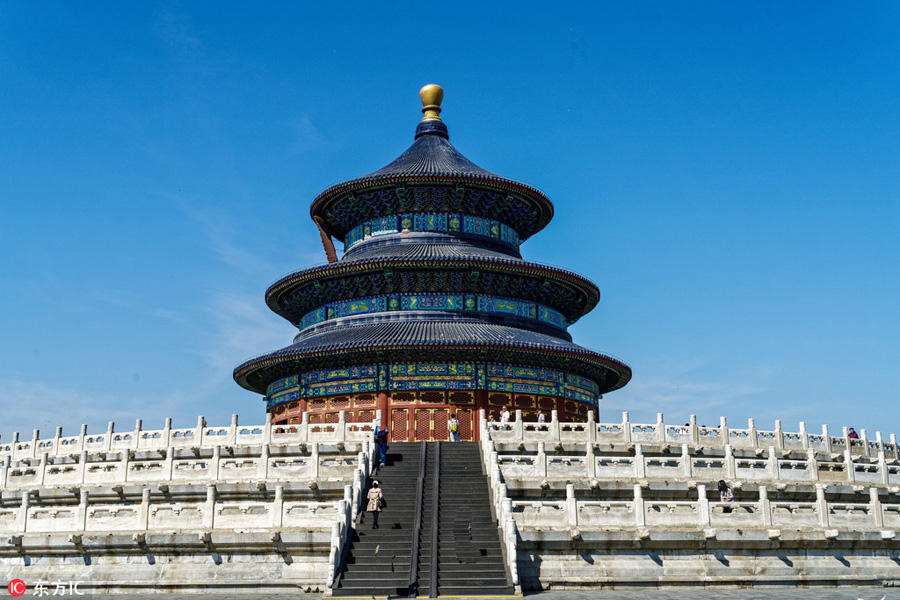 Temple of Heaven: an Imperial Sacrificial Altar in Beijing

7. Temple of Heaven: an Imperial Sacrificial Altar in Beijing

Located in the southern part of Beijing, the Temple of Heaven is a magnificent complex of fine cultural buildings set in gardens and surrounded by historic pine woods.

It has been one of the most sacred places for the whole country for more than five centuries. It served as a complex of sacrificial buildings for the Ming and Qing emperors, and is the largest one in Beijing among several royal altars to Heaven, Earth, the Sun, the Moon and other deities or symbolic forces of nature. 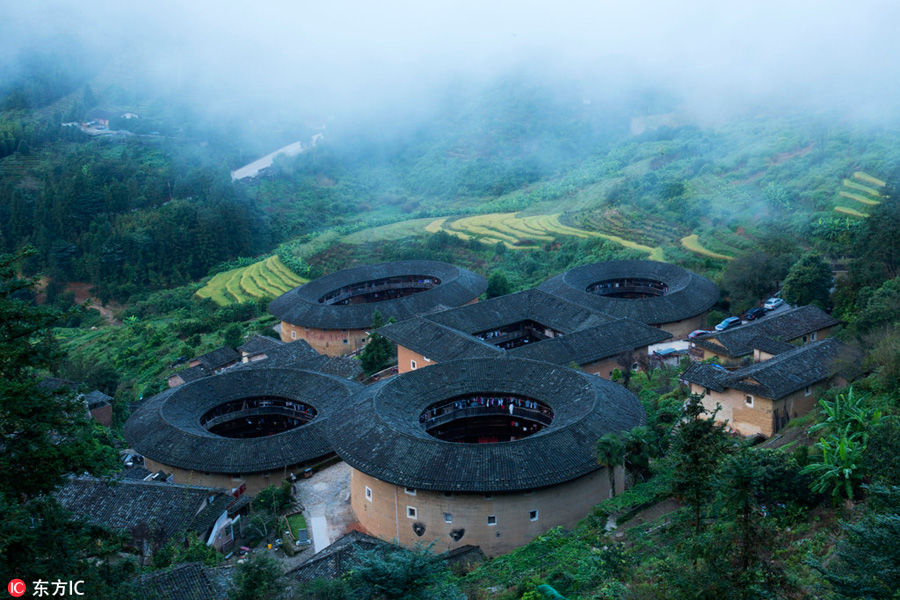 Fujian tulou consists of 46 buildings constructed between the 15th and 20th centuries over 120 kilometers in the south-west of Fujian province, inland from the Taiwan Strait.

They are inscribed as exceptional examples of a building tradition and their function exemplifies a particular type of communal living and defensive organization.

In terms of their harmonious relationship with their environment, they are an outstanding example of human settlement. 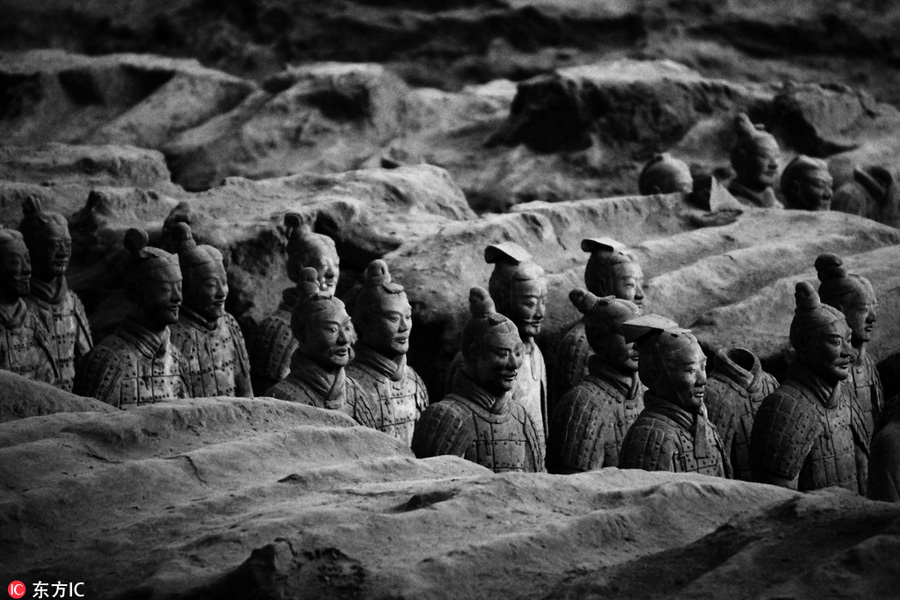 Mausoleum of the First Qin Emperor

9. Mausoleum of the First Qin Emperor

The Mausoleum of the First Qin Emperor containing terracotta warriors and horses are located in Lintong county, near Xi’an city, capital of Shaanxi province. Constructed from 246 BC to 208 BC, the mausoleum was the first of its kind in Chinese history.

With a height of 76 meters, the mausoleum is laid out in line with the dimensions of Xianyang, the capital of the Qin Dynasty. It is composed of the inner compound and the outer compound, which have perimeters of 2.5 km and 6.3 km, respectively. The tomb is located in the southwest of the inner compound.

It was listed as a cultural heritage site by UNESCO in December, 1987. 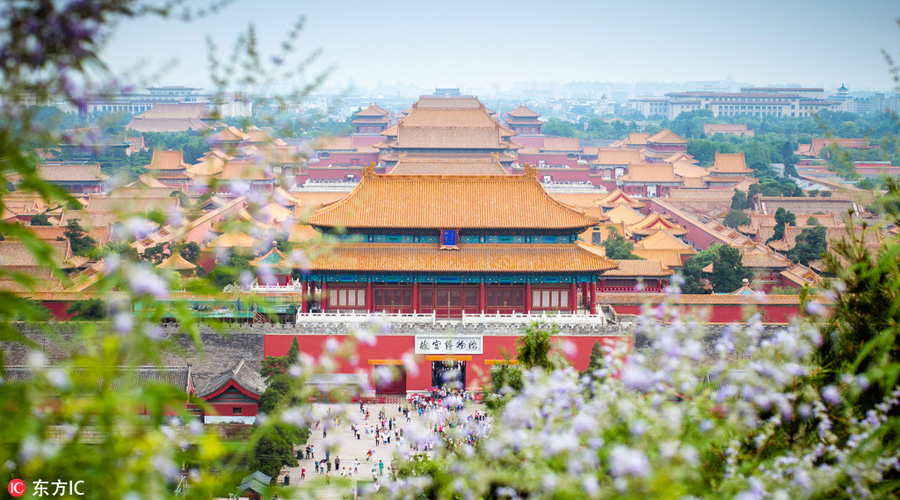 10. Imperial Palaces of the Ming and Qing dynasties in Beijing and Shenyang

The Forbidden City, located in the center of Beijing, used to be the imperial palace of the Ming and Qing dynasties. Its construction started in 1406, and was completed in 1420.

In 1924, the imperial family of the Qing Dynasty was removed from the Forbidden City, and in 1925 the Palace Museum was established here.

The Imperial Palaces of the Ming and Qing dynasties in Beijing and Shenyang were added to the World Heritage List in 1987 and 2004. 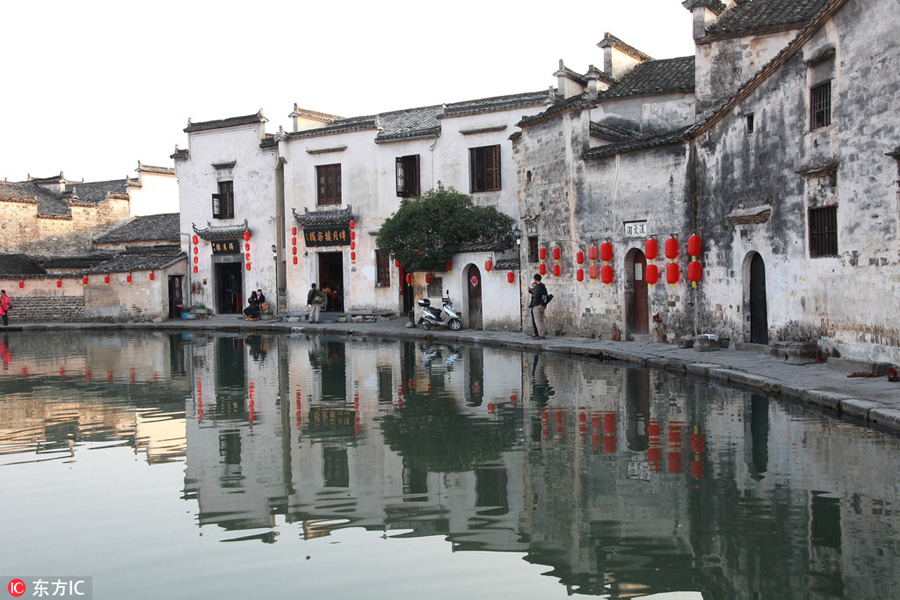 The overall layout, landscape, architectural form, decoration and construction techniques all retain the original features of Anhui villages between the 14th and 20th centuries.

They were added to the World Cultural Heritage List in 2000. 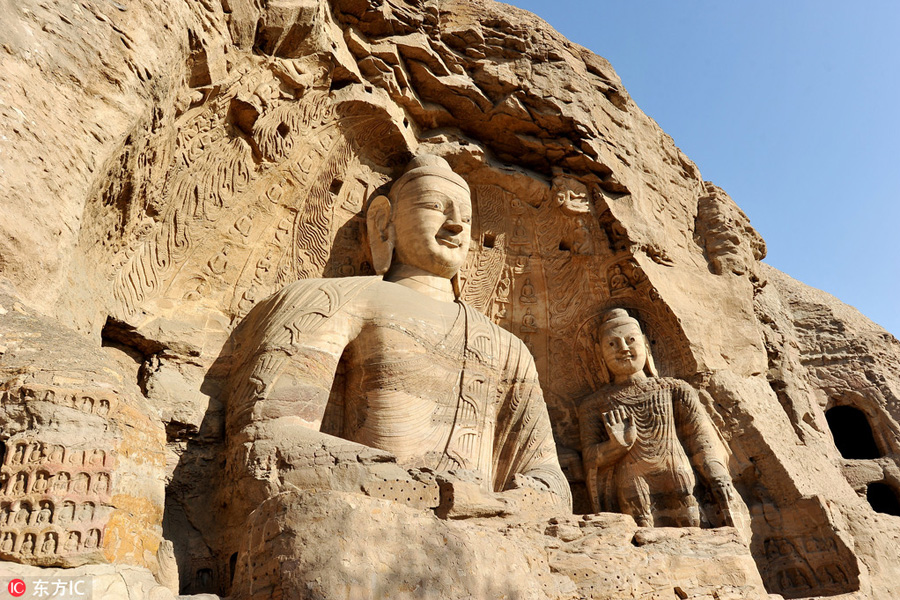 Located at the southern foot of the Wuzhou Mountain, some 16 km west of Datong city, Shanxi province, the Yungang Grottoes were built against the mountain and extend about one km (0.62 miles) from east to west.

Comprising 252 caves and 51,000 statues within a carved area of 18,000 square meters, Yungang Grottoes represent the outstanding achievement of Buddhist cave art in China during the 5th and 6th centuries.

The Five Caves created by Tan Yao, with their strict unity of layout and design, constitute a classical masterpiece of the first peak of Chinese Buddhist art.

Yungang Grottoes were added to the World Cultural Heritage List in December 2001. 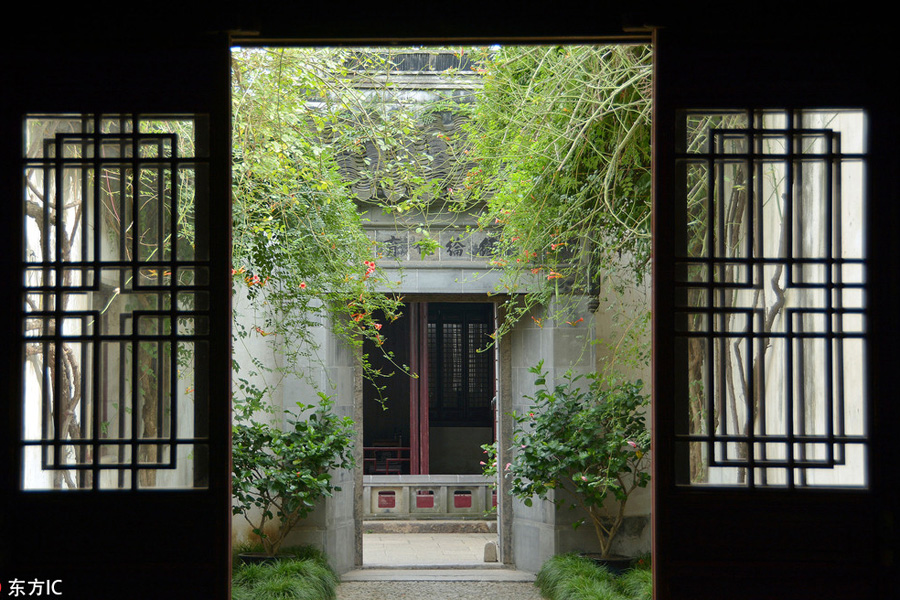 Classical Chinese garden design, which seeks to recreate miniature natural landscapes, is not illustrated any better than in the nine gardens in the historic city of Suzhou, Jiangsu province.

Suzhou’s classical gardens are noted for their exquisite design and layout. Landscape and buildings are perfectly integrated to create a great harmony between man and nature.

They were added onto the World Cultural Heritage List in 1997. 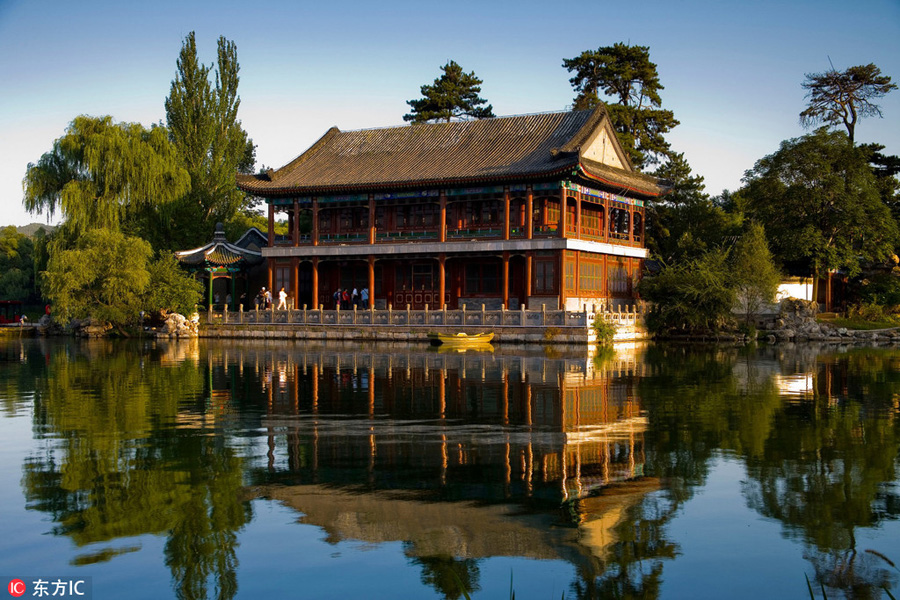 In terms of the general layout, architectural styles, construction techniques, decoration details and garden landscape, the Mountain Resort, a vast complex of palaces and administrative and ceremonial buildings built between 1703 and 1792, represents the broad exchange and convergence between Han culture and the ethnic cultures - Confucianism, Buddhism and Taoism - and the architectural styles between China's north and south.

Covering a total area of 611.2 hectares, the Mountain Resort has temples of many architectural styles and imperial gardens blend effortlessly into a landscape of lakes, pastureland and forests. 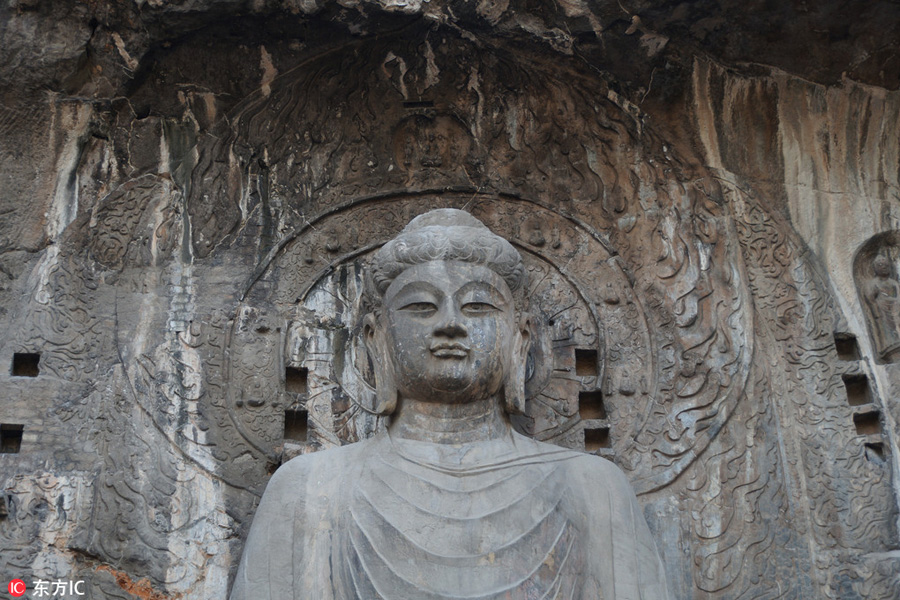 These grottoes reflect the heyday of Tang Dynasty culture (618-907).

Located 13 km south of Luoyang, Henan province, the Longmen Grottoes are concentrated on the east and west cliffs of the Yishui River, and stretch for one km. Work started on the grottoes around the year 493, during the Northern Wei Dynasty, and continued for the next 400 years.

Large numbers of memorial texts and inscribed stone tablets at the Longmen Grottoes, like the Twenty Gems of Longmen Calligraphy and Zhu Suiliang’s stone tablets, are considered rare treasures of Chinese calligraphy.

The Zhu Suiliang Inscription, made in 641 in honor of the mother of the fourth son of Emperor Taizong, is one of them.

The Longmen Grottoes was added to the list on November 30, 2000. 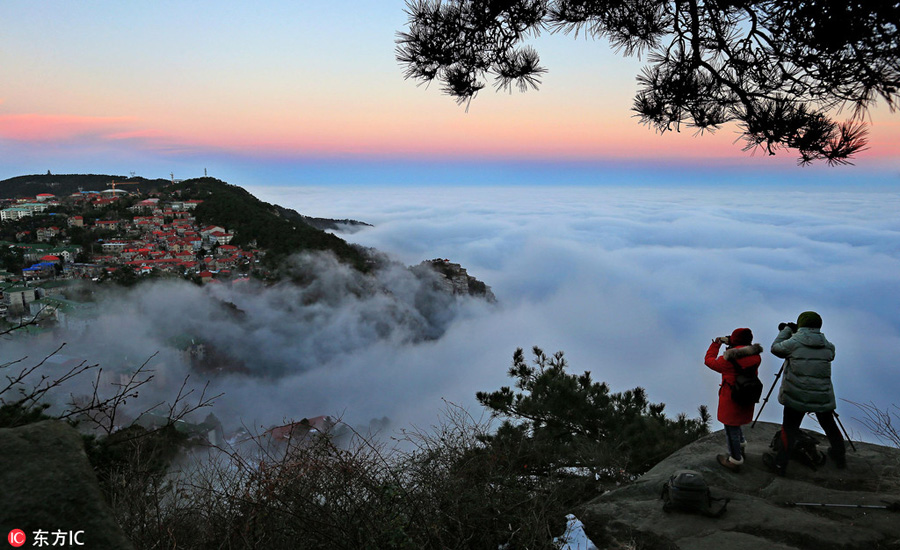 Situated in the northern part of Jiangxi province, Lushan Mountain is one of China’s most renowned mountains. Lushan National Park, which was inscribed on the World Heritage List in 1996, is a prominent tourist attraction that lures millions of tourists each year.

Apart from its breathtaking natural scenery, Lushan is the birthplace of Chinese landscape poetry, plus, the famous Lushan Plenum represents its role in China’s political evolution.

The Lushan National Park was added to the list in December, 1996. 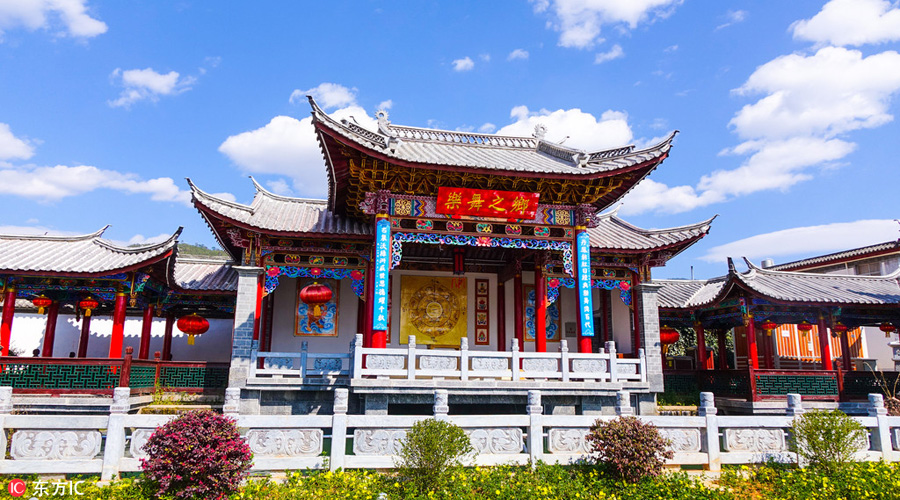 The Old Town of Lijiang, lying on the Lijiang plain at an elevation of 2,400 meters in southwest Yunnan province of China, is one of the last surviving ancient towns in China.

It has been perfectly adapted to the uneven topography of this key commercial and strategic site and preserved a historic townscape of high quality and authenticity.

The architecture of the Old Town of Lijiang is noteworthy for the blending of elements from several cultures, and its ancient water-supply system of great complexity and ingenuity still functions effectively today.

The Old Town of Lijiang was added to the list in December 1997. 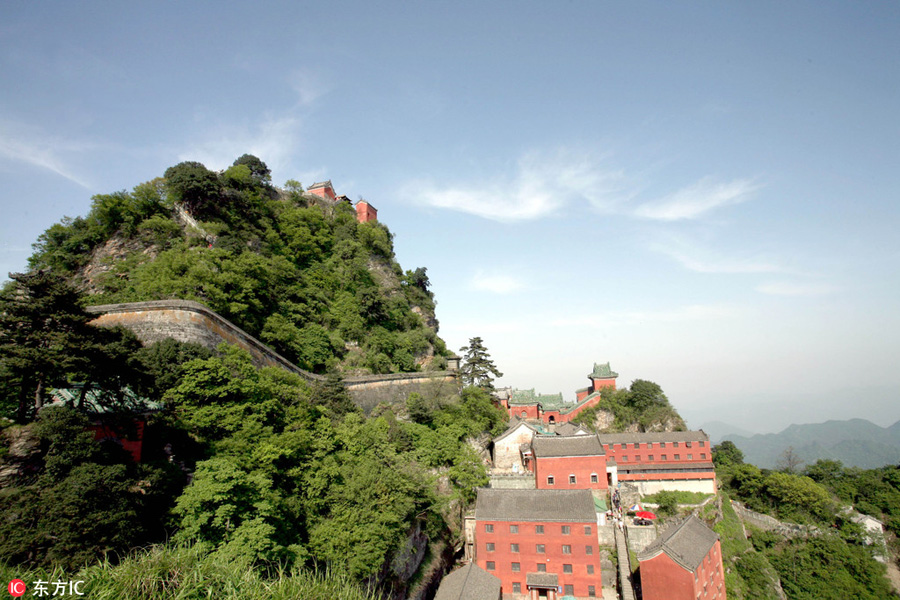 Located near the city of Danjiangkou in central Hubei province, the Wudang Mountains are home to a famous complex of ancient palaces, temples and Taoist buildings dating back to the 7th century.

It represents the highest standards of Chinese art and architecture over a period of nearly 1,000 years.

The ancient building complex was added to the World Cultural Heritage List in 1994. 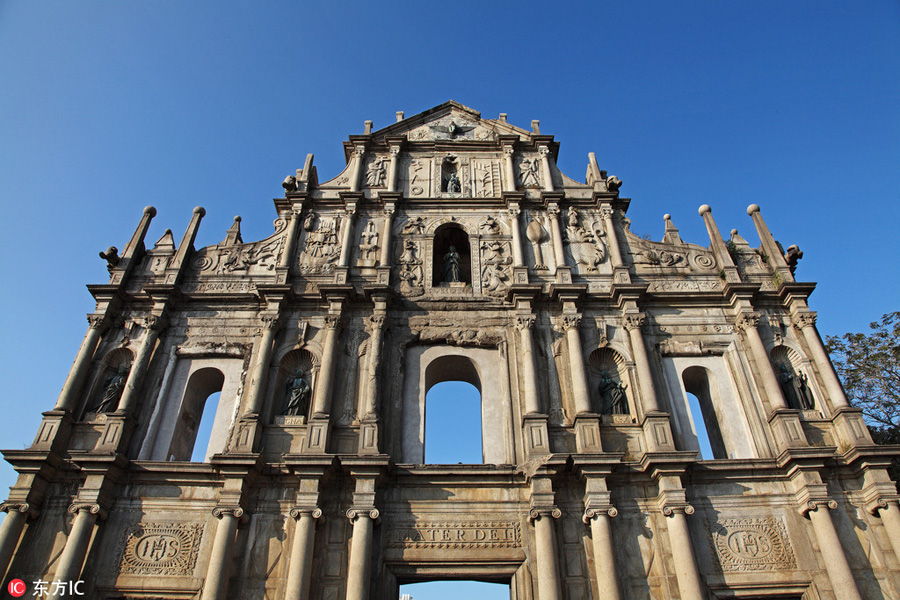 The center is a solid testimony of the city’s missionary role in the Far East while also reflecting the dissemination of Chinese folk beliefs to the Western world.

It is the product of East-West cultural exchanges, forming the most unique blend of cultural heritage existing in China’s historic cities. 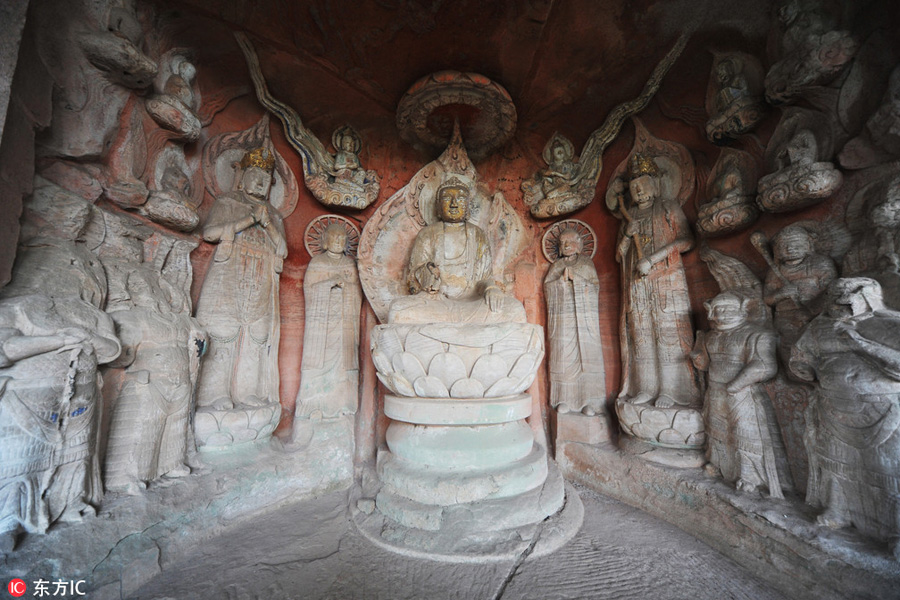 The Dazu Rock Carvings are located in Dazu county, Chongqing. Construction began in 650, and continued into the 17th century.

The rock carvings are an outstanding example of China’s grotto art in the middle and late period of ancient China.

So far, 50,000 statues and 100,000 inscribed with Chinese characters have been identified and 75 cliff statue sites are under state protection.

Dazu was added to the World Heritage list on December 1, 1999.