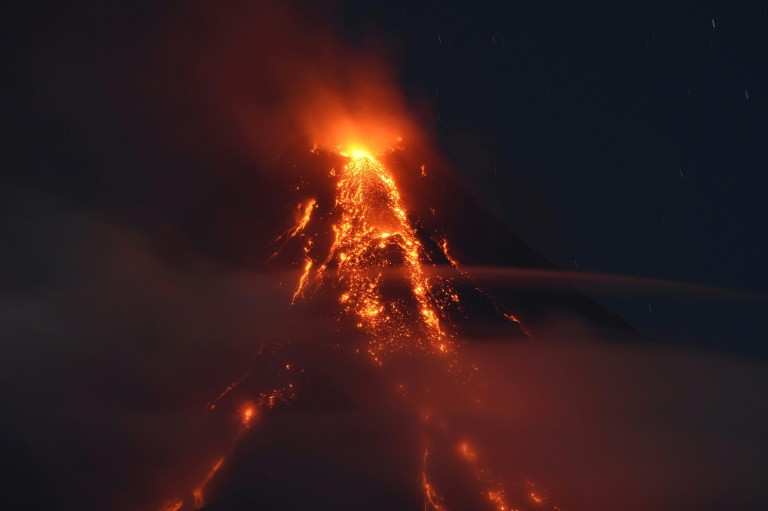 The Mayon volcano has been emitting flaming lava and giant clouds of superheated ash. Photo: AFP

Millions of tonnes of ash and rock from an erupting Philippine volcano could bury nearby communities due to heavy rain, authorities said Saturday, as tens of thousands flee over fears of a deadly explosion.

The official Philippine Institute of Volcanology and Seismology (Phivolcs) issued the warning as heavy rains lashed the area surrounding the Mayon volcano, which has been emitting flaming lava and giant clouds of superheated ash for the past week.

Rainwater could combine with the volcanic ash and rock to form deadly, fast-moving mudflows -- called "lahars" -- that could sweep away entire settlements, it said.

"The important thing is to move out in case of heavy rains... this is a precautionary measure," Phivolcs chief Renato Solidum told AFP.

The institute earlier said that 25 million cubic metres (about 883 million cubic feet) of ash and other volcanic material had recently been emitted by Mayon, settling on its slopes and elsewhere nearby.

It warned that this could result in lahars flowing into waterways, and called on officials to move residents near rivers to higher ground.

An explosion of the 2,460-metre (8,070-foot) Mayon in August 2006 did not directly kill anyone but four months later, a typhoon unleashed an avalanche of volcanic mud from its slopes that claimed 1,000 lives. 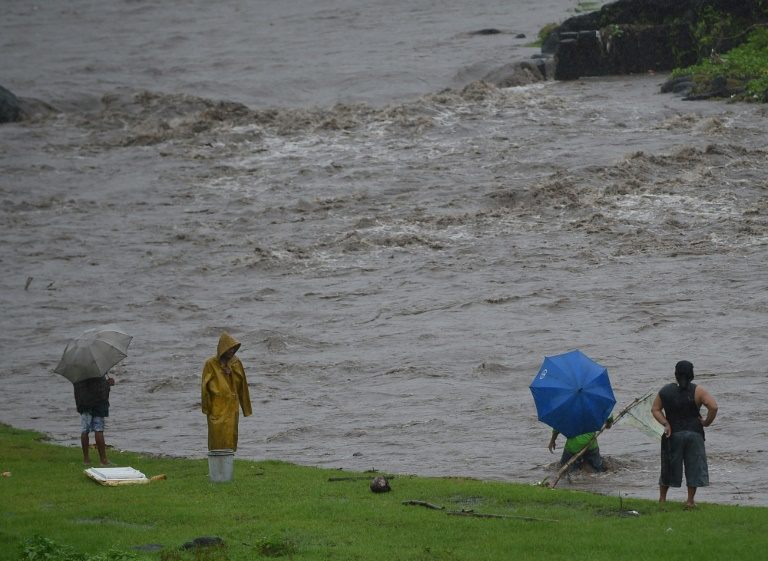 Phivolcs said Mayon had emitted fountains of lava on Friday but bad weather was preventing observation of the volcano's activity on Saturday.

Residents living by a river in Daraga town in Albay province expressed fear of a repeat of the 2006 incident.

"We are worried that lahar will flow again. We cannot sleep soundly at night. We sleep like chickens, waking up at the slightest rumble of the volcano," Virginia Tuscano, 47, told AFP as rain poured outside her home.

"Back in 2006 the lahar flow was so powerful it was like waves sweeping away even homes made of cement."

The mother-of-three said she had packed her bags and was ready to leave her home.

Observers saw a shroud of steam covering the entire mountain as heavy rain met the hot lava and volcanic material on Mayon's slopes.

Steam could also be seen rising from the volcano's crater as rainwater entered its interior.

Volcanic mudflows are a perennial problem during and after volcanic eruptions in the Philippines, which sits on the "Ring of Fire" -- islands in the Pacific that were formed by volcanic activity.

The government has already evacuated more than 84,000 people from a "danger zone" stretching as far as nine kilometres (six miles) around Mayon over fears of a possible deadly eruption.

However, the rains were also washing away the thick, choking carpet of ash that has covered many communities in the shadow of Mayon in the past week, Daep said.

"The rains also washed away the ashes on grasslands. That means that cattle could now feed on the grasses which they could not do in the past days," he added.

Mayon, located about 330 kilometres (205 miles) southeast of the capital Manila, is the most active of the country's 22 volcanoes -- and one of the deadliest.

Four foreign tourists and their local tour guide were killed when it last erupted in May 2013.

In 1814, more than 1,200 people were killed when lava flows buried the nearby town of Cagsawa.