TRAVEL Dining in a place where 'plov is love'

Dining in a place where 'plov is love' 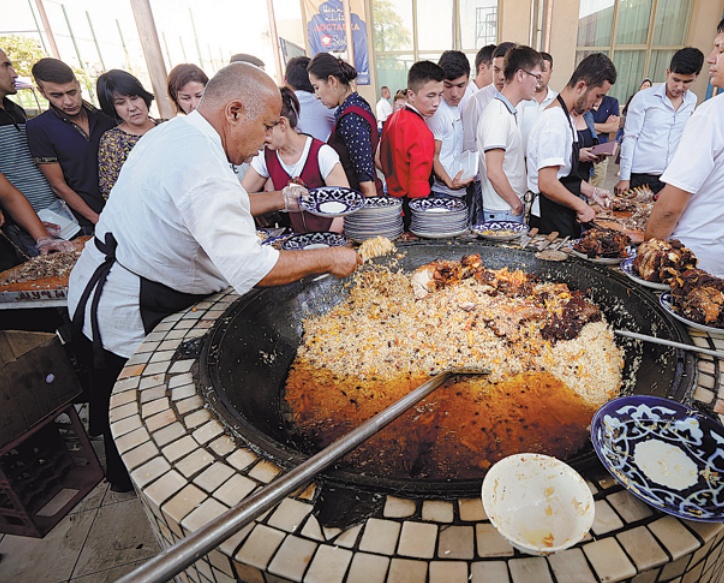 People wait in a long line for Uzbek plov in the Central Asian Plov Center, an opera house-like restaurant, in Tashkent.

Cuisine is an accessible path to learn about a country. And Uzbekistan's gastronomy is also a way to know about the countries that surround it.

Uzbekistan is landlocked in the heart of Central Asia. So, its fare is highly influenced by nearby nations.

To the east lies China, which brought ingredients like soy sauce, ginger and vinegar. A dish where this influence is most clear is lagman－a hearty meat stew with hand-pulled noodles.

Swing south, and you'll find Afghanistan, Pakistan and India, whose spices are similar to those used in Uzbek cooking.

To the north is Russia, which still exerts particular influence on the gastronomy following Uzbekistan's Soviet past. Dill, for instance, is ubiquitous.

But among all these cuisines, Uzbek plov, or osh in the Uzbek language, is the undisputed king of Uzbekistan fare. Hence, the old Uzbek saying: "Plov is love."

People in various Uzbek regions have their own plov recipes.

For instance, people in Bukharan prepare plov with green gram, while Fergana-style plov is brown.

In Samarkand, people steam layers of meat, carrots and rice. In Tashkent plov, all ingredients are roasted at the beginning.

Although often prepared at home, plov is made on special occasions by an oshpaz (osh master chef), who cooks it over an open flame, sometimes serving up to 1,000 people from a single caldron on holidays or such occasions as weddings.

Oshinahor, or "morning plov", is served in the early morning (between 6 and 9 am) to large gatherings, typically as part of an ongoing wedding celebration.

In the capital's center, right next to the landmark Tashkent Television Tower, is an opera house-like restaurant called Central Asian Plov Center.

You might question the restaurant owner for giving the establishment such an "arrogant" name. But when you walk into its yard, you see how much local people savor the taste.

The Plov Center prepares 1,500 kilograms of plov a day and sells out in a couple of hours.

Sit in the bustling dining hall, and you'll be brought a lagan (a large painted platter) layered first with rice, then spiced shredded carrots, followed by an unctuous piece of slow-cooked beef or lamb and a scattering of quails eggs.

It truly is the taste of a central nation in Central Asia, in every sense.