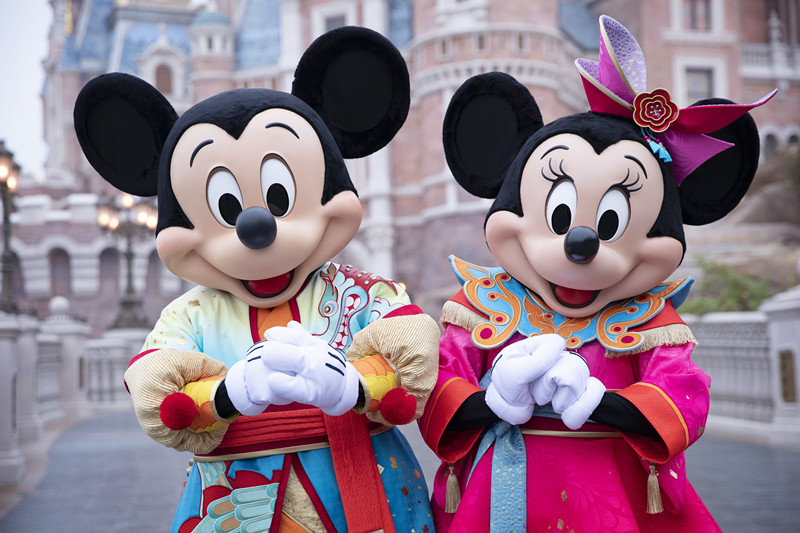 Mickey and Minnie Mouse greet visitors while dressed in costumes made specially for the Year of the Mouse celebrations at Shanghai Disneyland, in Shanghai, Jan. 9, 2020. (Photo: Shanghai Disney Resort)

The upcoming lunar new year in the Chinese zodiac is the Year of the Mouse, which could not be more perfect for a company that "was all started by a mouse," as its founder Walt Disney once famously said.

From Jan. 13 to Feb. 9, 2020, visitors to Disneyland can get in the festive mood with traditional decorations across the resort, the return of beloved entertainment shows, new merchandise, incredible Spring Festival dining and much more, a publicist from the resort said.

The resort hosted a special Spring Festival event to introduce its brand-new holiday festivities, and included a sneak peek at the exclusive Spring Festival outfits which will be worn by Mickey and Minnie, Donald and Daisy, Goofy, Pluto, Chip 'n' Dale, Duffy and other Disney friends inside a ballroom of Shanghai Disneyland Hotel. Throughout the holiday, visitors will have the opportunity to meet these characters around Mickey Avenue, who will be dressed in their Spring Festival outfits.

These new costumes were inspired by the bustling city streets during Spring Festival, capturing an air of traditional culture, performances, games and food, while incorporating colorful and flamboyant street market features. And for a limited-time at the resort: between Lunar New Year’s Day on Jan. 25 and Lantern Festival on Feb. 8, Mickey and Minnie will welcome visitors in stylish new costumes created by famed Chinese designer Guo Pei, beneath special red and gold lanterns lining Mickey Avenue.

In celebration of the Year of the Mouse, Shanghai Disney Resort will be filled with an array of Mickey and Minnie elements within a unique festival atmosphere, featuring a mix of traditional and reimagined decorations. Those looking to add some “Disney magic” to their Spring Festival greetings, can now also enjoy special Disney-themed filters on their smartphones.

What’s more, the Garden of the Twelve Friends will be transformed into a New Year’s "Wishing Garden" with decorations adorning the Year of the Mouse mosaic. Another Spring Festival tradition also returns, as visitors can record their hopes for the coming year on special wishing cards at select meet-and-greet locations and in the Wishing Garden.

Each morning throughout the entire holiday period, visitors can soak up the season's good fortune during Mickey and Minnie's drum ceremony in the Gardens of Imagination. In late mornings and early afternoons, Mickey and friends will be joined by dancers wearing vintage Shanghai-style clothing, harking back to the city's golden age of jazz and swing.

As evening falls across the park, people are invited to experience the wonder of the "Spring Festival 2020 Firework Celebration: Our Families." Following the "Ignite the Dream – A Nighttime Spectacular of Magic and Light" routine, a new fireworks show will be staged every day throughout the holiday period, including projections on the castle of families from beloved classic Disney movies as well as traditional Chinese elements such as calligraphy, lanterns and Spring Festival blessings.

Shanghai Disneyland Hotel is offering an exclusive Spring Festival Banquet on Jan. 23 and 24, 2020 at the hotel's Cinderella Ballroom, while Disneyland has prepared delicious dishes and family reunion feasts in its many other restaurants, as well as Mickey-shaped treats and sweets.

Throughout the holiday period, there will also be a special Spring Festival carnival in Disneytown, featuring Lion Blessing and Dragon parades, as well as a series of tents hosting craft stalls, food booths, DIY workshops and other activities.

Shanghai Disney Resort previously announced that after eighteen months of unforgettable entertainment at the resort's Walt Disney Grand Theatre, the Chinese-language production of Disney's classic Broadway musical "Beauty and the Beast" would be extended past its 500th show on Jan. 5, 2020. With another 50 shows added to its run, visitors can continue enjoying one of the longest-running Broadway musicals in China throughout the New Year festivities.

Shanghai Disney Resort hosted a wide range of exciting events in 2019, from premieres of blockbusters such as "Avengers: Endgame," "The Lion King" and "Star Wars: The Rise of Skywalker," to beginning construction of its Zootopia-themed land, and holding Disney Inspiration Runs in spring and fall. However, the resort also encountered controversies overs its food and beverages entrance policies, and security screening process. The resort later responded to public concerns and improved its policies.

Ying Yong, mayor of Shanghai, met Bob Chapek, chairman of Disney Parks, Experiences and Products earlier on Thursday, praising the smooth operation of the resort since its opening in June 2016. "The total number of visitors to Shanghai Disneyland has exceeded 40 million, which proves that the cooperation between Shanghai and Disneyland has been successful," Ying said.

He added that the city government will continue to support Disney and Chinese partners to continuously improve the level of construction and management of the park, "We also hope to integrate more local culture, attract more visitors, provide a better park experience, and continue to make Shanghai Disneyland a model for Sino-US cooperation."

Chapek agreed and pledged Disney will work with Chinese partner companies to continue promoting the development and construction of the park, find a more suitable operation mode for local consumers, and provide visitors with better services. 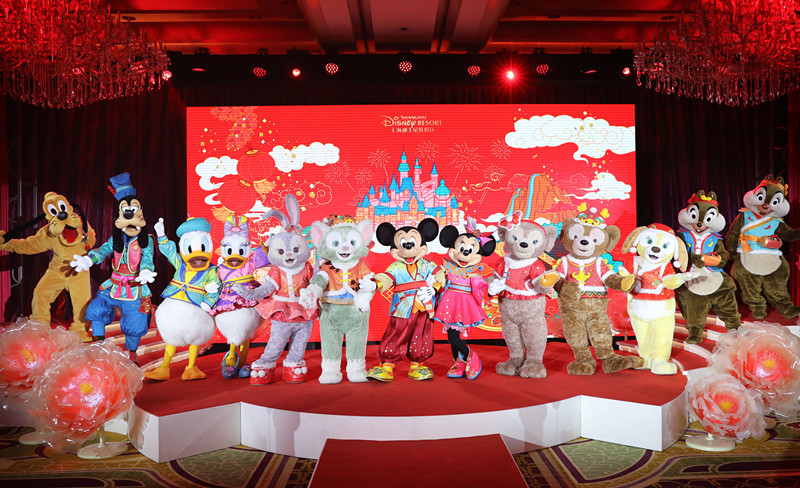 Mickey and Minnie Mouse joined their Disney friends on stage at a special Spring Festival event to introduce the resort's brand-new holiday festivities, including a sneak peek at their exclusive Spring Festival outfits, in Shanghai, Jan. 9, 2020.