In front of a giant wooden drum, Che Jie sprays wine and rice amid a group of mysterious dancers donning red, white and black clothes. He whispers some bizarre words and performs a special ritual as eerie, dramatic music featuring drums and gongs blasts out from behind a pillar covered by smiling oxheads. 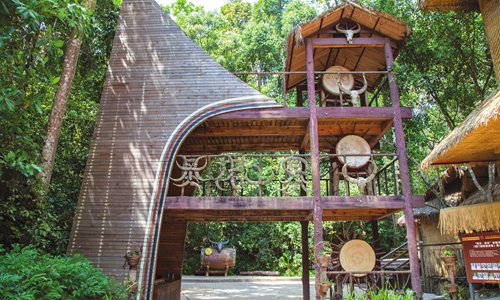 It's a performance by the Jinuo ethnic people in the Jinuo Village Tourist Attraction in the lush green mountainous township of Jinuo Mountain in southwest China's Yunnan Province. The township oversees 46 villages, including Jinuo Village.

Che, 63, has played the big drum his entire life. The difference is, in the past, he performed the drum ritual to pay tribute to ancestors or when someone died in the village. These days, he plays during performances for tourists.

"When I play the drum, I whisper all the best wishes to the tourists," said Che, a revered ethnic head in Jinuo Village. "I wish everyone a good year ahead, a safe journey home and longevity."

Local authorities are betting on the distinctive traditions of the Jinuo people to help power tourism, particularly the drum culture.

Last year, the tourist attraction drew 168,900 visitors. In the first five months of this year, the number of tourists has already exceeded 100,000, according to official figures.

The Jinuo people were a primitive tribe before 1949 when the People's Republic of China was founded. Jinuo means "the offspring of the uncle" in the local language, as folklore has it that the group's ancestors were a brother and a sister. Before 1949, the Jinuo people were basically living "slash and burn" lifestyles, and drum playing was the most important part of their cultural life.

According to local legends, the Jinuo people's creator, a goddess, made a boy and a girl and put them inside a big drum. The two floated on water for seven days, until they settled. They got married and gave birth to human beings.

"The Jinuo drum is the most mysterious and iconic thing among locals because it is believed to be connected to the goddess of the Jinuo people," Che said. "No one dares to make jokes in front of the drums, or say anything offensive."

The drums, usually made of wood and cowhide, must be suspended in the air instead of on the floor, as a way of showing respect to the goddess, Che said.

The Jinuo people were an "isolated" group in the past. They shunned strangers from outside their villages. People from different villages were not allowed to marry each other.

When teenage boys and girls come of age, Che also performs a ritual ceremony marking their growth, by spraying rice and wine. He leads the teenagers in singing local epics, which depict the hardships in labor and life, while also imparting moral lessons to them. After the ceremony, the teenagers' parents give them work tools and ethnic clothes worn by adults. Girls should wear a bun to show they have grown up.

In the township, images of the drums can be seen on almost every wall of the local buildings.

In 2008, the Jinuo drum dance was listed as a national-level intangible cultural heritage, significantly lifting its profile around the country.

In recent years, as the rural vitalization strategy gains steam, rural tourism is booming in China's countryside. The beautiful scenery and local delicacies, coupled with the mysterious drum culture, are luring a huge number of stressed-out urbanites. Improved infrastructure, like newly built roads, contributed to the tourism boom.

In the Jinuo Village Tourist Attraction area, the drum ritual is performed almost every day, with at least 30 dancers performing in synch. All of them are Jinuo people.

Che came to perform for the tourist attraction in 2016. He currently rakes in about 3,000 yuan (434 U.S. dollars) a month from the performances.

"I can make two yuan for each performance, in addition to my basic salary," he said.

When he is not performing, Che goes back home to grow tea and feeds pigs.

As more visitors come, many of the Jinuo people have jumped on the bandwagon of rural tourism, and have begun to provide unique Jinuo specialties to visitors in the Jinuo Village tourist attraction, where all villagers are eligible to do business.

"More than 300 people have visited my guesthouse in the past two months," she said. "The tourism business is pretty good here these days."

Che hopes that while the drum culture boosts local tourism business, the Jinuo drum dance will be appreciated more in society.

"The Jinuo drum dance faces a lack of inheritors, and I hope more people will join us in passing on the traditional culture," he said.