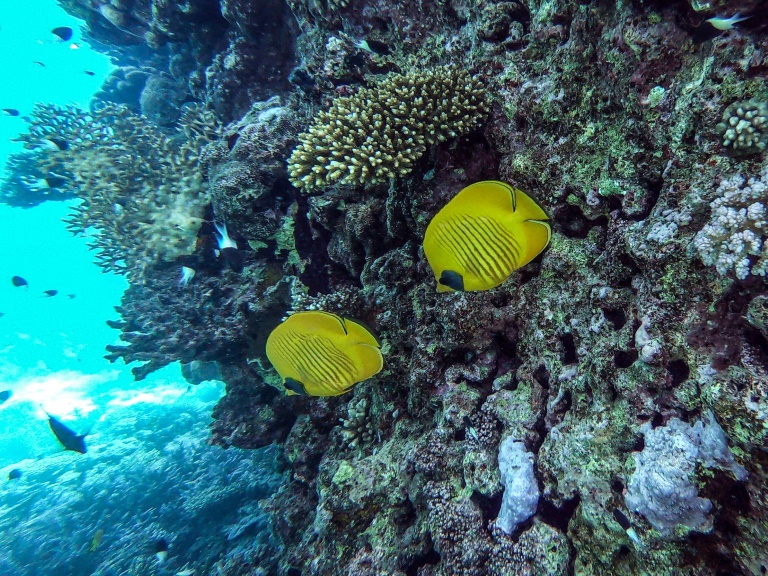 The Red Sea is a top scuba diving destination, but Egypt's tourism sector was buffeted by a wave of security shocks through much of this decade, before a partial recovery since 2017.

A diving instructor in the town of Hurghada, a top resort, warned that the rebound brought dangers for the corals.

Before the decline in visitors "there was way too much activity because it was so cheap" he said, asking to remain anonymous.

"In some areas, they've disappeared -- although in others we see they're coming back".

The United Nations Environment Programme (UNEP) says coral reefs are among "the most beautiful, biologically diverse and delicate ecosystems in the world".

It describes these resources as vital to maintaining food supply and protecting the shorelines of low-lying island nations.

Along the seafront in the town of Hurghada, bazaars and resorts offer unbeatable prices to attract budget-conscious European visitors to a country whose vital tourism sector was battered by a 2011 uprising and multiple jihadist attacks.

The sector took a further beating in 2015, when jihadists blew up a Russian plane that took off from another major Red Sea resort, Sharm al-Sheikh, killing 224 people.

But the contribution of Egypt's tourism sector to GDP rose 16.5 percent last year to $29.6 billion (26.5 billion euros), the highest level since 2010, according to the World Travel and Tourism Council.

Egypt has not published its own official statistics for the year.

German tourist Daniel, 29, said he was partly attracted to Egypt by the low prices.

"It's a lot cheaper than the Caribbean," he said as he tanned his pale skin on a private beach in Hurghada.

Flippers on their feet and air tanks on their backs, the mostly European tourists swim in tranquil waters just off Hurghada.

Ten metres below the surface, clown and butterfly fish swim among green and purple corals.

It's "very beautiful," said an Estonian tourist as she clambered back onto the boat, her blond wet hair protruding from her black wetsuit.

UNEP estimates that about 20 per cent of the world's coral reefs have been destroyed and a further 60 per cent are under threat -- from climate change, overfishing and tourism.

Many people who live close to reefs depend on them for a living, and Egypt's resort towns are no exception.

Scientists consider the Red Sea's reefs the most climate change-resilient corals but say they are still under threat.

"The revival of tourism in Egypt is a good thing, but it has increased pressure" on the reefs, said Heba Shawky, managing director of the Hurghada Environmental Protection and Conservation Association.

The campaign group was founded in 1992 by diving professionals who were worried about the potential impact of mass tourism in the region.

Around 1,700 tourist boats operate along Egypt's Red Sea coast, according to the Red Sea province, while the Suez Canal Authority says 18,174 commercial vessels passed through the Suez Canal last year.

Shawky said the NGO has set up around 1,200 buoys on various dive sites to prevent the use of anchors, which damage corals.

But, she added, much remains to be done -- such as reducing the number and size of dive boats, which can be up to 50 metres (55 yards) long.

"It's about limiting the number of users per day to tackle the problem of the growing number of boats," Shawky said.

"We are making every effort to preserve the marine environment and stop any pollution affecting the reefs," he told AFP.

Abdallah pointed to the absence of highly polluting industries such as steel, cement or ceramics production in the region.

He also noted the province's recent decision to ban single-use plastics, which are highly damaging to marine life.

With up to 12 million tonnes of plastic entering our oceans every year, the UNEP believes marine plastic pollution is one of the most pressing environmental challenges of our time.

"We are making a lot of effort, but we need to do more," said Mahmoud Hanafy, a professor in marine biology at Suez Canal University and an advisor to Shawky's association.

He urged authorities to declare some reefs protected sites to prevent them being "over-exploited".

He also suggested following the lead of Australia and the Maldives by creating artificial reefs, sometimes with 3D printing, to ease the pressure on natural corals.

Shawky contended that there is no contradiction between protecting the environment and supporting tourism.

Unlike other parts of Egypt, "we don't have pyramids or temples," she said.

"We have living resources under water. So by preserving the environment, we support the tourism industry."