An inaugural ceremony and press conference took place at the Norwegian Embassy in China on April 12, announcing direct flights from Beijing to Oslo that are set to begin on May 15. 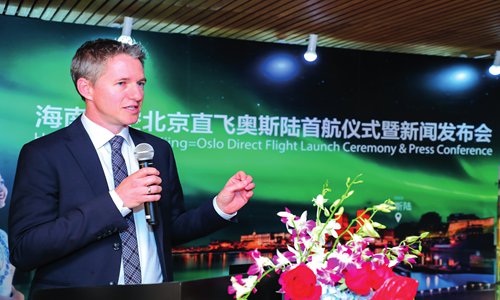 It is the first direct flight between China and Norway, according to the Norwegian Embassy. The new route is operated by Airbus 330, and there will be three round-trip flights every Monday, Wednesday and Friday.

Also at the event, Mattis Raustøl, charge d 'affaires of the Norwegian Embassy in Beijing, Pang Wei, deputy director of the Beijing Municipal Culture and Tourism Bureau, and Liu Yu, a representative from the Department of the European Affairs of the Foreign Ministry, and representatives of Hainan Airlines attended the event.

Raustøl welcomed  the establishment of the first direct flight between Norway and China in his opening speech and he believes that this will promote people-to-people and commercial ties between the two sides in the future.