As someone who was born and raised in the warm and rainy southern province of Guangdong, whenever the temperature in Beijing begins to fall below freezing, I start to feel a bit homesick for everything my hometown offers. Bubbling hot springs, steaming duck porridge and ancient towns bathed in sunlight are some of the best memories I have of home. If you'd like to share those memories and warm yourself up a little bit over the winter, Kaiping, a coastal county located in the southwestern part of the Pearl River Delta, has them all.The county is about two hours' drive from Guangzhou, the province's capital and where I grew up. Since it is so close to my hometown, I've been there on several vacations with my families and friends. Each time I very much enjoyed touring the tranquil old towns and villages and spending a few nights staying at local hot spring resorts. Since Kaiping stays between 15 to 25 C during the winter, I'm sure you will have a great time making use of local outdoor hot springs. The one I went to in Chishui town has some 60 unsheltered pools ranging from 40 to 70 C scattered at the foot of the mountains in the region. Some of these pools are said to have special medicinal properties that help people relax and is good for your skin when dried Chinese herbs and flowers are added to the hot water.Untouched by modernityAfter a refreshing hot spring bath, I recommend you set off for Chikan Old Town. It's best to get there sunset, since the ancient resort doesn't have much modern lighting, which makes it difficult to appreciate the scenery. The town is about 12 kilometers from the county's central district or a 10-minute drive from the hot spring resorts. Unlike many other famous historical towns that I have been to before, such as Lijiang in Yunan Province and Wuzhen in Zhejiang Province, the Qing Dynasty (1644-1911) town seated by the Tanjiang River seems to have escaped the influence of modernization and commercialization.From the paint-striped southern style qilou buildings to the Eastern-Western houses and the stone-paved streets where aged men and women ride vintage bicycles, the town is like something you see in a period film taking place during the 1920s to 1940s. This is one of the reasons why it was chosen as a film site for films such as Wong Kar-wai's The Grandmaster. The films were actually shot at a "movie town" located in the center of the town. Visitors have to pay around 20 yuan ($3) per ticket to walk around it.However, unless you are a hardcore fan of those films, I think you will have just as good a time wandering around the other parts of town for free. Walking along the river bank, you will find shops and snack stalls lined up and waiting for customers. Only a few of the stalls and shops actually have signs in front of them. Most shops' names are written on pillars and walls with red or black paint, an old practice seen in some parts of Guangzhou and Hong Kong.Though the restaurants and snack stalls might look small and dirty, I still recommend you try some of their southern-style delicacies. Duck porridge, bozaigao (a jelly-like sweet made of rice flour and red beans) and doufujiao (a kind of local fried tofu) are good choices. Moreover, sitting on a small bamboo stool by an oily wooden table while you wait for your food is a special experience you can't get anywhere else.Away from the crowded river bank, the town has somewhat of a mysterious atmosphere. I remembered once going to this part of town with my friend since we were curious about the traditional wuguan (martial arts training school) that is there. On one of the school's walls is a sign that reads dieda lingyao (Extremely Effective Medicine on Bruises and Wounds). Bottles and jars of liquid containing dead preserved snakes, ginseng and other types of Chinese herbal medicine sat on shelves by the wall. As we took a closer look at the jars, a muscular man dressed in martial arts training outfit appeared from nowhere and kept an eye on us without saying anything. Since this made us feel a bit creepy, we didn't buy anything and walked quickly out of the place. 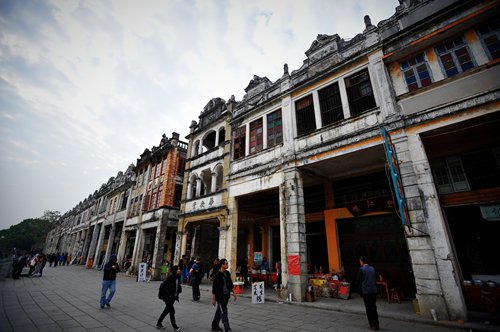 World heritage siteWhen you have had enough time walking around the old town and want to explore other attractions nearby, you can drive north or take a bus to the Zili village site, a 2007 UNESCO World Heritage Site famous for diaolou, a special local multi-storey watchtower originally built centuries ago to keep residents safe from floods and bandits. The site saw increased number of visitors since the release of the 2010 Chinese box-office hit Let the Bullets Fly, which well-known director Jiang Wen shot here. Standing amid the green rice paddies, the historical buildings demonstrate a solemn beauty with their square design and painted decorations. The buildings also feature an Eastern-Western style due to the county's history as the hometown to a large number of transpacific Chinese migrants during the 19th century. Admission to the Zili village site is around 70 yuan per person. There are also diaolou scattered in nearby villages but not as many as in Zili village.Rules of thumbGetting there: If you depart from Guangzhou, you can take a bus at the Guangdong Bus Terminal that will take you directly to the center district of Kaiping.Where to stay: There are few quality hotels at Chikan Old Town, so it's better to stay in the central district of Kaiping.