TRAVEL Enjoy the ancient villages and the sunrise on Yellow Mountain, Anhui Province

Enjoy the ancient villages and the sunrise on Yellow Mountain, Anhui Province 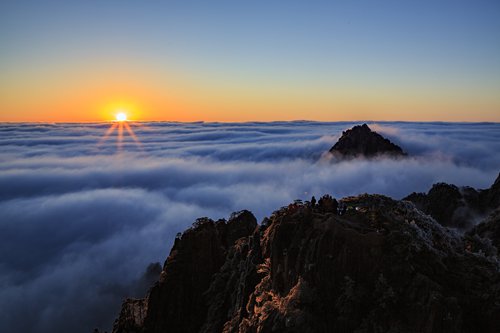 The sun comes over the horizon as seen from Yellow Mountain in Anhui Province. Photo: VCG

My Christmas backpacking trip to Huangshan, East China's Anhui Province - where the famous Yellow Mountain is located - was by far the best thing that I did last year.  Yellow Mountain - best known for its bizarrely-shaped rocks, amazing misty scenery and exceptionally beautiful sunrises and sunsets - had long been my dream destination. Even though this was my first time that I've been to the tourist attraction, I decided to give myself a bit more challenge - spend the night in a tent on top of the mountain so I could watch the sunrise the following morning.Since my hiking pal was still on his way when I arrived in Huangshan around Christmas, I had a day or so to squander. So I decided to go visit the ancient Xidi village nearby to get a peek at the centuries-old local culture. 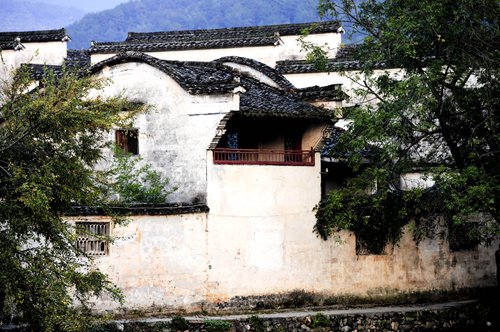 Literary atmosphereThe local Huizhou culture formed around a clan-based society that focused on fostering literati back in the old days so the city enjoys a long history of producing China's traditional Four Treasures of the Study: brushes, ink, paper and inkstones. The best places to learn about the culture are the ancient villages scattered at the foot of Yellow Mountain. Among them, Hongcun and Xidi - both of which were listed together as a UNESCO World Heritage site in 2000 - are the most famous.Since I only had time to visit one, I chose to head to Xidi because it has a longer history and was known as the cradle of government officials in ancient times.The village was about an hour's drive from the city center. I rented a car there and drove all the way to the village. Probably because it was off-peak season, there were only a few visitors in the village and the parking lot was kind of empty. But I liked the serene atmosphere very much.A 400-year-old stone-made paifang, a Chinese style memorial archway, stood at the entry of the village like a guard. It is said to be the only such building in the village that survived the Cultural Revolution (1966-76). Painted revolutionary slogans can still be seen on the building.Walking through the paifang, I officially entered Xidi, home to some 300 families. Several residences that were formerly the homes of famous local officials and rich families are open to visitors.Meandering the narrow alleys and finally entering one of the residences, I immediately noticed how the architecture differed from that of more northern cities - it had higher walls, more roof decorations and was equipped with sophisticated ventilation and cooling system - a tunnel under the house's floor links the rooms with a well outside, for instance, helps make the room cooler on hot summer days.If you visit, I recommend you spend some time examining the beautiful window and roof decorations carved from stone - also a significant part of Huizhou culture. Many depict ancient folk stories or just animals and plants such as lions, flowers and birds. Lion decorations often appear on the residences of ancient officials. It is said that the more lion-shaped decorations there are, the higher the rank the residence's owner was. Some of them were carved by hand from a single large stone, making them rare masterpieces that required a lot of skill to make.Wandering through the village, I met a local ink brush store owner who blamed declining sales on people's lack of interest in traditional Chinese calligraphy."Even my own children are not interested in learning traditional Chinese calligraphy," said the owner. "I earn very little and might have to quit the industry one day." 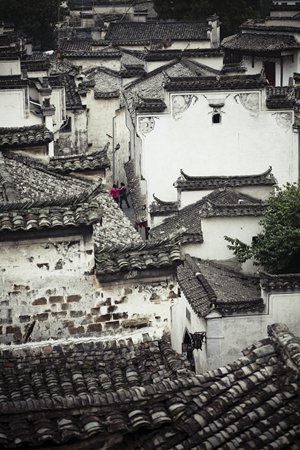 Getting to the topAfter my tour of the village, I drove back to the urban area to meet my hiking pal Xiao Cheng. The weather was not very good that morning when we started climbing Yellow Mountain, each loaded with some 12 kilograms of camping gear. Our plan was to climb to the top of the mountain before sunset. There was no sun and we didn't see the "seas of clouds" - one of the mountain's Four Wonders (pine trees, strangely shaped stones, floating seas of mist and the sunrise) - as we climbed up the stairs leading up the mountain. But I was still amazed by the beautiful mountains stretching before my eyes like a scroll of ink painting. Though we failed to see the "sea of clouds" on our way to the top, we didn't miss out on the other three "Wonders." I couldn't get enough of the views of the stones on the mountain. There was actually one that looked exactly like a brick phone.Passers-by kept "whoaing" in amazement at all out gear, probably because they seldom see tourists carrying that much stuff. But we soon met some new companions - tiaofu (porters), carriers of food and laundry for the hotels located on top of the mountain. Many of them were thin men but they managed to carry on their shoulders packages weighing well over 30 kilograms. It looked like it took quite a lot of effort. After seven hours' of climbing, Xiao and I finally reached Guang Ming Ding - one of the highest spots on Yellow Mountain and also one of the best spots to watch the sunrise and "sea of clouds" - at three in the afternoon. We rested for a while and started putting up our tents. Aside from us, there was also a man camping at the same area who was planning to get up at four in the morning next day to photograph the stars. The very next day, Xiao and I got up at five for the sunrise. It was freezing cold and my hands and legs became numb as we waited patiently for the moment.The sky gradually became pink as the sun was about to rise. Soon the new-born sun began to appear on the horizon, radiating gentle orange light. The moment we had waited so long for had finally arrived. Watching the sun jumping out from the clouds and mountains right in front of me, I was so moved that I couldn't stop clicking my camera to get the best picture of it.  When the sun finally broke free of the horizon, we started to pack up our things and went down the mountain by cable car, which also provided some really great views. For anybody who wants to go to Yellow Mountain I really recommend camping. It's actually not as cold as you might imagine  on top of the mountain, even in winter. The trip is highly likely to become one of your best memories, just like it did for me.Rules of thumb:What to wear: Temperatures in mountainous areas can be very low at night, so make sure you bring along warm clothing. If you want to camp out on the mountain, I suggest you buy a down sleeping bag to ward off the cold.What to eat: There are restaurants on the mountains, but they are very expensive. I recommend bringing your own food, like instant noodles.