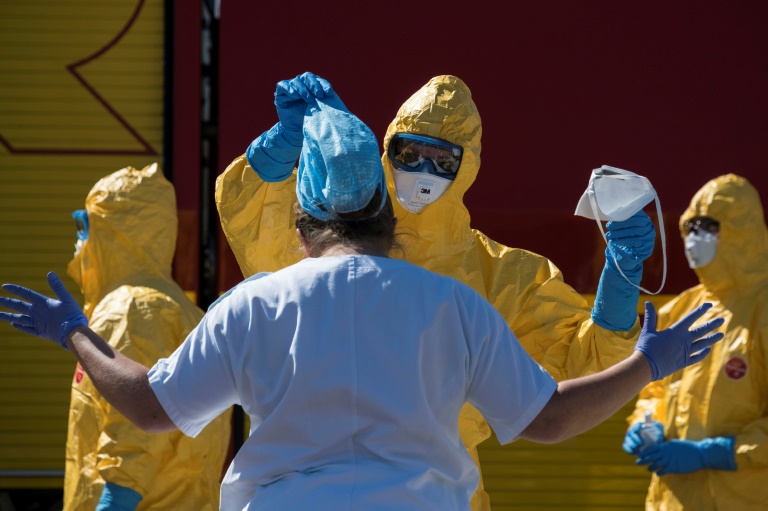 Firemen remove protective gear from medical staff after they load a COVID-19 patient onto a French Air Force plane at the Bale-Mulhouse airport. (Photo: AFP)

BRUSSELS, April 8 (Xinhua) -- While some European countries are planning to loosen their restriction rules in the battle against the coronavirus pandemic, the European Union (EU) on Wednesday proposed prolonging travel restriction at its external borders.

The European Commission said in a statement that it invited Schengen Member States and Schengen Associated States to prolong the temporary restriction on non-essential travel to the EU until May 15.

The ongoing temporary 30-day restriction was introduced in mid-March when the bloc convened a video summit of the heads of the state on March 17, four days after the World Health Organization identified Europe as the epicenter of the pandemic.

Since then, Europe has witnessed a rapid increase in infections. Many of the EU member states have declared state of emergency and issued orders for social distancing, which have helped flatten the curve in some hard hit countries like Italy and Spain.

The experience of the countries exposed to the pandemic "shows the measures applied to fight the spread of the virus require more than 30 days to be effective," the statement noted.

"While we can see encouraging first results, prolonging the travel restriction is necessary to continue reducing the risks of the disease spreading further. We should not yet let the door open whilst we are securing our house," said Margaritis Schinas, European Commission Vice-President for Promoting European Way of Life.