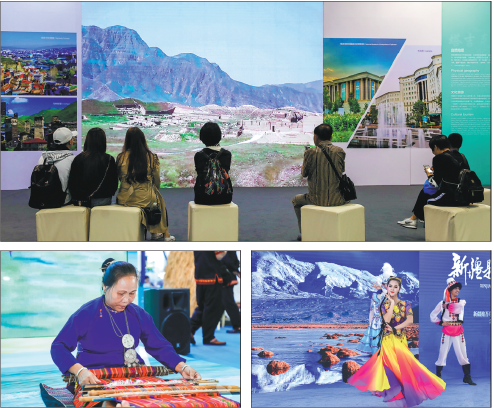 Clockwise from top: Audiences watch a video at a world-heritage display during the Asian Culture and Tourism Exhibition; dancers perform at a Xinjiang tourism-promotion event; a woman demonstrates traditional weaving skills at the Hainan pavilion. (Photo provided to China Daily)

Exotic art performances, a world-heritage photography exhibition and gourmet food opened visitors' eyes to what Asia has to offer at the recent Asian Culture and Tourism Exhibition.

Hosted by the Ministry of Culture and Tourism, the three-day event kicked off in Beijing on May 16 and showed the latest tourism developments in China and other Asian countries.

"Asia is a cradle of the human civilization," says Luo Shugang, minister of culture and tourism.

The region takes up one-third of the total land on Earth, has two-thirds of the global population, and consists of 47 countries and more than 1,000 ethnic groups.

The exhibition presented diverse cultures and the splendid natural landscapes of Asian countries before an audience drawn from far and wide, Luo adds.

The goal is to enable visitors to better understand Asian civilization and boost international tourism cooperation.

At the Nepal pavilion, new destinations that are scheduled to open in 2020 were unveiled.

"We're here to show travelers what they can do in Nepal in 2020," says Ramu Gyawali, an employee at the pavilion.

Traditional scarfs, scented paper and a photography exhibition were displayed and attracted flocks of inquisitive visitors.

"All of our travel-product brochures were snatched up in the morning," says Sonam Ghale, an employee from a Nepalese travel agency, at the Nepal pavilion.

Ghale was glad that so many people are interested in Nepal.

At the moment, her agency has launched products featuring hiking, wilderness adventures and leisure to meet the needs of the increasing number of Chinese travelers.

Chinese holidaymakers paid more than 150,000 visits to Nepal in 2018, up 46.8 percent compared with the previous year, Nepal's tourism authority reports.

"We're confident that more will come in the future," Ghale says.

The Laos and Cambodia pavilions also attracted lots of attention with their art performances.

Both countries were guests of honor at the exhibition and brought some of their distinctive tourism resources with them.

"We introduced a few essential cultural aspects and folk customs from Laos at the exhibition, as well as well-known tourist attractions," says Sounh Manivong, director general of the tourism-marketing department with the Laos' Information, Culture and Tourism Ministry.

Local tea, coffee and handicrafts enabled visitors to better understand the charms that Laos has to offer.

"We hope more Chinese will get to know our traditional culture and discover our tourism projects as a result of the exhibition," Manivong says.

This year has been designated as the China-Laos tourism year and Laos will stage traditional events on a monthly basis, such as New Year celebrations, to ensure a great stay for Chinese travelers.

"Over the past few years, China has consistently been Cambodia's biggest investor and development partner," says Thong Khon, Cambodia's tourism minister, at the exhibition.

A total of 2.02 million Chinese travelers made trips to Cambodia in 2018, up by 67 percent year-on-year.

The country is expected to see the number of Chinese visits reach 3 million by 2020 and 8 million by 2030, Khon says.

Chinese people made more than 160 million outbound trips last year, while inbound trips by overseas tourists broke 140 million, according to the Chinese Ministry of Culture and Tourism.

By 2020, tourism in Asia is expected to make up 28 percent of the global tourism-market share, according to Luo.

Tourism between China and other Asian countries has long been a major source of cooperation.

The number of inbound tourists to China from such Asian countries as Japan, South Korea, Vietnam and Thailand has continued to rise over the years, says Zhang Xilong, a senior official from the Ministry of Culture and Tourism.

"The number of Chinese tourists to those countries has been rapidly increasing, too," Zhang says.

China has also improved its tourism infrastructure and policies to make things easier for all travelers and to better satisfy their needs.

"China has made great headway in airport, rail and port development," Zhang says.

Favorable exit-entry tourism policies, such as visa-free transit, have also helped to boost people-to-people exchanges with other Asian countries.

Zhang believes more culture and tourism exchanges will take place as the Belt and Road Initiative continues to advance with growing support from more countries and regions.