Although Harbin, the capital city of Northeast China's Heilongjiang Province, is almost at the same latitude as Paris and Seattle, it is freezing in winter. Even with the influence of global warming, minus 20 C temperatures are still commonplace. 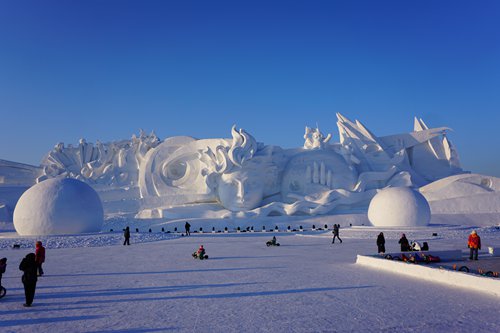 While such low temperatures may sound unwelcoming, the people of Harbin have made full use of the cold climate and local natural resources to turn their home into a famous vacation spot. At the core of the city's winter tourism is the Harbin International Ice and Snow Festival (HIISF), which has attracted much attention since it was officially launched in 1985. It is now one of the top four ice and snow festivals around the globe.

Held annually from January 5 to February 5, the festival is spread throughout the city with numerous ice sculptures to be found around every corner. However, if you are visiting for only a short while here are three spots you shouldn't miss.

World of ice and snow

According to the official documents provided by the marketing department of Harbin Ice-Snow World, the theme of this year is "Dreaming in the Land of Ice and Snow." More than 100 ice/snow sculptures are located within this 600,000-square-meter park.

There are more than 30 recreational sites for kids and adults. You can go skiing and skating, ride bikes across the ice and even slip your way down the longest ice slide in the world.

While these activities are fun, it is the beauty of the ice sculptures that attracts most people.

This year, the park has recreated 20 classic ice sculptures to celebrate its 20th anniversary. Ranging from 8 meters to 45 meters in height, most of these ice sculptures are impressive in size and also extremely detailed.

The 1999 Century Light Tower, the tallest and most important sculpture in the park, was built using 20 layers of stacked ice blocks, representing the spirit of overcoming difficulties. Well-placed lights make the ice tower have various and changeable colors which make visitors feel like they have become lost in a dream.

"It is very impressive, all these sculptures, colors and lights. It's very beautiful," a tourist from Germany told the Global Times.

One elderly couple from Australia told the Global Times they came to Harbin with 21 other Australians just to see the sculptures and to experience a place that is far different from their homeland, which is currently experiencing summer.

"[I am] very impressed with this architecture and those presentations. It's excellent. You wouldn't see anything like this unless you come to Harbin," said the husband. 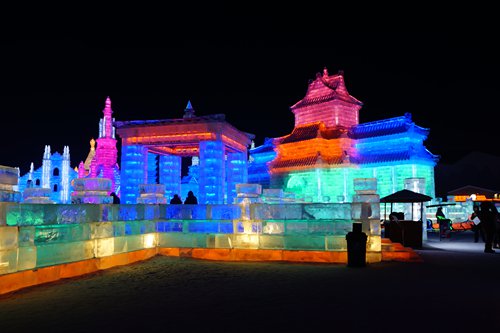 An ice palace sculpture at Harbin Ice-Snow World in Harbin

Much less crowed than Ice-Snow World, the Snow Sculpture Expo on Sun Island Park focuses on displaying snow sculptures. With the Spring Festival right around the corner, tourists can find sculptures depicting scenes from traditional Chinese myths and stories. Ice sculptures carved by both professionals and talented enthusiasts are also on display.

According to Xu Ling, an employee at the Snow Sculpture Expo, the most significant sculpture is Journey to Galaxy, which depicts images from the imagination of a girl yearning to understand the mysteries of the universe. Located on the frozen surface of Sun Lake, the sculpture was carved by more than 100 sculptors over a period of about two weeks. This giant artwork is roughly 106 meters long, 32 meters high and 20 meters wide.

"I came here for the festival. I've seen the pictures of it in my country," Australian tourist Jared told the Global Times.

"When I first got here, I was impressed by how intricate and how big those sculptures are."

Meanwhile, tourists are also able to enjoy free recreational games such as the ice biking, snow-hill sliding and snowmobiling.

"Riding bikes on the ice, that was a lot of fun…in Australia that probably costs extra. And I really liked sliding down the snow hill," Jared said.

This is the smallest site but also the oldest among the three. In 1963, in order to enrich citizens' recreational life during the cold winters, the Harbin government held the first Ice Lantern Fair at Zhaolin Park. This is believed to be the origin of today's Harbin Ice and Snow Festival.

Different from the previously mentioned sites, Zhaolin Park is on the southern bank of the Songhua River, about 500 meters to Central Street, which makes it very easy to reach. The park is named after Chinese patriotic general Li Zhaolin, who made great contributions during World War II.

There is no need to buy a ticket to visit the Ice Lantern Fair, which consists of more than 1,000 ice sculptures displayed around the park. While there are two rather large sculptures, most are relatively small.

Most of these sculptures were made by local middle and high school students, university students and the professionals.

Wayne, an Australian who lives in Shanghai, said that he liked Zhaolin Park because "it is quiet," which allowed him to explore at his leisure.

"It's famous in Australia. You can see the advertisements in newspapers and on the TV. It is already a well-known festival around the world."