TRAVEL Fanjing Mountain: A beauty in all its primitive glory

Fanjing Mountain: A beauty in all its primitive glory 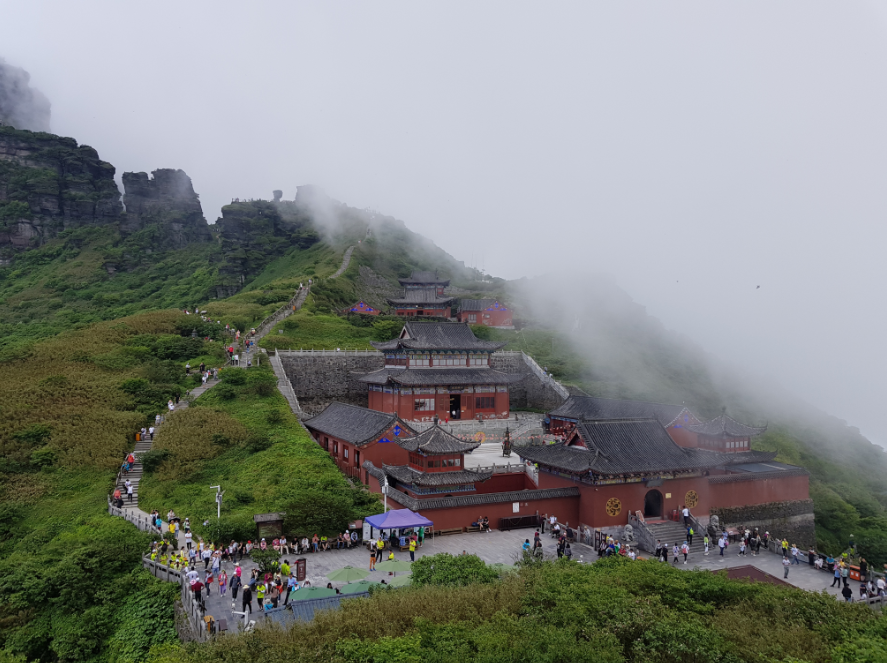 Fanjing Mountain is one of the five sacred Buddhist Mountains of China. (Photo: CGTN)

"Once you come out of the forest, and you see these unique rock formations – that's pretty amazing. You've seen it before in pictures but once you see it in real life, it's even more amazing," said a German visitor.

He was referring to Fanjing Mountain in southwest China's Guizhou Province.

Having hiked mountains in Sichuan and Yunnan provinces with his girlfriend, he said, Fanjing Mountain is quite like nothing he has seen before. And this sentiment is seemingly shared by other foreign and local tourists I spoke to at the mountain.

These unique rock formations could be said to form the very basis of Fanjing Mountain. According to Zhou Wenqing, deputy director of Fanjingshan Inscription Office for World Heritage Honor, these rocks “rose from the seabed when the earth heaved up during the sea-building process, and has a history of a billion years.”

Dozens of species live on its famous huge stone known as “Wanbaoyan," including plants, mosses, lichens and fungi.

Fanjing Mountain, China's latest addition to the UNESCO World Natural Heritage List, is a breathtaking beauty in all its primitive glory.

The mountain is so primitive that it is the only place where you can find the Guizhou Golden Monkey. (Unfortunately, I did not manage to spot any – these monkeys apparently hide from humans.)

“It's only found here and lives here. At about 750 to 800 of them, it makes these golden monkeys even more precious than giant pandas,” Zhou said, adding, this has attracted many experts to this mysterious mountain for scientific investigation.

Fanjing Mountain has an abundance of fagus or beech forest, which is home to the Golden Monkey.

Altogether, the mountain has over 5,000 types of plants and animals, with residents living in the surrounding area, Zhou said. The mountain peaks at above 2,500 meters above sea level.

“At the same latitude, other places on earth could become deserts. But Fanjing Mountain still has a lush green vegetation, because animals live here. Snakes eat mice, squirrels,” Zhou explained.

“And these small animals consume plants, while plants require the excrement of small animals to nourish them. So a complete ecological chain is formed here between animals and plants.”

Fanjing Mountain was added to UNESCO's World Heritage List in July 2018 and has since seen changes.

“There has been some green transfer of development, such as the beekeeping industry, which was not paid much attention to in the past. Now, production of honey is flourishing – its value is high,” Zhou said.

Zhou added that villagers depend on the mountain for their livelihoods.

“Beekeeping, bamboo shoots and tea cultivation depend on this mountain. So locals are determined to protect it.”

“Through aboriginal relocation, we have protected the interior of the mountain. We have also increased measures to prevent forest fires, through various controls and education,” Wu said.

Fanjing Mountain is one of the five sacred Buddhist Mountains of China. /CGTN Photo

Wu added that there has never been a forest fire at Fanjing Mountain, of which 95 percent is covered by forest.

“Overall, the locals' living standards have improved due to the opening of farmhouses, forest tourism, and reduced forest destruction,” Wu said.

Whether it's to soak in this raw marvel, let out a good sweat hiking, or to take Instagram-worthy pictures, Fanjing Mountain is a million times over worth the trip.

And I must say: it lived up to its entry (China's only tourist destination, in fact) to the National Geographic's “Best Trips in 2019.”