TRAVEL Festival to include more tourism

Festival to include more tourism

Annual migration of Chinese people won't only be to their hometowns

Chinese tourists are expected to make 450 million domestic trips during the upcoming Spring Festival holiday, according to a report released by Trip.com, the country's major online travel agency, on Tuesday. 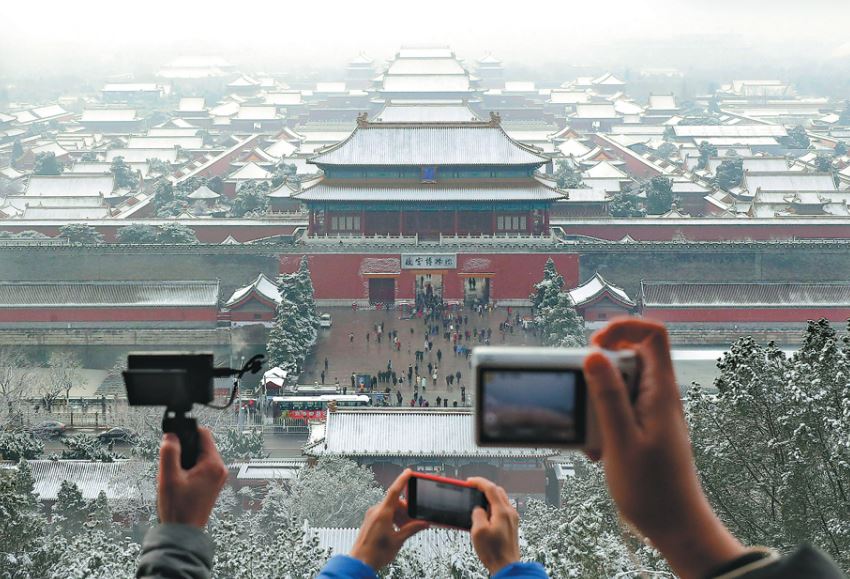 The Palace Museum in Beijing is blanketed in snow in December. The city is forecast to stand among top tourist destinations during the upcoming Spring Festival holiday. (Photo: Xinhua)

Spring Festival is a traditional occasion for a family get-together, when grown-up children working in other regions elbow their way for a train or air ticket, or drive all the way back to their hometown. But the new trend of spending the festival traveling for tourism purposes reflects consumption upgrades, industry insiders said.

A total of 415 million trips were made across China during the Spring Festival holiday in 2019, up 7.6 percent from a year earlier. The trips brought an increase of 8.2 percent year-on-year in tourism revenue to 513.9 billion yuan ($73.76 billion).

About 4.6 billion domestic trips were made in the first three quarters of last year, up 8.8 percent year-on-year.

Of tourists that placed their orders on tourism platform Trip, 54 percent will travel with their children for the festival, and 7 percent of them will opt to tour alone. More than 30 percent of tourists will set off their journey before Lunar New Year's Eve.

Warm southern cities and northern snow and ice destinations are the most popular choices among both group visitors and independent travelers.

Of the top 10 destinations to group tourists, Beijing ranks No 1, followed by a string of southern cities such as Kunming, Guangzhou and Lijiang, a city in Yunnan province known for ethnic culture.

After a scheduled high-speed rail service linking Beijing and Zhangjiakou, co-hosts of the 2022 Winter Olympic Games, began on Monday, tourism routes including the two cities have proved popular on the platform.

Harbin, capital of Northeast China's Heilongjiang province, ranks sixth on the list as one of the only three from the region to the north of the Yangtze River. The other two are Beijing and Xi'an.

As a traditional ice and snow sports destination, Harbin is also famous for its display of ice sculptures, thus gaining popularity especially among tourists from southern China.

Sanya, a city in tropical island Hainan province, takes first position on the list of destinations to individual travelers, as it provides an escape from the seasonal chill.

According to the report, Shanghai, Beijing and Guangzhou are the top three sources of tourists during the Spring Festival holiday. Residents from Nanjing, Hangzhou, Shenzhen, Chengdu and Wuhan also like to celebrate the festival on journeys, rather than at home.

As more Chinese travel during holidays, the world will also benefit, Peng said. So far, Chinese tourists have booked outbound trips to more than 1,000 destinations in 102 countries and regions on Trip.com.