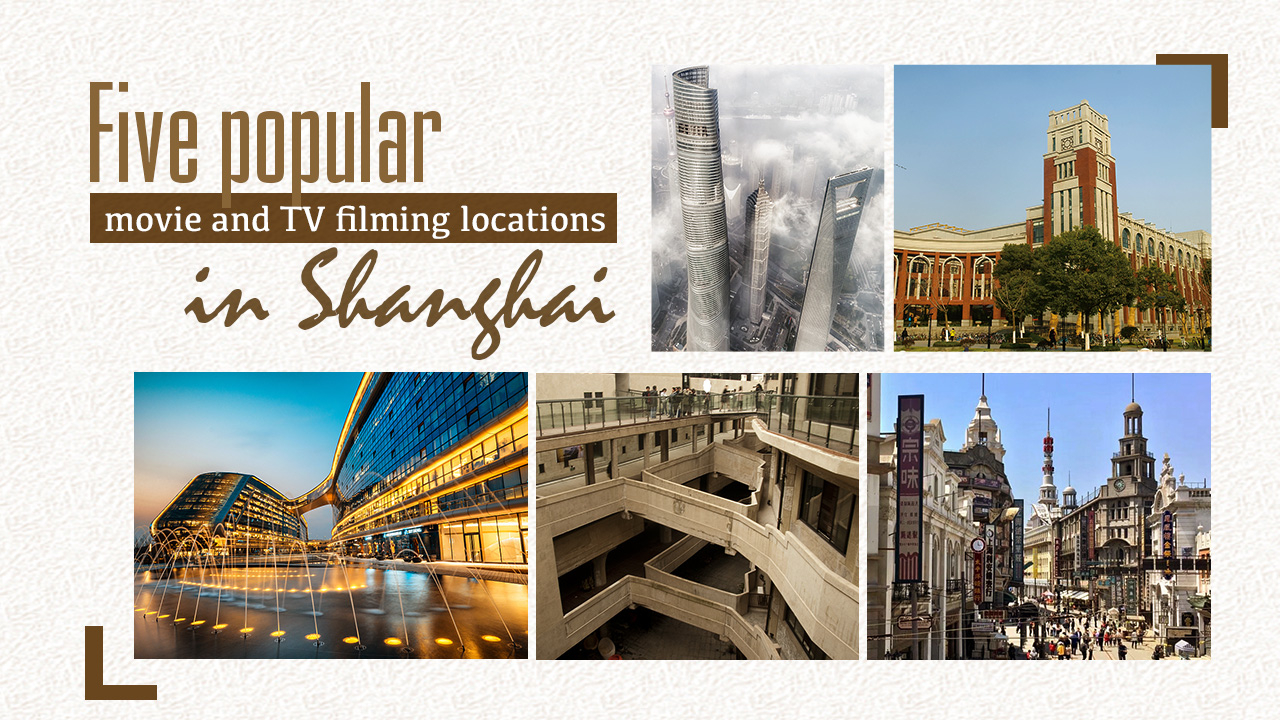 Shanghai, known as the Pearl of the Orient, is China's financial hub and known as a city that never sleeps. From the elegant scenery and Art Deco villas of the former French Concession, to the modern skyscrapers of Lujiazui and the colonial buildings that line the Bund - almost every spot in Shanghai is worth of capturing and could make a photographer out of anyone. As the 22nd Shanghai International Film Festival (SIFF) draws near, CGTN has selected five popular movie and TV filming locations in Shanghai to offer you a glimpse of this city's captivating charms.

Shanghai Tower: One of the city's major landmarks

Situated in the Lujiazui Finance and Trade Zone of Pudong Area in Shanghai, near Jin Mao Tower, the Shanghai Tower has long been considered as one of the famous landmarks of Shanghai.

It's worth mentioning that this year, China's first space-based sci-fi blockbuster "The Wandering Earth" has stood out from the Spring Festival's films, gaining the great reputation among the public as well as making Shanghai Tower one of the most popular destinations for moviegoers.

Transportation: Visitors could take subway line 2 and get off at Lujiazui Station, and head out from Exit 6.

Next to Hongqiao Airport in Shanghai is the Sky SOHO, the third masterpiece in a trilogy of SOHO China developments designed by world-renowned architect Zaha Hadid, following the Galaxy SOHO and Wangjing SOHO in Beijing.

The Sky SOHO consists of 12 stand-alone buildings interlinked by 16 sky bridges to create a dynamic yet streamlined space where many popular movies or TV series have chosen for filming locations such as the popular movie "My Sunshine". It's no wonder that filmmakers have a special preference here.

Home to the headquarters of more than 800 companies, the Sky SOHO boasts its fantastic design of buildings and advantageous locations, and it's considered as one of the new iconic landmarks in Shanghai.

Transportation: Visitors could take subway line 2 from East Nanjing Road Station to Songhong Road Station, and then walk to the Sky SOHO.

1933 Old Millfun: A place to see Shanghai's old and new

Lying in Hongkou District and originally serving as a slaughterhouse, the 1933 Old Millfun was built by a famous British designer Balfours in 1933. At that time, it was noted as one of three largest slaughterhouses in the world.

With eastern and western styles combined, now it has been transformed into a creative hub of art, culture, entertainment and fashion.

Today, many movies and TV series such as "Tiny Times" and "101st Marriage Proposal" have chosen this site as the filming locations.

Transportation: Visitors could take bus line 854 and get off at Zhoujiazhi Road Station, and then walk around 5 minutes to the destination.

Founded in 1952, East China University of Political Science and Law (ECUPL) is one of the first group of higher learning institutions of politics and law established by the People's Republic of China. With verdant trees, modern and classical styles of buildings around, wandering in this university would be a fabulous opportunity to embrace yourselves into the atmosphere of art and culture.

In recent years, popular movies or TV series like "Love O2O", "Women who know how to flirt are the luckiest" and "Love in Disguise" have been filmed in the university, making it a newly-developed film-shooting destination in Shanghai.

Strolling on the 1920s Nanjing Road Walking Street in Shanghai, you soon feel as if you are wandering through an older, quieter version of Shanghai. With tonnes of movie sets and activities reminiscent of their golden age of film, Shanghai Film Park is an ode to classic Chinese cinema and a must-see destination for movie lovers or fan of classic films.

The downtown Shanghai part and Art Deco buildings, as well as the small lake and Peace plaza are highlights in the park. If lucky, you might get a peek at your favorite movie stars at work here.