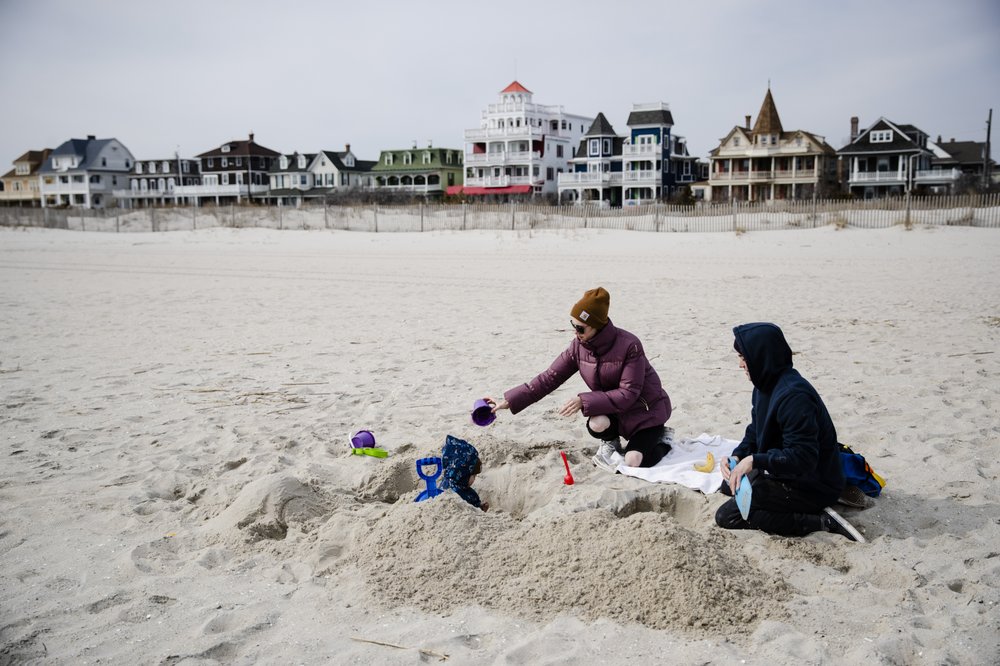 Some city folk have been fleeing to their second homes in resort areas to ride out the coronavirus outbreak near the beach or the ski slopes. But neighbors in many of those places are yanking the welcome mat — fearing infection and the overwhelming of already stretched resources in sleepy shore and mountain communities.

In southern New Jersey, Cape May County Freeholder Director Gerald Thornton asked summer home owners, who make up nearly half the property owners, to stay away for at least two weeks.

“Because the children are out of school, people are taking that as an opportunity to go to the shore,” he said Wednesday. “Instead of a national emergency, they’re taking it like an additional vacation.”

While, the coronavirus causes only mild or moderate symptoms, such as fever and cough, for most people, it can cause more severe illness, including pneumonia, for some, especially older adults and people with existing health problems. The vast majority of people recover from the new virus in a period of weeks.

COPING WITH THE OUTBREAK:

“We don’t know where these people are coming from or who they’ve been exposed to,” he said. “We got reports today that someone from New York who was exposed to the virus came down here, and now we’re investigating whether he’s positive.”

An hour later, county officials announced that the man, a 30-year-old New Yorker, had indeed tested positive, and was the first confirmed case of the virus in Cape May County. That led the county’s director of nursing to issue another request for visitors to stay away.

Similar debates are raging in many shore and mountain towns.

One Maine island that is reachable only by boat or plane barred part-time residents from the island — before backtracking and simply “strongly” encouraging them to stay away, for their health and the health of North Haven’s full-time residents.

In Ocean City, New Jersey, which has a large percentage of summer residents, and draws vacationers from Philadelphia and New York, Melissa Wahl, a resident, said there was not a single piece of meat available at a local supermarket Wednesday morning.

“The cashier who checked me out said she had been seeing a lot of out of towners,” she said. “People are afraid of them bringing in this virus and our hospital not having the ability to handle all of the influx.”

During the outbreak, business has more than doubled at the Winhall Market near Stratton Mountain Ski Resort in southern Vermont, as residents of New York and Boston pour in. Locals aren’t thrilled as they watch items selling out at the small market and fear that out-of-staters could be bringing the virus with them.

The phenomenon is not unique to America; in the weeks before China instituted a travel ban, 2% of the residents of Wuhan, the epicenter of the virus, fled to Guangdong province, the coastal manufacturing powerhouse across from Hong Kong.

Valencia, Spain, has closed its beaches to prevent people fleeing the virus from coming there, and leading to a reverse migration away from the shore.

In the U.S., Point Pleasant Beach, which has one of New Jersey’s most popular boardwalks, is trying a similar tactic, urging people not to walk on it for the foreseeable future.

“While fresh air and spending time outside is positive, the narrow boardwalk will force people to be in close proximity to each other, thus negating all attempts to adhere to social distancing,” police chief Joseph Michigan said in a Facebook posting.

Some were fleeing not to a second home but to someone else’s home.

Josh Rodriguez, from Tempe, Arizona, had planed for months to attend a jiu jitsu tournament in Big Bear Lake, California. When it got canceled due to concerns about the virus, he and his wife went to California anyway.

“We decided to get out of the craziness of the city and lock ourselves in a cabin,” Rodriguez said. “It’s just us and a fire watching the snowfall.”

Cailin Sandvig and her husband Justin Bracken left their apartment in the Crown Heights section of Brooklyn on Monday, packing their 10-month-old twins, Milo and Aurelia, into the family car along with baby supplies and a week’s worth of clothing for themselves. They were heading to Wheaton, Illinois, where Sandvig’s mother lives by herself in a four-bedroom house.

Practicing social distancing in Brooklyn would mean keeping the twins inside their small apartment, and that would be untenable since they’re crawling and almost walking.

“To keep them in a room where they have at most 10 feet of distance is a nightmare,” she said.

Candice Cobb owns a home on Ocracoke Island, a strip of land on North Carolina’s Outer Banks. But she won’t be making the trip from her residence in Hillsborough, North Carolina.

“I would have the potential of contaminating the island as would anybody else who is not a full-time resident,” said Cobb, who retired from a public television station a few years ago. “I want to protect my friends and family on the island just as much as I want to protect the people in Hillsborough. I’m not going now. I think that defeats the purpose of having the emergency declaration in the first place.”