TRAVEL Flight from Kunming to Hangzhou returns after mid-air scare

Flight from Kunming to Hangzhou returns after mid-air scare 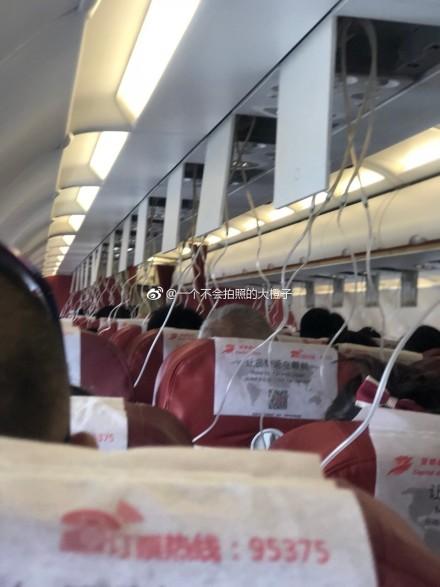 The oxygen masks were deployed when the plane began sharp descend mid-air. (Photo from Sina Weibo)

A plane flying from Kuming to Hangzhou was forced to turn back 20 minutes after take-off due to a problem with cabin pressure.

The flight JD5158 of the Capital Airline carrying 145 passengers and 9 crew members landed safely at Changshui International Airport in Kunming, Yunnan province on Sunday afternoon, according to The Paper.

"I felt strong weightlessness when the plane suddenly began to descend," said a passenger surnamed Zhang. Zhang and his wife with their 6-year-old son were returning after a travel in Hangzhou.

Recalling the terrifying moment, Zhang said oxygen masks fell down from above and his son kept asking why the plane was falling down. To protect him from the truth, Zhang said to his son that "it was a just game".

Some passengers even recorded their last words with their smartphones thinking they were not going to make it. The stewardess told the passengers to stay calm.

After 20 minutes of struggle, the plane finally stabilized, and the crew members announced that the flight was returning to Changshui International Airport.

When the plane landed safely at the airport, the passengers warmly applauded the captain and crew members.

According to Capital Airline, a preliminary investigation showed the flight had mechanical problem and appeared to lose altitude. The engineers are assessing the plane.

A statement from Capital Airline apologized for "any inconvenience caused" and promised to accommodate passengers on other flights. Those not wishing to travel by plane will be offered full refund in addition to 400 yuan compensation, said the airline.