Foreign visitors marvel at conservation of nature, cultural relics after building of dam

Nine years after the completion of the gigantic Three Gorges Dam on the Yangtze River, how does the area look today?

More than 200 tourists from both China and abroad recently embarked on a boat tour to the area, to compare the Three Gorges now with what they saw before the building of the project.

The Three Gorges are three adjacent gorges in the upper reaches of the Yangtze River, the longest river in China. The 193-kilometer Three Gorges area starts from a tourism center called Baidi in Fengjie county of Southwest China's Chongqing Municipality, and stretches to Yichang of Hubei Province, Central China. 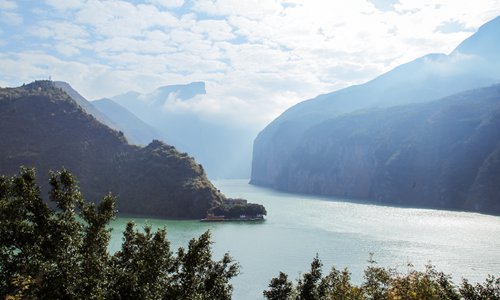 The Three Gorges is known to the world not only for its beautiful natural scenery and historical sites, but also because this area was once in the center of a furious international debate caused by the construction of the Three Gorges Dam project.

Some believed the reservoir formed after the completion of the dam would submerge archeological sites together with natural scenery, and cause the extinction of some species along the Yangtze River.

The Chongqing Municipal Commission of Culture and Tourism Development invited over 200 tourists from home and abroad who had visited the site before the construction of the dam to visit again. 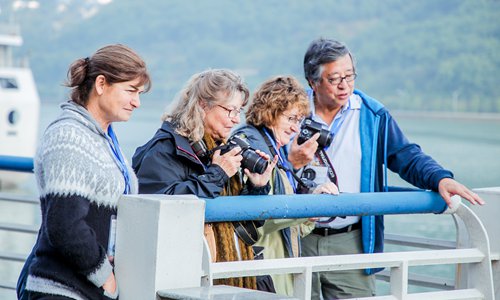 Four tourists from the US are attracted by the beautiful scenery along the Yangtze River.

Tian Yannong, a movie producer based in Beijing, visited the Three Gorges in 1995.

"I want to personally see how the completed Three Gorges Dam looks, what changes Yichang, the downstream city, has seen, and whether the historic and cultural relics have been impacted by the project," Tian told the Global Times.

The museum that Tian talks about is a century-old stone ridge that is 1,600 meters by 15 meters in size with inscriptions recording changes in the water level of the Yangtze River for around 1,2oo years in the north of Fuling district in Chongqing.

Preservationist around the world were once concerned the archaeological site would never be seen again after the reservoir was built. Now the site is well-preserved in an underwater museum, which is 30 meters below the river surface. People can go down to river bottom to visit the site by escalator.

Yoshida Nishimura, a Japanese tourist on her second trip to the Three Gorges, was most looking forward to seeing  Baiheliang.

"Baiheliang was not included in my trip 16 years ago, so I have to make up for this regret on this trip," Yoshida told the Global Times.

After seeing the White Crane Ridge well preserved in the underwater museum, Yoshida told the Global Times she was excited and moved to see that the relic with 1,600 years of history can still be shown to the world, in such a unique way.

"I am not only riveted by its hydrologic value, but also enthralled by the characters engraved on it by people of different dynasties, which are of great literary value," she said.

In addition to Baiheliang, the hanging coffins placed or embedded on the steep cliffs in the Little Three Gorges of the Wuxia Gorge, are one of the highlights for the passengers.

Hanging coffins have their origin in the special funeral culture of 3,000 years ago, traditions that were gradually abandoned during the Han Dynasty. How the coffins were placed on such high and steep cliffs remain mystery.

Before the construction of the dam, the world was concerned that these mysterious coffins would be submerged.

Smaller boats took the tourists sailing into the Little Gorges. They took out their binoculars and long-lens cameras to look into the caves on the cliffs. The coffins are placed inside the caves.

"I am so surprised that I can see them again. Personally, I was assuming they were gone before this tour," a tourist told the Global Times after seeing a coffin in a cave with his binoculars.

Michihiko Komatsu, the Japanese consul-general in Chongqing, is one of the guests invited on this trip.

Komatsu said that he had visited the Three Gorges over two decades ago when he was working in the General Consulate of Japan in Guangzhou.

Komatsu remembers his first trip to the Three Gorges vividly. "That was my first trip on a cruise in China," he said.

"Tourism in the Three Gorges was just beginning, without these meticulously planned routes like nowadays," Komatsu told the Global Times.

Recalling the trip 20 years ago,  he said, "The river channel was narrow with a rushing current, the cruise then was shabby, and the food was not as good as the food served in today's cruise."

Komatsu said he hopes more Japanese people will understand that the Three Gorges is still here, and has become more beautiful.

Pang Chee Wee, the consul-general of Singapore in Chengdu, was invited on the tour as a special guest, and this is his first time to travel along the Yangtze River by cruise ship.

Pang also said that Singapore is working with the Chongqing authorities on more projects in various aspects. "Besides the rich historic and natural views, Chongqing has many resources attractive to the young people of Singapore, such as its food and hot springs."

Huang Qingwu feels grateful to the sponsor and host party of the cruise for their meticulous planning and warm service, saying that "Back to the Three Gorges is the best cruise trip I have ever had, and I have learned a lot from this trip from conversations with friends from all over the world."

Huang is a psychological counselor as well as an environmentalist, who organized a hiking tour along the Three Gorges to advocate environmental philosophy in the area in 2001.

Before the construction of Three Gorges Dam, few people in China knew about Yichang. Nowadays many tourists from all over the world come to Yichang every day.

"I barely saw white plastic trash on the river bank in this trip, before it was so bad," said Huang.

Huang also told the Global Times that he has never seen a single flood in Yichang, his hometown city, since the establishment of the dam. He said the city previously had floods every few years.

Tourist David Swanson told the Global Times that his biggest expectation from this trip was to see the completed dam.

"I have less expectations for this second trip because before I came, I thought the views and sites would be fewer than what I saw in the first trip. But I have to say that it's very interesting to see the change," Swanson told the Global Times.

Swanson visited the Three Gorges on a cruise in 2002 after reading a report on the controversial dam.

What impressed Swanson the most is the change in Wanzhou of Chongqing Municipality.

He remembered clearly a staircase of five to ten meters that led to the city from the river bank, and a number of shabby houses.

"A red line was painted on all the buildings and walls to mark the elevation of 135 meters and 175 meters. This meant that several years later everything below that level would be underwater, and that was very powerful to me," Swanson recalled.

"When we were coming into the town, my eyes just popped because this is unrecognizable from what I saw before," said Swanson. "It is a night and day comparison, and I am shocked."

Talking about the Three Gorges Dam, which was under construction then, Swanson told the Global Times that the site was hazy and dusty.

Sixteen years later, as he stood right beside the dam, Swanson said, "It is benign, and it looks like it has found its place, not intrusive as I saw it before. Now the dam is a part of China."