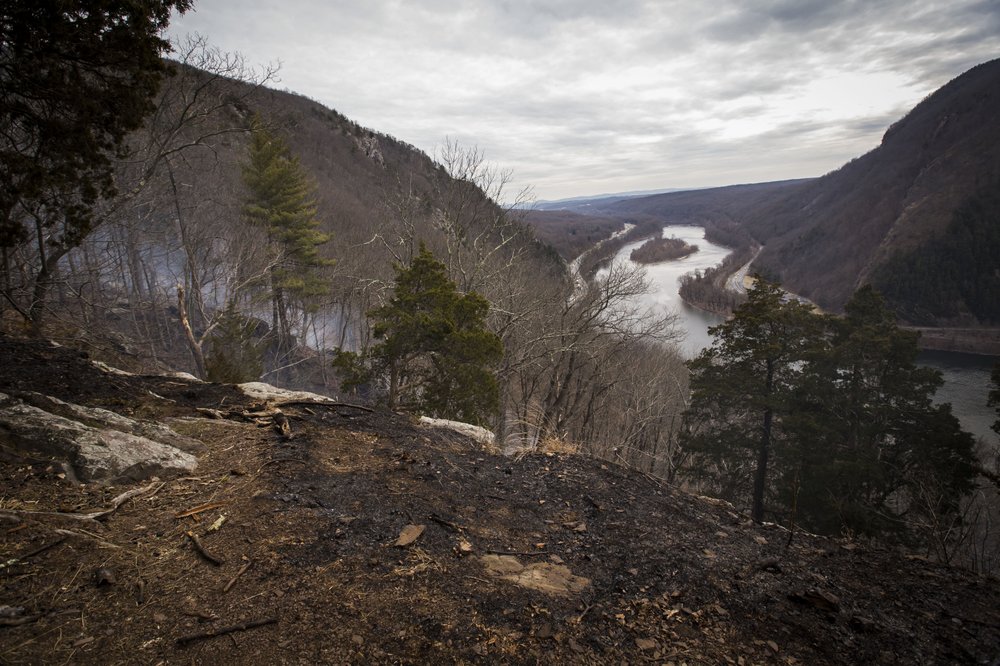 The scorched ground is seen along Mount Tammany's Red Dot Loop Trail following a wildfire that began Sunday and spread throughout the area into Monday, Feb. 24, 2020, in the Delaware Water Gap National Recreation Area in Hardwick, N.J. (Photo: AP)

A forest fire burning through a popular hiking area that is crossed by the Appalachian Trail and a major interstate highway was almost completely contained early Tuesday, New Jersey fire officials said.

The fire began Sunday afternoon on Mount Tammany, a steep, rugged area of New Jersey’s Worthington State Forest and the Delaware Water Gap National Recreation Area on the New Jersey-Pennsylvania border. Fire officials said about 80 acres (30 hectares) have burned overall, but no injuries have been reported.

A cause for the fire had not been determined, officials said. The blaze was about 95% contained by late Tuesday morning, but officials say it likely won’t be fully extinguished until expected rain showers pass through the area Tuesday and Wednesday that will soak any remaining hot spots.

Chris Franek, the state forest fire service’s assistant division fire warden, has said fires on similar terrain usually burn upward. But he said Sunday’s fire, which started below a trail at an elevation of about 1,400 feet, burned downhill because the trail area is rocky and doesn’t have abundant vegetation.

Fires are rare there at this time of year because the area usually has a layer of snow, he said. The fire broke out on a sunny February day that had unusually mild temperatures.

The Appalachian Trail crosses through the recreation area, but remains open.