TAIYUAN, June 24 (Xinhua) -- In the early morning after the rain, Wang Aie, a retiree in north China's Shanxi Province, started her daily walk along an alley in a forest park and took a deep breath. In the past, this was almost impossible. 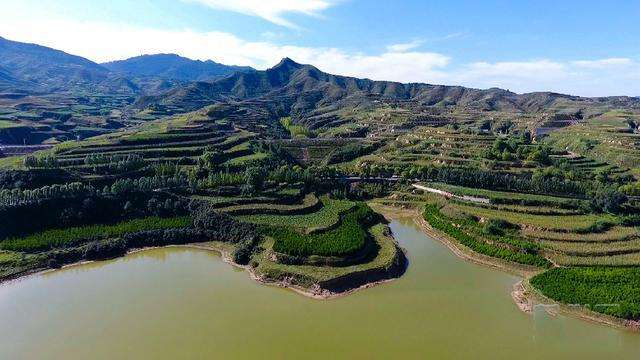 Shanxi is China's major coal production base, and the park, which locates at the Lyuliang Mountains, used to be surrounded by coal mines. The air was dusty and smoky with coal trucks running along the winding roads.

Lyuliang is also on the Loess Plateau, which was known for its barren yellow earth and fragile environment. China has been working on forestation on the plateau for decades, and forest parks are part of the move to change it for better.

The Lyuliang Mountains extend 400 km from south to north, and dozens of counties are dotted along it. Now almost every one of them has built forest parks on the hilltops.

Cao Houhou, a worker in Xi County in southern Lyuliang Mountains, said he was proud to have contributed to planting trees that would eventually become part of a local forest park.

Cao and his fellow workers planted around 40,000 hectares of trees in the poverty-stricken county over the past decade. Local forest coverage has reached 34 percent.

In the early 1980s, the forest coverage in Shanxi Province was around 5.2 percent. The number surged to 20.5 percent in 2015 when China conducted the latest round of forest resource checks in Shanxi.

Bai Xinmin, a retiree in Yonghe County in Shanxi, said people used to starve due to crop failures caused by soil erosion along the Yellow River 20 years ago.

Now a geographical park has been set up there, and local fiscal revenue grew from 5 million yuan in 2002 to 280 million last year. The area of forests also quadrupled.

"The Yellow River turns green in this sector for some time each year, which has attracted many tourists," Bai said.

The newly grown plants in the Loess Plateau has helped prevent over 435 million tonnes of sands from entering the Yellow River each year, helping to improve the environment on the plateau, according to the Yellow River Conservancy Commission.

"My child will grow up along with these trees," said Wang Jianfeng, who took his child to play in a recently built local forest park, "and in 10 years, you'll see this place completely transformed."