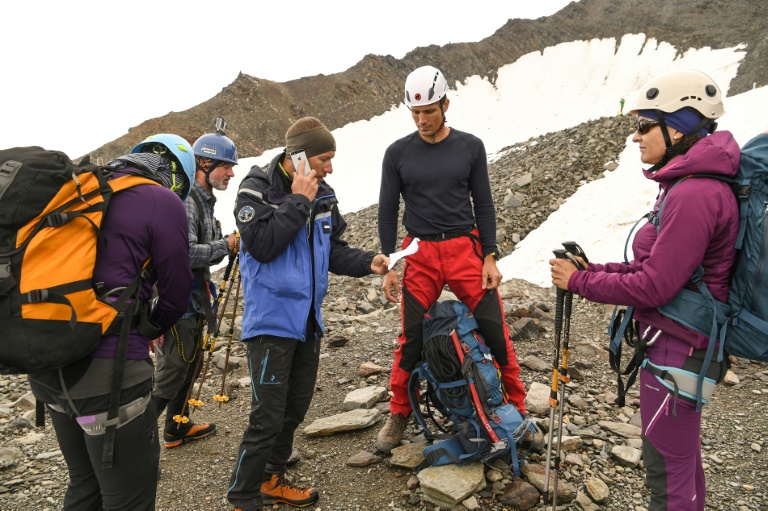 A French gendarme confirms by telephone a hut reservation for a group of climbers before allowing them to start toward the Mont Blanc, the highest peak in Europe (Photo: AFP)

Standing outside their yellow hut on a ridge 3,200 metres (10,500 feet) above sea level, two French gendarmes peer through binoculars at a group of foreign climbers making their way across a scree-littered stretch on what has become one of the deadliest routes to the top of Mont Blanc.

"Rocks, rocks!" one of the climbers suddenly yells, prompting them all to scurry for shelter in the Gouter corridor, on the most popular route to the summit of Europe's highest peak.

Overcrowding on the mountain has again been severe this summer, with more than 300 people pitting their wits against the mountain each day despite the growing risk of rockfall as high temperatures thaw more ground at higher altitudes.

The heatwave that struck much of Europe in the past few weeks only heightened the risk -- on Friday the bodies of three Italian climbers were found.

That brought the death toll since this year's climbing season began to 15, up from 14 dead and two missing last year.

Last month, authorities began turning away climbers who did not have reservations at the 120-bed Gouter refuge, which has been overrun by ill-prepared climbers who have found the challenge too exhausting.

"They get back to the refuge but don't want to keep going down and so they were sleeping in the hallway, sometimes there would be 30 people too many," said lieutenant colonel Stephane Bozon, who heads the gendarmerie's mountain rescue service in Chamonix.

The highly popular "Royal Route" up Mont Blanc is not considered a very technical climb, but officers say people can still quickly find themselves in over their heads while attempting the 4,810-metre peak.

Increased rock slides have even prompted local guides to stop leading clients up in recent weeks.

For those unwilling to put off their ascent, they are advised to start early to ensure they won't have to tackle the Gouter corridor in the afternoon, when the risk of rockslides is greatest.

"Tomorrow you have to go down early, crossing the couloir before twelve, OK?" Bernard-Jacquet told a group outside his hut.

Yet the advice sometimes falls on deaf ears for tourists who have often travelled a long way for the challenge.

Guillaume, a 29-year-old from the Ardeche region of France, said he and his partner were blocked for hours at the Gouter corridor -- which he called the "corridor of death" -- while trying to get down on a recent afternoon.

"It was our own fault we got into trouble," he said.

"There were more moments with rocks falling than without. And the crossing was very long and exposed."

Bernard-Jacquet said that as with most mountaineering risks, "climbers aren't very good at gauging them unless they've experienced them firsthand".

And judging from the steady streams of people going up despite the dangers, he and his fellow officers will be kept busy through the rest of the mission, which ends late September.

"It's a costly operation, in terms of hours and officers, but it's the price we have to pay to keep the problem under control," Bozon said.

Not everyone is happy with their presence nor the access restrictions, however, with many saying they should be left to manage on their own.

"Anybody who's doing this route has to be well aware of the risks," said David Bailey, a British climber who acknowledged that crossing the Gouter corridor was "scary".

Michael Gruber, who had travelled from Austria, was also determined to climb despite the warnings.

"If you want to go to Mont-Blanc I think this is a risk you have to take," he said.

"If the rocks fall we'll just go back (but) hopefully everything is good."