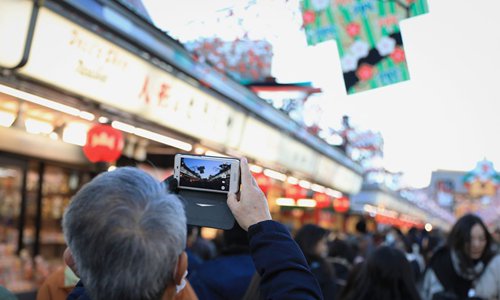 When talking about Chinese tourists, there was a special word "bakubai," or "explosive buying" in Japanese to describe their spending power. However, things have changed over these years. The Chinese tourists are exploring new ways to travel around Japan, shifting their focus to cultural experiences.

China has been Japan's top source of tourists for years, with the number of Chinese visitors surging at double-digit rates for five consecutive years, according to Japanese government statistics. In 2013, about 1.314 million Chinese visitors travelled to Japan, and by 2018, the number had rocketed to 8.38 million.

Japan's tourism industry is benefiting from the rapid growth of Chinese tourists, with shops and restaurants catering to them with Chinese-language signs, broadcast and QR code payment services during China's National Day "Golden Week" holiday earlier this month.

Mr. Wang from Beijing made his eighth trip to Japan in the "Golden Week," during which he visited Yanakaginza and Akabanebashi South in Tokyo, two little-known tourist sites shown in popular singer Jay Chou's new music video. These sites were posted online by Chinese fans after the music video was released.

Wang said that though he toured these sites in the name of "die-hard fans" of Jay Chou, he actually wanted to learn more about the city of Tokyo by foot, exploring exotic lifestyles and enjoying the relaxation.

During the National Day holiday this year, the number of Chinese tourists who chose to have experiential travels like Wang increased significantly. Compared with "explosive shopping" in the past, more and more Chinese tourists are willing to pay for cultural events, such as going to Japan for a concert or a special exhibition.

Meanwhile, the rationality and civilized quality of Chinese tourists have deeply impressed the Japanese people.

He also noted that many Chinese tourists are becoming more "curious" and have an impressive amount of knowledge about Japan.

In September 1974, China and Japan started the Beijing-Shanghai-Tokyo airline route, opening a new chapter in the air transportation of the two countries. As of 2018, the average number of flights between the two countries reached 2,106 flights per week. In 2018, the two-way personnel exchanges exceeded 11 million, setting a record high.

Su Tao, an official of the Chinese Embassy in Japan, said that while Chinese tourists are upgrading consumption and pursuing a personalized and quality travel experience, they are also showing China's development level to the Japanese public.

The changes in Chinese tourists convey new information on the development of Chinese society, showing traditions and contemporary culture of the Chinese nation, according to Su. People-to-people exchanges will also encourage more Japanese visitors to China and experience the country's new changes.