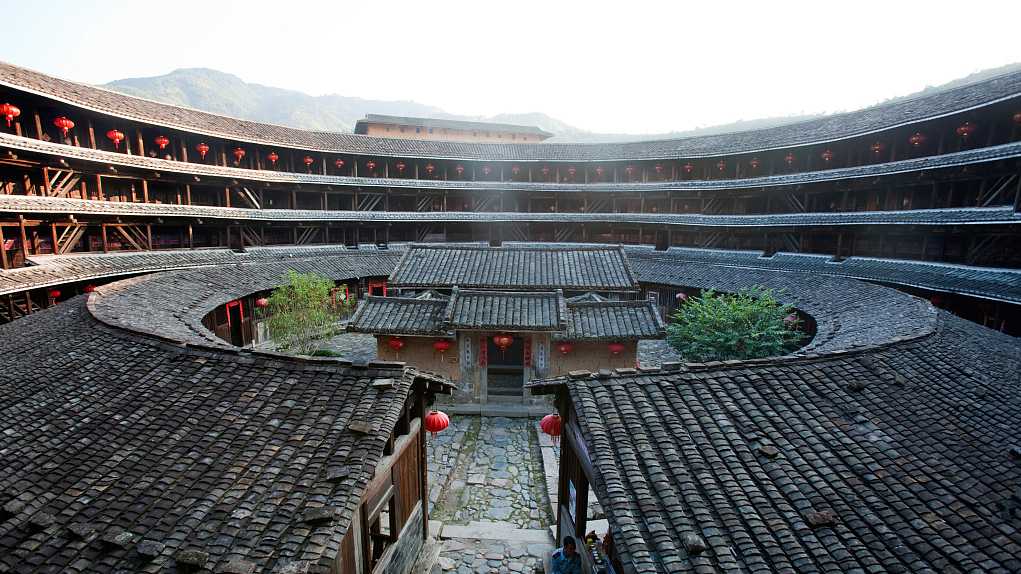 The coastal Fujian Province in southeast China earns its reputation for beauty not just from the seaside scenery, tea, and rice, but also the tulou - or earthen house - a complex of ancient buildings, which are unique to the Hakka in the mountainous areas, constructed between 13th to the 20th century in various shapes and sizes.

Housing a whole clan of almost 1,000 people, a tulou is known as a small kingdom, functioning as a little village or a small society.

It's a perfect example of the strong clan cohesion of Chinese southerners. Parents, children, uncles, nephews, and in-laws all live as one big extended family in a house where the elder members hold absolute authority over juniors.

Built inward-looking, the several stories-high constructions boasts only one entrance and decorative windows on the first floor.

The tulou were first designed for a defensive purpose — to resist gangsters in civil wars and pirates from the sea.

Firm and mysterious-looking, a tulou serves as a family commune but it also has a storehouse for grains, a farm to raise pigs and poultry and the public water supply area.

The exterior wall, made mainly of local red soil mixed with smashed gravels and limes, could be as thick as two meters in its lower part, as a strong fort.

Glutinous rice and brown sugar were used in some parts of the wall to increase its viscosity.

At the same time, bamboo strips and fire sticks were added to the walls with animal bones to enhance the tensile strength.

The walls were as firm as modern concrete. And after they were applied with watertight lime on the outside, the wall has the ability to retain heat in winter and stay cool in summer. It was also fireproof.

Hundreds of tulou are dotted around in Fujian's Nanjing, Hua'an, Pinghe and Zhao'an counties and Yongding District in Longyan city. Most of them are still well preserved and functioning today.

The Hongkeng tulou complex, located in Longyan's Hongkeng Village, was built in the valley where green mountains can be seen to the east, west, and north of the settlement. There is also a river running nearby.

The Lin family started to build a tulou settlement in the 13th century. But by the year 2000, the complex of 46 tulou houses had been home to more than 2,300 people and 638 families.

In Yongding County, it was a rule that all males in a tulou had to have the same family name related by blood.

The ancestral hall was always situated in the center of the complex, where important worship ceremonies and other religious activities are held.

Eryi tulou in Hua'an County is a representative of round-shaped tulou.

Built in 1740 by the Jiang family, the four-story property covers an area of 9,300 square meters.

Its exterior wall is 2.5 meters thick with an outside diameter of 73.4 meters.

What makes Eryi tulou special is the folk artworks it houses, including 349 wooden sculptures, 163 Chinese ink calligraphy pieces, 228 paintings and 226 murals up to almost 600 square meters.

Shaped in double rings, the tulou has a total of 213 rooms.

In the central open courtyard, there are two wells, named yin and yang to form a pattern of bagua, or Eight Diagrams (a symmetry and conservation theory in Taoism). Interestingly, the temperature of the two wells is always one degree different, however the house temperature changes.

Not only in Eryi, but the bagua theory is also widely used as a construction guide and architectural principle in most of the tulou houses, which is believed to dispel evil and guarantee safety.

Zaitian tulou in Zhao' an County was built entirely in accordance with bagua. The complex was designed evenly in eight parts with eight rooms. Every door of the room has a lintel inscribed with a household name, and bagua safety amulets with spells are posted on each door frame.

The Big Dipper tulou complex in Pinghe County earned its name as “the seven buildings sit at two banks of the Tongxi River in the shape of the constellation.” It took 80 years to complete all the seven tulou houses.

One anecdote is that the US once mistook the odd-looking tulou houses for missile launch silos when viewing satellite images during the 1960s. Unable to figure out what the 1,500 mysterious constructions really were, CIA sent two agents disguised as a tourist couple in 1985, and finally found they were actually ancient residential buildings.