ROME, May 4 (Xinhua) -- Ministers of Tourism from the Group of 20, or the G20, on Tuesday pledged support for "safe international mobility initiatives" as a way to help relaunch the world's tourism sector. 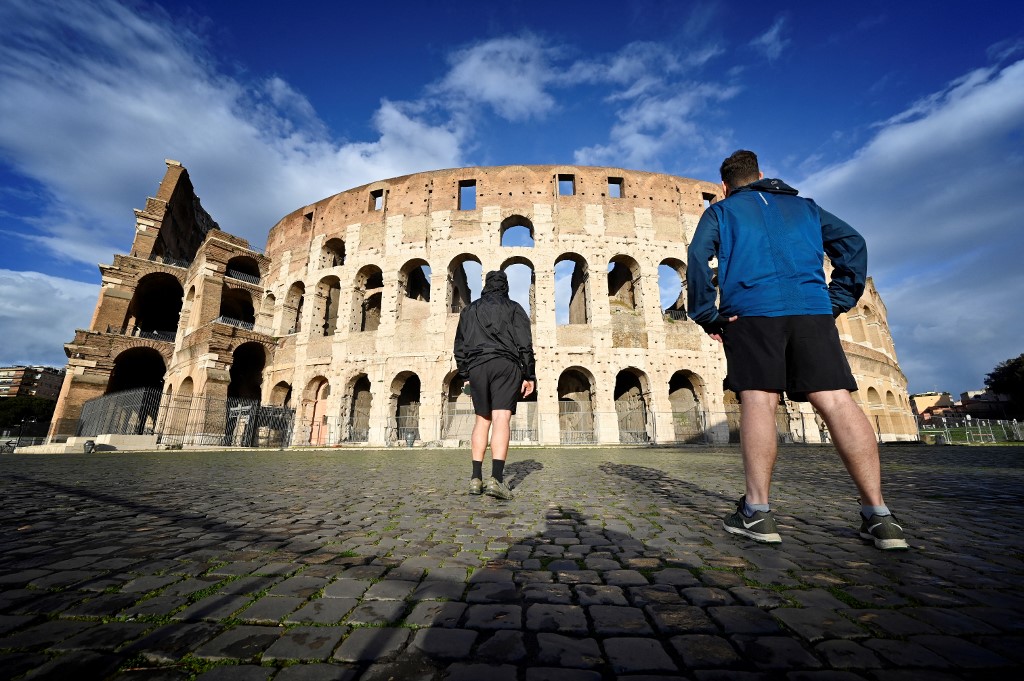 Joggers take a pause in front of the Ancient Colosseum in central Rome, on March 15, 2021. (File photo: AFP)

The ministers agreed that a normalized global tourism industry was "crucial" to the world's economic recovery in the wake of the coronavirus pandemic, Italian Minister of Tourism Massimo Garavaglia told reporters after the day-long virtual meeting of ministers from the G20, which groups 19 countries and the European Union (EU).

The meeting agreed to back efforts for "safe mobility" that coordinates with regional and national initiatives, such as the EU-launched Digital Green Certificate, which shows a person has been fully vaccinated, has coronavirus immunity after recovering from an infection, or has recently tested negative for COVID-19, the disease caused by the coronavirus.

Garavaglia said European Commissioner Thierry Breton has committed to introducing the Green Certificate "as soon as possible." The Italian minister said he estimated the certificates would be ready by mid-June.

"We need common, harmonized criteria for the easing of travel restrictions, and for increased investment in systems that support safe travel, including testing on departure and on arrival," Pololikashvili said.

The G20 communique did not refer specifically to vaccine passports, but it did say ministers wanted to support and coordinate "safe international mobility initiatives."

Italian Prime Minister Mario Draghi made a pitch during the meeting for visitors to return to Italy as tourism ramps up.

Though most participants in Tuesday's meeting attended via video hookup, the event was officially held in Rome, Italy's most popular tourist destination as the country holds the G20 rotating presidency this year.

Draghi said Italy would issue its own alternative to the EU's Green Certificate by the middle of May in a bid to help jump-start the tourism sector that was responsible for 13 percent of Italy's economic production before the pandemic.

"Let's not wait until mid-June for the European Union's pass," Draghi said. "In mid-May, tourists can have the Italian pass. The time has come to book holidays in Italy."

According to data from the World Travel and Tourism Council, global tourist arrivals dropped 73 percent in 2020 due to the pandemic, which led to the loss of nearly 62 million travel- and tourist-related jobs.

The communique said the health crisis had presented an "opportunity to rethink tourism" and reform it, so it can stand on a sustainable footing.