An aerial view of the Tortuga Bay area in Santa Cruz Island, Galapagos, Ecuador -- a popular tourist destination, but one which cannot handle all of the people who want to come if it wants to preserve its rich ecosystems. Photo: AFP

With its iconic giant tortoises, crested black iguanas, huge ocean manta rays and a veritable menagerie of other cool creatures, the Galapagos Islands are one of the most beautiful places you will probably never visit.

Why not? Who wouldn't want to go to a white sand beach and soak up some sun alongside a lounging iguana, or surf in waters with those lumbering tortoises swimming beside you and a rainbow of tropical fish below?

But in order to protect the flora, fauna and ecosystems of this Pacific archipelago that inspired Charles Darwin's theory of evolution, Ecuador is in the odd position of having to turn away perhaps millions of would-be tourists each year.

Keeping a tight lid on tourism is the way the South American country has preserved this volcanic string of 19 large islands, dozens of islets and rocky outcroppings.

Authorities wage this fight as world tourism grows and grows -- it was up seven percent last year -- and they must resist the temptation to let in hordes of visitors, their pockets bulging with dollars.

"The Galapagos are the crown jewel, and as such, we have to protect them," Tourism Minister Enrique Ponce de Leon told AFP. "We must be drastic in caring for the environment."

With a network of small hotels and ferries running between the islands, the Galapagos -- about 1,000 kilometers (600 miles) off the coast -- is an eco-tourism destination that is among the most select spots in all of the Pacific.

The flow of tourists has risen to 245,000 per year and authorities say that's pretty much the limit: the maximum the islands can withstand without harming their various ecosystems. 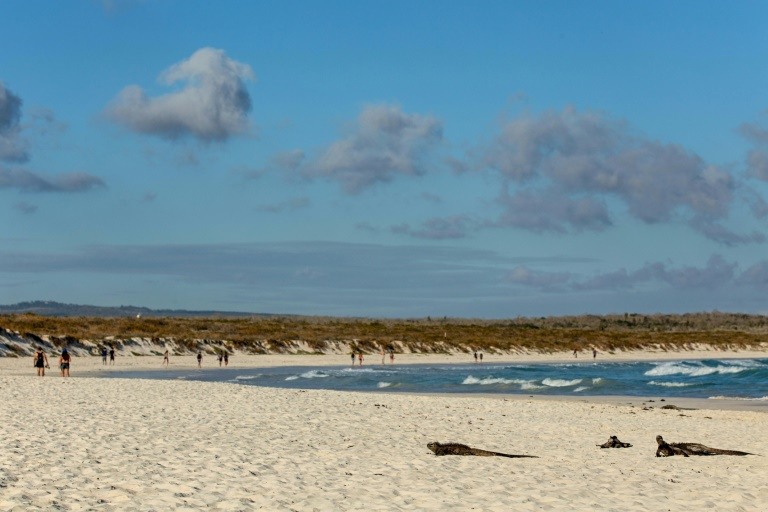 Iguanas sunbathe near tourists in the Galapagos, which welcome about 245,000 visitors a year. Photo: AFP

"The environmental, social and biological features of this place -- which is like no other -- forces us to set a limit, to manage tourism in terms of supply, rather than demand," said Walter Bustos, director of the Galapagos National Park.

Preyed on in the past by pirates and whaling ships, the Galapagos these days confront illegal fishing, the effects of climate change and the arrival of intrusive species such as dogs, cats and rats brought over from the mainland.

The national park was created in 1959 to protect 97 percent of the islands' land surface, and in 1978 UNESCO classified the archipelago as a World Heritage Site.

And a 38,000-square-kilometer marine sanctuary in which all fishing is banned was set up between two of the islands, one called Darwin and the other Wolf. Those waters are home to the highest concentration of sharks on Earth.

The islands depend on imports from the mainland and have limited sources of water, so authorities make sure the human population does not grow. These days, only 26,000 people live on the four islands that are in fact inhabited.

By law, Ecuadorans from the mainland are treated as foreigners on the Galapagos. And to obtain permanent residency, such people have to have been married to a local for at least a decade.

For years, the authorities have been limiting construction and promoting the use of renewable energy sources and electric cars. Plastic bags are banned.

On the island of Baltra, which is the main port of entry, the airport runs exclusively on solar and wind power.

"The challenge is to manage tourism in a sustainable way, one that preserves the ecosystems and generates profits. We must not view tourists as the devil," said Juan Carlos Garcia, conservation director of the World Wildlife Fund in Ecuador.

But of course, limiting tourism here is of no help to the broader Ecuadoran economy, which operates with dollars as the official currency.

And these have been lean years for hard currency in oil-producing Ecuador because of low global crude prices and accumulation of lots of debt. Tourism and mining have emerged as lifesavers. 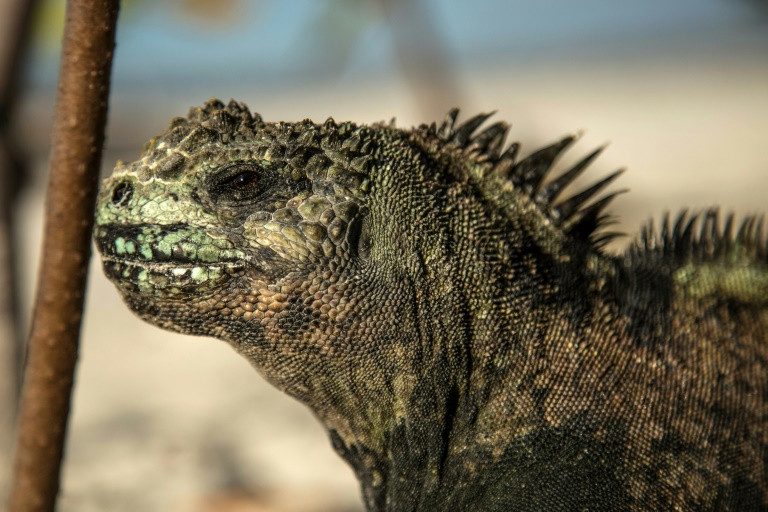 Tourists come to the Galapagos to see the flora and fauna, like this marine iguana (Amblyrhynchus cristatus). Photo: AFP

Last year, visitors to this fabulously diverse country boasting volcanos and thick Amazon jungle shot up 14 percent compared to 2016, totalling 1.6 million. But that is small compared to other countries in Latin America.

President Lenin Moreno's idea is for tourism is to prop up the economy, even more than oil.

For that reason, he decreed an open-skies policy a few months ago to free up air traffic and bring more tourists to Quito and Guayaquil.

And many of these travelers will want to go to the Galapagos. The state-owned airline TAME has announced more flights to the islands.

Will the island authorities be able to withstand this pressure?

"We need to stress quality, and have those who come now stay longer -- have them tour the rest of the country, offering them package deals," says the tourism minister.