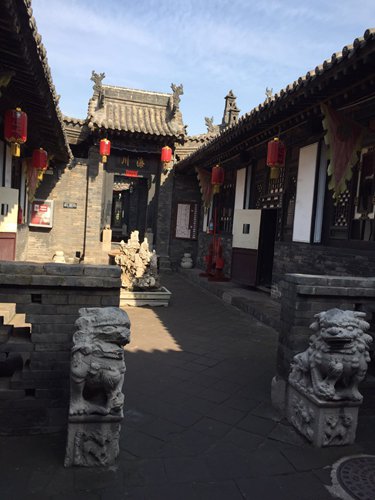 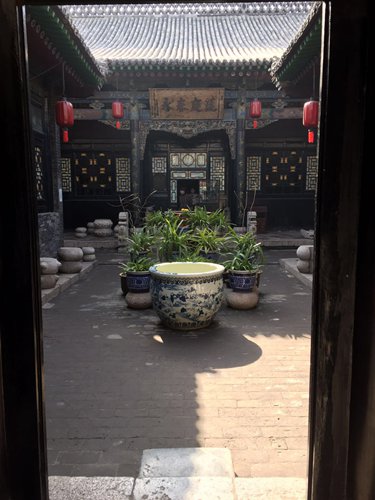 As a person who loves history, ancient cities are always at the top of my list of favorite travel destinations. However, although I don't live far from Pingyao - a county in North China's Shanxi Province about 500 kilometers southwest of Beijing - I had long neglected this gem despite having traveled to even further places. Perhaps since I grew up in an ancient town, the name Pingyao Ancient Town never really caught my attention. Fortunately for me, a recent business trip brought me to this town, causing me to realize just what I had been missing out on all these years and making me eager to introduce the town to others. First encounter I arrived in Pingyao county in the afternoon, four and half hours after escaping the haze in Beijing by train. To be honest, I was a little bit disappointed as I stepped out of the station, since it wasn't a very clear day in Pingyao either and at first glance it seemed that there was nothing fun to do. I hadn't done much research before I left Beijing. My original plan was just to take a stroll inside the ancient town to see if anything interested me, but when the cab dropped me off at the foot of the ancient city wall, I was stunned by what I saw. The wall was higher than any I had ever seen before. It was undecorated - unlike the remains of the ancient city wall in Beijing, which have been repainted to look new and attractive. The plainness of Pingyao's city wall, however, lent it a historical air that was so strong I could practically hear it whispering all the stories it had witnessed.  Because cars are not allowed to enter into the ancient town, I had to walk through the gate. Not noticing some of the streets and alleys where all the tourist sites were located, I just kept walking forward. I eventually reached a section of the city where some old courtyards had been converted into hostels. There were a few deserted houses as well. Out of curiosity, I peeked through the cracks of a broken wooden door. I saw pictures and Chinese characters delicately carved on the gray bricks. Some bricks had been worn down by time. Everything was still and quiet. Alongside the paths, I could see a few elderly people chatting as some tourists walked by and a couple of small local shops selling daily commodities. As I continued walking I soon discovered that I was lost. All the alleys looked the same, and the high walls blocked my sight. Fortunately, I finally found a shuttle bus - the only vehicle allowed in the ancient town - which took me to my destination.  One thing I learned from that experience was to never put too much faith in my sense of direction. A smartphone with a GPS is far more reliable. Even though there are free maps of the ancient town available around the town, the map doesn't show all the small paths that you can find yourself walking down, and even locals aren't familiar with everyplace in the town. 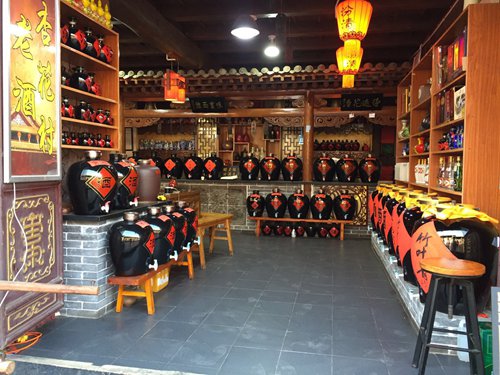 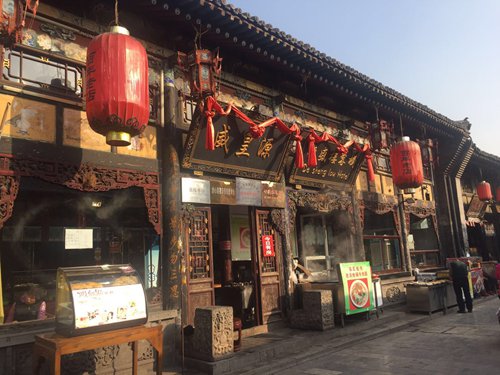 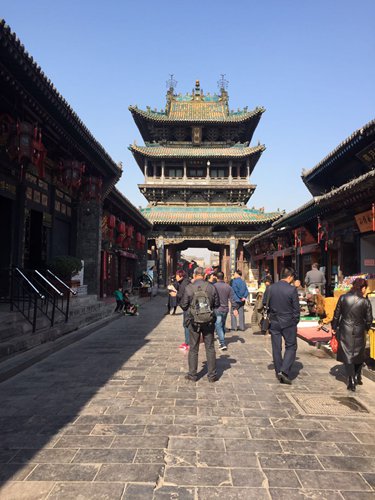 Busy streets I walked around the ancient town again the next day. This time I went straight to the commercial area, which consists of the West Avenue, East Avenue, North Road and South Road. What I saw there was completely different from what I experienced the day before - it was extremely busy, although not as commercialized as some tourist sites. Through the introduction of some guides, I learned that Pingyao Ancient Town's history reaches back some 3,000 years. The overall shape of the town, fenced in by walls during the Ming Dynasty (1368-1644), is similar to that of a turtle, with two gates each on the east and west sides resembling its feet and single gates on the north and south walls acting as its head and tail. Most of the ancient buildings that remain today were built during the Ming and Qing (1644-1911) dynasties. Tourist sites worth visiting include the former county Yamen (an imperial government office), Rishengchang Piaohao (an exchange shop that was an early form of bank), Temple of Confucius, as well as  the Temple of the City God. I did not visit all of them but was deeply impressed by the Rishengchang Piaohao. The construction of the  courtyard was stunning, and I was entranced by the stories of how the people of the day managed China's first draft bank and entertained by the anecdotes of events that once happened in the courtyard. Built in the 1842, Rishengchang grew out of a dye house named Xiyucheng. The late Qing Dynasty saw a number of merchants from Shanxi doing business in the Beijing. At the end of every year, there was a tremendous need for the transportation of silver, one of the major currencies in China at the time, from the capital to Shanxi. Since it wasn't easy or safe to transport the silver over such great distances, Lei Lütai, the manager of Xiyucheng, came up with the idea of using a "ticket" for the exchange of money. That later led to the full business of money transfers and transactions, deposits, and loans. To avoid faking tickets, a series of security measures were used when drafting them. Certain Chinese characters were "borrow" as a sort of code to replace the normal Chinese characters used for numbers. This code was often changed to prevent people from cracking it.  During its peak, Rishengchang had more than 40 branches around the empire.  Electronic tourist guides with both Chinese and English are available at every ticket windows and cost 20 yuan ($3) with a 100 yuan deposit. 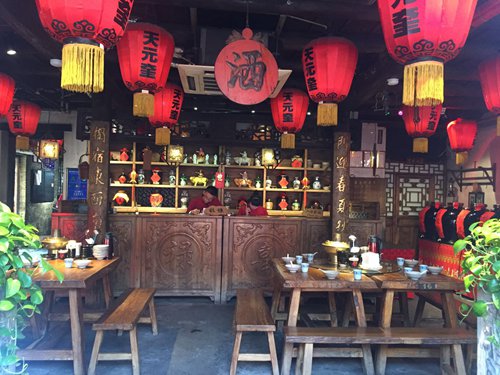 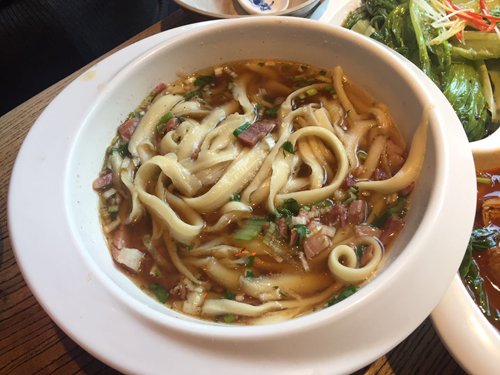 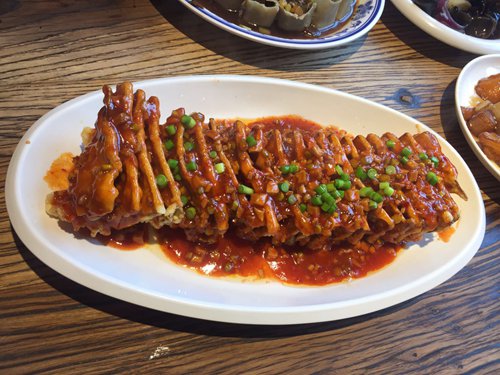 Local flavors  Enjoying delicious local food is always must-do on my travel itinerary. Most of the small restaurants I ate at were good, but one in particular stood out from the rest and is a definite must-not-miss place to go if you come to Pingyao: Tianyuankui.The restaurant was recommended to me by a local. Although she marked it on my map, it still wasn't easy to find since the outside of the restaurant isn't very eye-catching. Located on South Road, it is a combination of a hotel and a restaurant, and first opened in the late 18th century. While the antique style furniture may not be that special compared to what you find in the rest of the ancient town, the flavor of the food is a definite stand out. Kao Laolao (a kind of salty dish made using oat flour), Changlong Qiezi (spicy fried eggplant) and beef noodle soup - Shanxi is known for its noodles - are some of the dishes I recommend. If the weather is cold, you can also order hotpot, which I guarantee will warm you up lickety-split. Shanxi is also famous for liquor and vinegar. Next to Tianyuankui, there were a few shops along the major avenues that sell homemade liquor and vinegar. Don't worry about trying to fit these into your luggage, the shops will also express mail you your purchase so it will be waiting for you when you get home.  Transportation The public transportation in Pingyao is not very convenient since there is no subway. For tourists who do not speak Chinese, my advice is to take a cab straight to the ancient town. As for getting around inside the ancient city, the shuttle bus costs 10 yuan. If you need to travel to other places outside the town, you should use a phone app to book a car. Otherwise you will find yourself standing by the road for a very long time hoping a vacant taxi comes by.