TRAVEL Good dog, bad dog ... Delta wants to know before you board

Good dog, bad dog ... Delta wants to know before you board 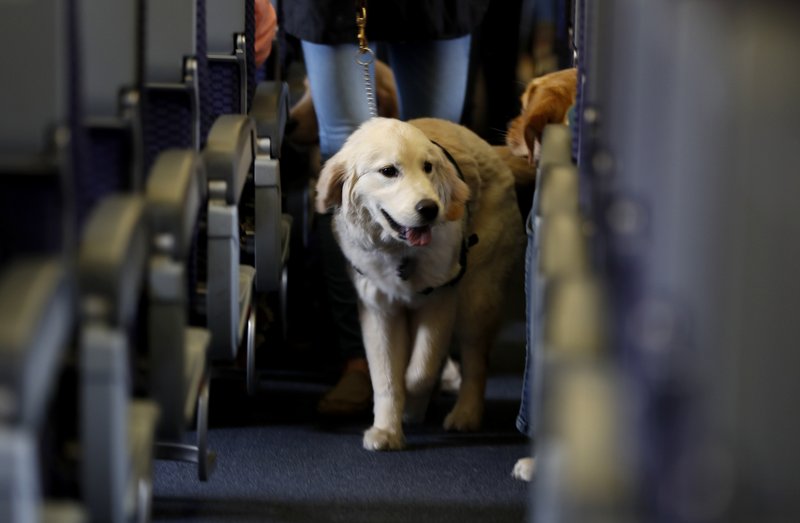 Owners of psychiatric service animals and of those used for emotional support will need to sign a statement vouching that their animal can behave. But owners will be on the honor system — they won’t have to show, for example, that their dog graduated from obedience school.

The new requirements don’t apply to pets, for which owners pay an extra fee. Delta, American and United all charge $125 each way for small pets in the cabin. Pets that don’t fit under a seat must fly in the cargo hold, also for a price.

Delta’s policy change arrives with the number of animals in the cabin increasing.

A rift has grown between disabled people who rely on trained service animals, usually dogs, and passengers with support or comfort animals, with many in the first group suspecting that those in the latter are just trying to avoid paying $125.

However, owners of comfort animals, including veterans suffering from post-traumatic stress syndrome, often say that they wouldn’t be able to travel without their companion.

John Laughter, the airline’s senior vice president of safety and security, said there are insufficient rules in place to screen animals for health and behavior issues.

Last June, a 70-pound dog flying as a support animal bit another passenger several times in the face on a Delta plane in Atlanta. The victim was hospitalized.

Delta is seeking a balance “that supports those customers with a legitimate need for these animals” while maintaining safety, Laughter said.

Sara Nelson, president of the largest flight attendants’ union, praised Delta’s decision. She said passengers abuse the system to bring untrained animals on board, and if it isn’t stopped it could lead to a crackdown that will hurt veterans and the disabled “who legitimately need to travel with these animals.”

Eric Goldmann, a sales representative in Atlanta for a health care company, posts pictures on Twitter of support animals that he thinks should have stayed home. He says owners are abusing the system and creating safety hazards.

“These dogs are everywhere, they’re out in the aisles,” he said. “Planes have to be evacuated in 90 seconds in an emergency. If animals get in the way, people will panic.”

Although exact figures aren’t available, airline employees say dogs and cats are the most common animals on planes, but there have been sightings of pigs, snakes and turkeys too.

Delta’s new rules are aimed at two categories: service animals, which receive specific training to help blind or disabled passengers; and so-called emotional-support animals, which require no training at all. Both fly for free and are not required to be caged during the flight.

The emotional-support group has been growing rapidly, and it is the target of most of the new Delta procedures. Delta, the second-biggest U.S. airline by revenue, said it transports about 700 service and support animals every day, nearly 250,000 per year. More than two-thirds are emotional-support animals. That does not include animals for which owners pay a fee to keep in a carrier under their seat during flights.

The boom in animal travel has prompted airports to add places where pets can relieve themselves.

Federal regulators have interpreted a 1986 access-to-travel law to allow support animals in airplane cabins and in apartment buildings that do not allow pets. That has created a cottage industry of online companies that help people establish their pet as an emotional support animal.

Airlines must allow support animals in the cabin, although they can require owners to present a letter from a doctor or other medical provider who can vouch that the human traveler is helped by having the animal there. Delta will now ask to see those letters 48 hours in advance.

The Transportation Department, aided by an advisory committee of airline and passenger advocates, has been considering tightening the definitions of service and comfort animals but missed its own deadline last year.

The airlines also complain that they have no way to verify that doctors who sign off on comfort animals are qualified to decide if someone needs the emotional support. Last year an undercover reporter for a Los Angeles TV station found a chiropractor willing to sign a letter allowing the woman’s dog to fly for free if she paid his $250 fee.

American Airlines and United Airlines said they were reviewing their animal policies. Both reported seeing a significant increase in the number of emotional-support animals since 2016.

Delta Air Lines will soon require owners of service and support animals to provide more information before their animal can fly in the passenger cabin, including an assurance that it’s trained to behave itself.

The airline says complaints about animals biting or urinating or defecating on planes have nearly doubled since 2016.

Starting March 1, Delta will require owners to show proof of their animal’s health or vaccinations at least 48 hours before a flight.