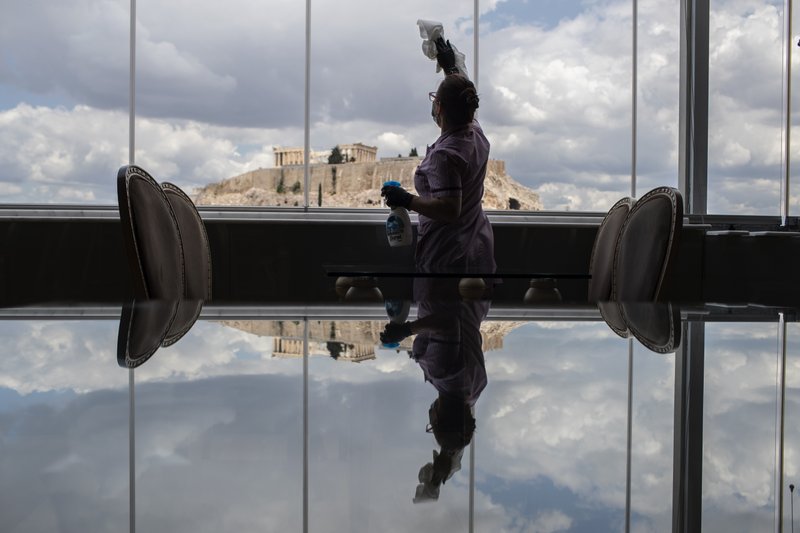 Hotel worker Mailinda Kaci cleans the windows in a restaurant area at the Acropolian Spirit Hotel in central Athens as the ancient Acropolis is seen in the background, on Monday June 1, 2020. Lockdown restrictions were lifted on non-seasonal hotels Monday as the country prepares to start its tourism season on June 15. (Photo: AP)

International flights with screening procedures will return to Athens and Greece’s second-largest city of Thessaloniki starting on June 15 and will be expanded to the rest of the country on July 1.

Screening for arriving passengers will be based on an assessment by a European Union flight safety authority, with arrivals from low-infection countries being subjected only to random testing.

“Greece is continuously monitoring epidemiological data, in collaboration with experts and European and international organizations,” government spokesman Stelios Petsas said. “We will receive visitors from countries that are improving in their infection curve and remain vigilant in the event of any deterioration.”

Year-round hotels were allowed to reopen Monday but many chose to remain closed until closer to the start of the tourism season, citing low bookings.

Panos Betis, who runs a travel business and three hotels in Athens, decided to reopen Monday, arguing that it would be easier to gradually increase capacity.

Other businesses in Greece were allowed to restart Monday, including campsites, wedding reception services, tattoo parlors and dating agencies.