TRAVEL Greece not to allow direct flights from UK, Sweden until July 15

Greece not to allow direct flights from UK, Sweden until July 15 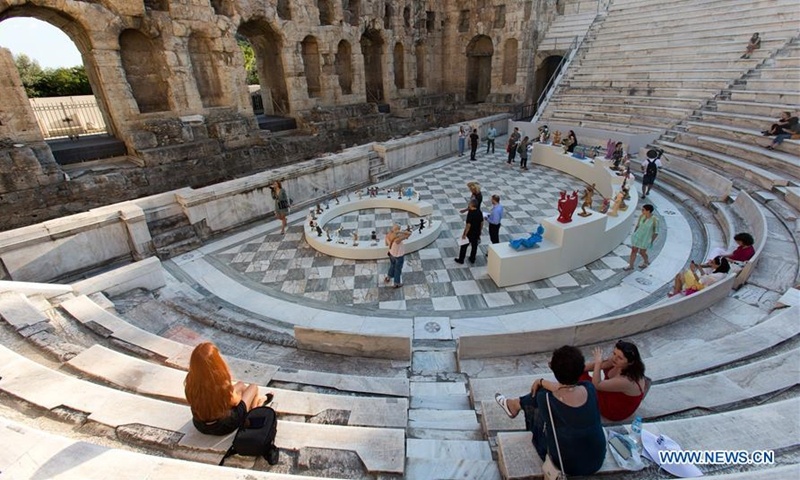 People visit a contemporary sculpture exhibition at the ancient Odeon of Herodes Atticus in Athens, Greece, on June 25, 2020. (Xinhua/Marios Lolos)

Direct flights from Britain and Sweden to Greece will not be allowed until July 15, Greek authorities said on Monday, adding that they would use EU guidelines to determine which countries were considered at high risk of spreading the novel coronavirus.

British holidaymakers are a primary market for the Greek tourism sector, which is facing a plunge in bookings due to the COVID-19 pandemic that is crippling economies worldwide.

Greece reopened its main airports in Athens and Thessaloniki to more international flights on June 15, and will reopen all others on July 1.

While flights from most European destinations will be permitted from that date, those from the UK and Sweden will not.

"The whole process of opening up is dynamic, and there will be a continuous review of the situation," said Greek Prime Minister Kyriakos Mitsotakis, who chaired a meeting with health, civil protection and tourism officials on Monday.

Greece was expected to be among the countries considered low-risk for which Britain has said it will ditch a compulsory 14-day quarantine and introduce a three-tier grading system based on their COVID-19 rates.

Earlier this month, Sweden said it would lift its advice against non-essential travel to Greece and nine other European countries from June 30.

Greece has managed to contain the spread of the virus to 3,376 cases so far, performing better than other EU countries mainly due to its early lockdown. It has been lifting travel restrictions gradually since May. Authorities said that from July 1, all persons travelling to Greece would be obliged to fill in a passenger locator form at least 48 hours before entering the country.