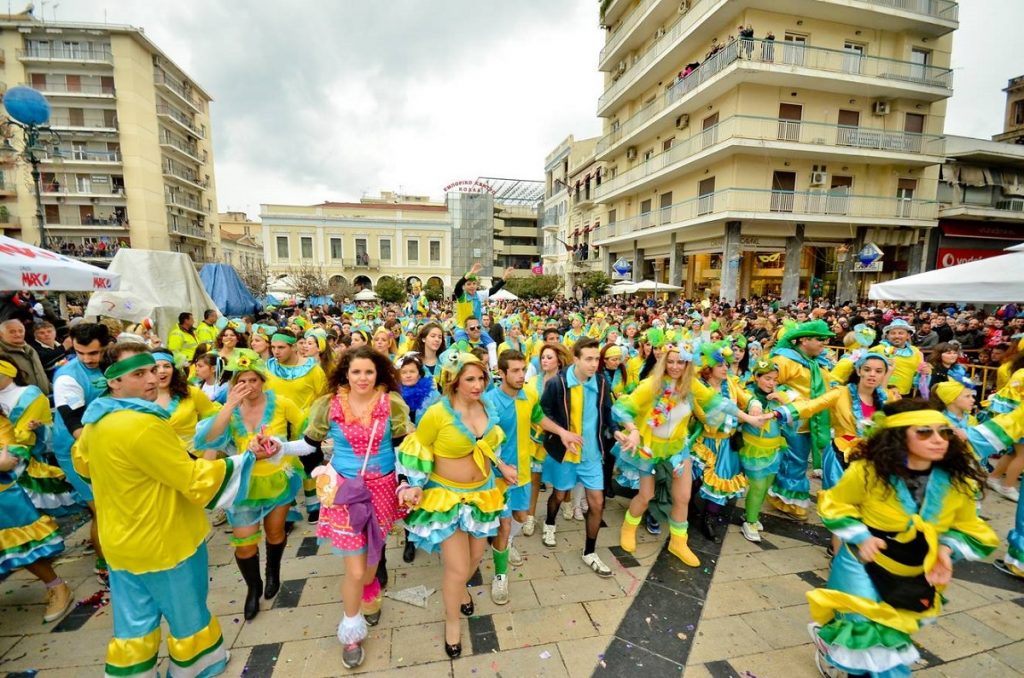 A group of revelers from the city port of Patras in western Greece which has become the "capital of carnival season" in Greece for decades welcomed airport visitors with music, dance and delicacies to give them a taste of their festive traditions and share joy.

"It is one of the events we organize in the context of our cultural program 'Fly me to the moon'. The past two years we focus on the promotion of customs, gastronomy and dances from all regions of Greece. Now that we are celebrating Apokries (abstention from meat in Greek), we brought Patras here instead of going to Patras," Ioanna Papadopoulou, AIA Director of Communications and Marketing told Xinhua, using the term most Greeks prefer instead of carnival.

The Patras carnival is the oldest one in Greece and counted almost two centuries of history and the largest, attracting over 300,000 visitors annually in recent years, according to local officials.

This year's theme is "happiness and how everything leads to it" and this was the message locals who greeted people dressed in costumes conveyed, urging them to visit Patras.

The month-long festival this year ends on March 1 this year, but until then the city hosts numerous parties.

The small party staged inside the Athens airport in the framework of the "Fly me to the moon- Sounds Greek to me" program, was warmly welcomed by travelers.

"It is great (the response). Foreign travelers are excited, they participate in dancing and of course taste the delicacies offered, they are informed of the customs and traditions of our country's regions and certainly Greeks are happy as well," Papadopoulou noted.

"This is a very nice surprise, this is the first time we saw something in an airport and the music... you can't stop, you have to move with it," Claudia, a tourist from Belgium, told Xinhua during a break from dancing.

Her winter holidays in Greece with her friend Annik just ended and were returning home from Athens airport on Friday, but they were convinced to add Patras to their holiday schedule next year.

"We are going to visit Patras for sure. We love it already," she said.

"We like very much the music and the atmosphere," Annik added.

Anta Remounti was among the revelers who persuaded the two fiends to join them next year. She is a pensioner who used to work as an administrative employee at Patras prison and currently she is the head of volunteers in the Patras carnival.

"People are happy to see us, they approach us, they are dancing with us, they try the local products we have brought like loukoumia (a dessert), tentura (a liqueur) and chocolates we are tossing around at the end of each event these days during the carnival season," she told Xinhua.

Asked to reveal the secret of success of the Greek carnival, she said that people should visit and find out on their own, celebrating with locals.