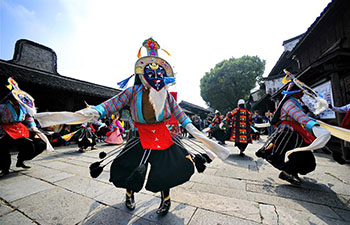 DUBAI, Oct. 23 (Xinhua) -- The number of Russian tourists travelling to the six Arab countries of the Gulf Cooperation Council (GCC) will surge by 125 percent in 2023, a study said Tuesday.

The number of Russian tourists visiting the GCC countries, including the United Arab Emirates (UAE), Saudi Arabia, Kuwait, Bahrain, Qatar and Oman, is expected to reach 2.1 million in 2023 from 933,000 in 2018, according to a report published by Colliers International and commissioned by the annual Arabian Travel Market Fair.

Russia's economic ties with the GCC have been strengthened in recent years due to the introduction of new airline routes, loosened visa regulations for Russian nationals, oil price recovery and the stabilization of the Russian currency rouble, said the report.

Russia has maintained one of the top 10 tourist source markets for the UAE, with 530,000 Russian visitors entering the Gulf country in 2017, a 121-percent increase from the previous year.

The UAE introduced the policy of visa on arrival for Russians in 2017 in order to attract Russian tourists.

Dubai's major air carrier Emirates Airline this year expanded its services to Russia, including running a third daily flight to Moscow and flying a A380 airplane to the Russian city of Saint Petersburg.