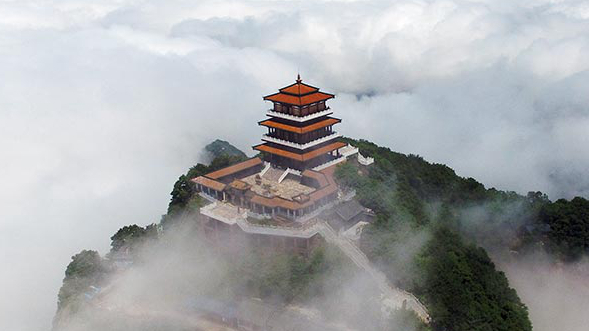 A mountain has appealed to many with its household folklore, rising patriotism education, Taoism culture and stunning scenery.

Many Chinese learned the classic tale "The Foolish Old Man Removes the Mountains" back in their elementary school time. In the story, a 90-year-old man attempts to move two mountains standing in his way by himself and fails to make much headway. He decides the job would fall on his children after him. But his perseverance impresses the gods who grant his wish.

One of the two mountains is Wangwu, located in Jiyuan, central China's Henan Province, which was clad in red-and-yellow leaves earlier this month.

Wangwu Mountain, named a UNESCO world geological park in 2006, covers an area of 270 square kilometers, with the peak at 1,715 meters, and has many Taoist temples.

"The Yugong (name of the man in the fable) spirit is what visitors look forward to here," said Gu Luyu, a local tour guide.

The fable's author Lie Yukou, from the Warring States Period (475-221 BC), was inspired by a real-life story of a man who helped build a road in the area.

The story was widely popularized after being quoted by Mao Zedong in 1945, in a call for collective action against imperialism and feudalism.

President Xi Jinping has also proposed the story and given it a new era spirit since the 18th National Congress of the Communist Party of China in 2012. Xi also mentioned the story when talking about connectivity at the Asia-Pacific Economic Cooperation summit in Beijing in 2014, as well as while talking about poverty alleviation in 2015.

A resort on the mountain is seeing more tourists as awareness of the "Yugong spirit" increases. A patriotism education facility was also opened to the public in May.

"People can come here and experience the plain living of old times," said Zhao Xiaomin, manager at the patriotism facility, which is on the southeastern foothill of the mountain.

"We built a road and made the best use of a deserted village to present the past simplicity of households," Zhao said.

People dressed in Red Army uniforms were seen moving around earlier this month. They are from government offices and companies, Zhao said.

The facility has been in touch with some 12,000 Party branches across Henan, and usually receives around 10,000 people every month, involved in a program called "red tourism education", Zhao said.

Museums, films, shadow plays and frescoes recounting Yugong's life have been created for visitors to experience the spirit of the story's character up close. Carrying poles and wheelbarrows are also available for those who want to feel what it's like to "move a mountain." In the future, infrastructure at the facility and around will likely be improved to cater to the patriotism education.

Some 300 standard rooms and 40 sets of boutique homestays will be developed.

A large-scale conference site will also be built, with the largest room able to house up to 10,000 people.

Moving upward from the base of the mountain, one can see cypress trees near the Yangtai Palace, a hall inside which is thought to be the largest timber structure of the Ming Dynasty (1368-1644) in Henan. Many visitors are seen burning incense sticks and praying at the Taoist hall. The reliefs on stones in the hall feature dragons and other mythical figures.

Leaving the palace, people can opt for a funicular coach that takes them to the top of the mountain in a short time. Hiking up to the peak from the palace takes about two hours. The peak is covered in mist in the mornings, especially on colder days. The cliffs and views below are magnificent, especially when the mist clears.

Visitors can also see monkeys near a temple at the mountaintop. The animals aren't bothered by the presence of strangers.

"We will build a street featuring local folk culture," Gu said of an ongoing construction at the foothill of the mountain.

The project includes setting up food, yoga, tai chi and traditional Chinese medicine kiosks along the street once completed.

"We're looking forward to more people staying here for a while," Gu said, "and, better appreciate the charm of the mountain."