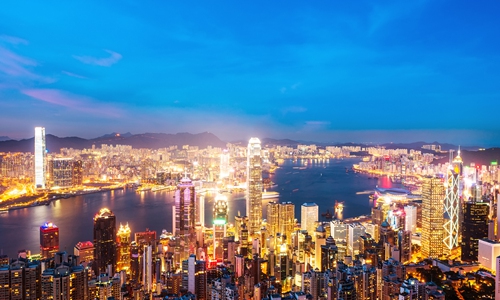 The Hong Kong Tourism Board (HKTB) has decided to continue preparations for the upcoming Christmas holiday and the spring festival, which falls in January next year, with the aim to attract more visitors to the city, but it is still too early to predict the outcome, a spokesperson told the Global Times on Tuesday.

The Lunar New Year parade will be replaced by a four-day celebration including a carnival, food, and decorations. It will run from the first day of the Lunar New Year, which falls on January 25, 2020. The HKTB is still seeking an appropriate location for the celebration, Dane Cheng, executive director of the tourism board, told the Global Times Tuesday.

It is the first time the parade will not be held since its launch in 1996, South China Morning Post reported Tuesday.

The adjustment is a normal one, and it is not related to the ongoing unrest, the spokesperson said.

As for the countdown activity on December 31, the HKTB has no plans to cancel it, Hong Kong news outlet mingpao.com reported on Tuesday. The authority is making full preparations, but it will put public safety first.

It will be difficult to revive the city's hard-hit tourism industry in the short term due to the ongoing unrest, industry analysts said.

As one of Hong Kong's core services industries, the tourism sector has been heavily affected due to the protests in the city since June.

Tourist arrivals in Hong Kong slid by 40 percent in the first 10 days in November compared with the same period in October, according to Cheng.

The board aims to gather local businesses including airlines, travel agencies, hotels, restaurants, and stores to promote special offers for not only tourists but also Hongkongers and those from outside the city, said Cheng.

Hong Kong's tourism sector suffered a significant downturn during this year's National Day holidays, which ran from October 1 to 7, with the number of tourist arrivals dropping roughly 50 percent year-on-year in the first six days of the seven-day holiday.

The Hong Kong Special Administrative Region government canceled a scheduled fireworks show on October 1 due to concerns about public safety.

"It's hard to bring the local tourism industry back to normal in a short period, although local protests have tended to scale down," Song Ding, a research fellow at the Shenzhen-based China Development Institute, told the Global Times on Tuesday.

Hopes of revitalizing Hong Kong's tourism sector via the upcoming holidays this winter seem dim, according to Song. That effort "needs at least one or two quarters," he said.

Even if the protests clear up, people might still lack confidence in the security situation in the city, Song noted.