TRAVEL Hopes high as tourists touch down for Thailand re-opening

Hopes high as tourists touch down for Thailand re-opening

Tens of thousands of travellers were expected to touch down in Bangkok and the holiday island of Phuket on Monday as Thailand reboots its tourism industry after 18 months of Covid curbs. 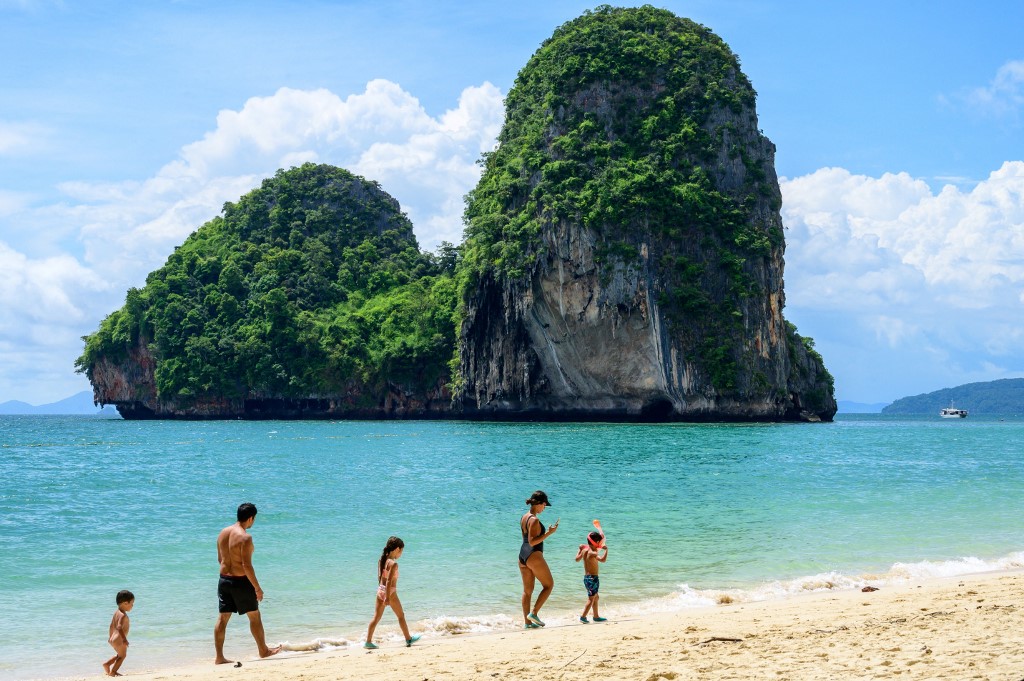 A picture taken on October 30, 2021 shows tourists enjoying Phra Nang Beach in Krabi on October 30, 2021 as the country prepares to welcome visitors fully vaccinated against the Covid-19 coronavirus without quarantine from November 1st. (Photo: AFP)

The coronavirus pandemic hammered the kingdom's tourism-reliant economy, which last year saw its worst performance since the 1997 Asian financial crisis with arrivals down more than 80 percent.

Thai authorities have given the green light to vaccinated tourists from more than 60 "low-risk" countries to skip hotel quarantine -- providing the sector a much-needed lifeline.

Bangkok's Suvarnabhumi airport and Phuket's international terminal will be the first to receive visitors under the relaxation, with the rest of the country following suit.

Thailand hopes to capitalise on travellers escaping the winter blues during December, with several European countries, the United States and China on the approved list.

"The most important thing that the government and I are thinking right now is to make people's livelihoods return to normal," Premier Prayut Chan-O-Cha said Friday.

Tourism accounts for nearly a fifth of the economy and the impact of the pandemic has reverberated across various sectors, from restaurants to transportation.

But authorities expect 10 to 15 million visitors to return next year, with revenues forecast to surpass $30 billion.

"In 2023, we believe the revenues will be close with the figure of the year 2019," tourism minister Pipat Ratchakitprakarn said.

Industry insiders are less optimistic however, especially with regional giant China -- the source of the lion's share of tourists -- still requiring returnees to undergo a strict quarantine programme.

Thailand is still registering about 10,000 Covid infections a day while only about 40 percent of the population have received two doses of a vaccine.

In Bangkok the double-dose vaccination rate is higher at close to 80 percent.

'Cannot be the same'

A pilot re-opening scheme dubbed the "sandbox" kicked off in July, with Phuket allowing fully vaccinated visitors to roam the island paradise for two weeks before being allowed to travel to other areas of Thailand.

But it drew just 58,685 visitors in four months, a drop in the ocean compared to the numbers Thailand has come to expect.

Beachside vendors in Phuket were itching for a higher influx on the eve of the re-opening.

Dit, 18, who works at his uncle's sun lounge and juice bar on Kamala Beach, said their income was about $150 a day before the pandemic.

The business was forced to close for several months but re-opened three weeks ago and is now generating about $30 a day.

"We had to use our savings, grow vegetables and catch fish to survive," Dit told AFP.

"This (re-opening) will be better than the small sandbox tourist numbers, but we don't expect all the deck chairs to be filled straight away."

Further down the beach a trio of fire dancers wowed a dozen guests eating dinner at a hotel with a daredevil display of twirling and fire-breathing.

"We haven't had much work. Not much money. I have a four-year-old son. It's been a hard time," one dancer told AFP.

But in Koh Phi Phi -- a popular island stop on the booze-fuelled backpacker trail -- entrepreneurs were wary of a return to "business as usual".

"Before it was the cheapest tourists in the world and all they wanted was sex, drugs and alcohol," said Roger Andreu, who works at a dive shop.

"We need to make money but it cannot be the same."