Important vessels of the city's history

Taking a cruise ship and traveling along the Huangpu River is a classic and popular tourist activity in Shanghai. (Photo: Gao Erqiang/China Daily)

More than a century ago, when the road and metro systems in Shanghai were not as advanced as today, hundreds of thousands of people relied on ferries to travel to work or get around the city, using the Huangpu River as the main transportation route.

According to the Shanghai Ferry Company, ferry services in the city emerged around the 1900s when a construction agency rented a small vessel to transport their employees and goods every morning from Puxi to Pudong. The company's records also show that in 1993, some 370 million passengers took ferries to get around Shanghai.

In those days, about 100 ferries operated daily across 23 ferry lines on the Huangpu River which divides the city into two parts: Pudong and Puxi. The price of a ferry ticket then was 0.06 yuan for a 5-minute single trip.

According to Liu Fuqiang, a cruise ship captain who previously spent 28 years working on ferries, the ferry industry peaked in the 1980s when daily passenger volume hit 1 million.

The 59-year-old recalls how the Pudong area during that time was filled with farmland, factories, shipyards and textile mills. The space that the Oriental Pearl TV Tower now stands was still occupied by the Shanghai Shipyard Company. The look of residential housing then was also a far cry from what people live in today.

"There were many typical shikumen houses and Baroque architecture along the river in Puxi area, but they were less fancy than they are now," he said.

Liu remembers that most passengers were factory workers or farmers who collected vegetables in Pudong and sold them in government food markets across the river. Cars and trucks were also transported by ferries. Unlike today, rush hour traffic for ferries began as early as 5 am, according to Liu.

"It was like a fierce battle. Some had to hold their bicycles over their heads so that they could squeeze into the ferry," he said

"The police often had to be at the ferry terminals to maintain order as the queue of passengers could measure 100 meters. Can you imagine 1,200 people queuing to board the ferries every morning? Back then there was a saying: 'It is better to rent a bed in Puxi than own a room in Pudong!'"

Passenger volume inherently declined as Shanghai’s transportation systems became more comprehensive. Following the construction of the Nanpu Bridge — the first cross-river bridge in the downtown area — in 1991, another 12 bridges as well as 11 tunnels and 15 metro lines were added over the past 27 years.

But this mode of transport has not completely disappeared from the landscape. According to Shen Jianping, the Huangpu River is today still home to 34 ferry stations that are serviced by 17 air-conditioned ferries. Every day, about 150,000 people and vehicles rely on this transportation medium to get around.

While passenger volume for ferries steadily declined in the 1990s, the river cruise industry, on the other hand, was in the midst of a boom.

"Cruises grew in popularity in the 1990s as the pace of urbanization in Shanghai accelerated," said Fang Ao, the manager of Shanghai Huangpu River Cruise Company.

“That was a period when people’s leisure preferences changed from having a picnic in a park to taking a romantic tour on a cruise ship at night when they can enjoy the cool breeze.”

Before 1998, only two ships offered sightseeing tours along the river. Today, there are 35 cruise ships that operate along the waterway.

According to Feng Haiping, a former manager at Shanghai Ferry Company, the rise of the cruise industry was in tandem with the modernization of the city. As the landscape changed dramatically from old docks and warehouses to scenic spots and towering buildings such as the Shanghai Tower, the highest building in the country, more and more people flocked to take in the ever-changing sights.

The scenes have in recent times gotten even better. In January, the riverfronts on both sides of the river were connected to form a scenic 45-km trail that is open to the public. From its northern end at the Yangpu Bridge, the trail meanders through five districts to its southern end at Xupu Bridge. 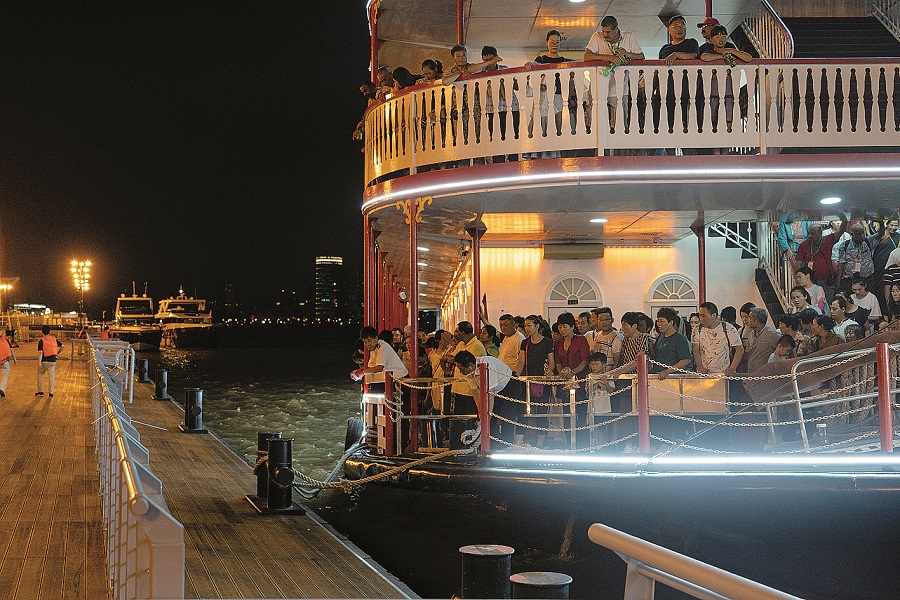 Taking a cruise ship and traveling along the Huangpu River is a classic and popular tourist activity in Shanghai. (Photo: Gao Erqiang/China Daily)

The cruise industry is also set for a sprucing-up. The local government announced in May that it is aiming to turn sightseeing cruises in the city into a world-class attraction through a series of upgrades and by merging small operators.

The No. 1 Cruise Ship, the biggest vessel of its kind on the river, resumed operations in July after undergoing an upgrade. The 1,000-passenger dragon-shaped ship, which features traditional Chinese elements and bilingual audio guides in Chinese and English, departs from the wharf near the Bund and travels past the Yangpu Bridge or Wusongkou International Cruise Terminal before returning to its point of origin. Tickets are currently priced at 300 yuan ($44).

In the future, more cruise lines will be opened to provide tours during the day, and more stops might even be included, said Fang. The increase in the number of tours would also help to meet the growing demands for river cruises. Annual passenger cruise volume is expected to hit 6 million by 2020, twice current figures, according to the city's plans.

But the authorities have not forgotten about the ferry industry, having announced that free WiFi and multimedia services would be made available on these vessels in the third quarter of this year.

"The city is growing and I love how it looks at every period," said Zhen Yu, director at a State-owned research institute who is a regular customer of ferries and cruise ships.

"You get to appreciate the city's landscape and culture when traveling on a cruise ship. On a ferry, you get to witness the charming scenes of daily life, such as people on motorcycles eating their breakfast. Ferries and cruises represent the past and present of Shanghai."