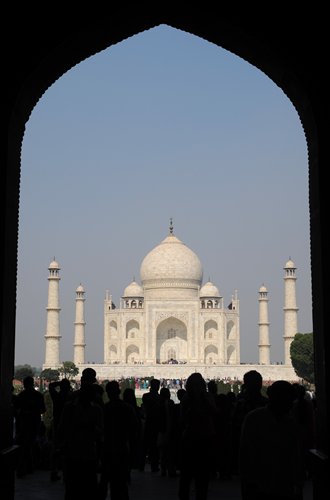 Visitors stand at the entrance of a gate facing the Taj Mahal, the famous white marble mausoleum in India. (Photo: IC)

Indian tourism authorities have been on a tour of several Chinese cities since the end of August, attempting to woo more tourists.Currently, India receives very few tourists from the world's biggest source of outbound travelers. The Indian government has vowed to attract 1.4 million Chinese visitors by 2019, Satyajeet Rajan, director general of India Tourism, told the Global Times on Wednesday during the 2nd Beijing International Travel Mart. In 2015, the annual number of Chinese tourists visiting India was around 200,000, and rose to 253,128 in 2017, according to data provided by India Tourism. Chinese tourists made a record high 130 million outbound trips in 2017, according to a report released by the China Tourism Academy (CTA) and the online travel service Ctrip.However, Chinese travel agencies and tourists have claimed that safety concerns, visa hassles, pricey tickets for local tourist sites and tumultuous Sino-India relations in the past several years dissuaded Chinese tourists from visiting India. Security concernsTo reach its target, India will increase the number of flights from China, offer Chinese food at restaurants, provide Chinese language services and build more toilets at tourist attractions, according to Rajan. India will also use its films to attract Chinese tourists. China and India will produce more joint films, and Indian celebrities like Aamir Khan will come to China for promotional tours, Rajan said. India has improved its tourism services to Chinese tourists since 2015. It opened a tourist e-visa to Chinese tourists in July 2015, and then in 2016, it launched a tourist helpline in 12 languages including Chinese, according to Indian Tourism. Chinese tourists and travel agencies believed that these measures have had a limited effect in luring Chinese tourists. "The top three factors affecting Chinese tourists visiting India are visa policy, safety concerns and destination preferences," Wang Huabei, media director of the Shanghai-based travel agency lvmama.com, told the Global Times. Most Chinese prefer island tours, such as to Southeast Asian countries, and those countries either offer visa-upon-arrival or visa-free policies to Chinese tourists, Wang said. On the website of several major domestic travel agencies, including ctrip.com and qunar.com, tours to India are not listed on their recommended or popular travel products. Group tours to India cost more than 10,000 yuan ($1,457 ) per person for 10 days, while the tours at the same period to Thailand and Bali only cost around 4,000 yuan per person. "Safety concerns are another reason. Many Chinese female tourists are aware of the widely covered rape cases in India, and the Indian government has to come up with tightened safety measures to protect foreign tourists," Wang said. Two Chinese women living in Beijing interviewed by the Global Times said that they canceled their planned Indian trip last year because their families worried about their safety. "I explained to my parents that I was not going to visit India alone, but they still insisted that I cannot go because India is too dangerous," said a woman surnamed Liu. However, Zhao Gancheng, director of the Shanghai Institute for International Studies' South Asia Studies department, who visited India many times, told the Global Times that the overall crime rate of India is below the world's average rate. Zhao said that it's the insufficient publicity and promotion of the Indian government that resulted in foreign tourists' misunderstandings. "The Indian government has to organize more promotional activities in China and keep regular contacts with Chinese travel agencies to understand Chinese tourists' needs," Zhao said. Current tours to India focus on Buddhist culture, but seldom on its food, medical care or traditions, so the Indian government could cooperate with Chinese travel agencies to broaden its tours and develop more routes, Wang said. According to Zhao, most Indian tourist sites charge much higher tickets prices to foreigners, but Indian people only pay very little. Political influence Political reasons, such as bilateral relations between China and India, could also harm tourism, according to Zhao. Sino-India relations experienced turbulence in recent years, and relations have not been fully eased since the Doklam standoffin 2017, Zhao said. But with the gradually improving ties this year, it's expected that tourism may also witness warm growth in the future. When meeting with Indian Prime Minister Narendra Modi in August, Chinese State Councilor and Defense Minister Wei Fenghe said that two countries should jointly maintain peace and tranquility in border area so as to contribute to a closer development partnership, Xinhua News Agency reported. Yang Chuchu contributed to this story