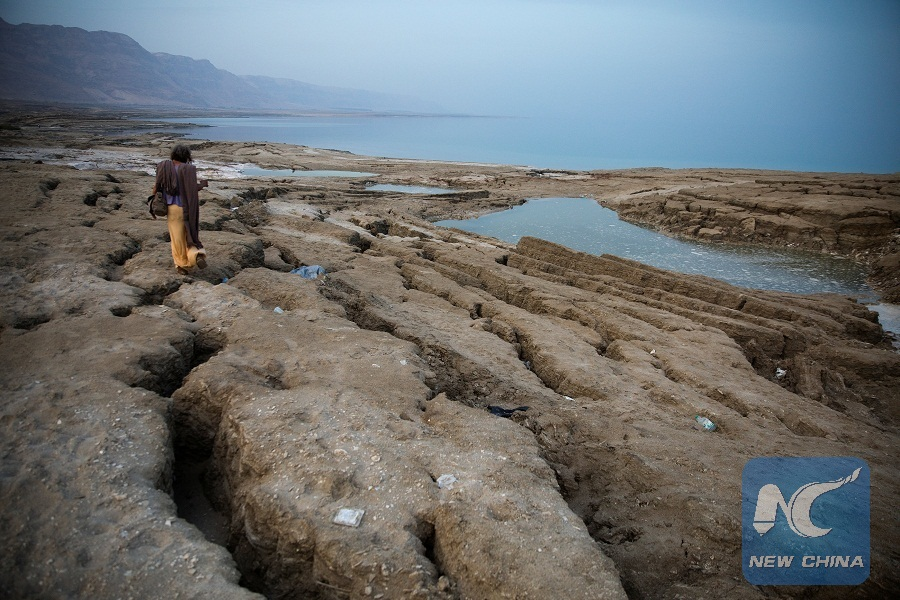 The decreasing of water level of the Dead Sea is raising concerns, Israel's Ministry of Environmental Protection said in a status report of the country's environment, with disturbing information about the situation of the Dead Sea.

The rate of the Dead Sea water levels decreasing is at an average of 1 meter of depth a year.

The face of this special place is becoming unrecognizable and a new reality is settling in, however difficult it may be to admit.

The report deals with other environmental challenges that Israel is facing, but the unique characteristics of the Dead Sea, the lowest place on earth, are of great concern.

The sharp decrease began in recent decades and is a result of policies undertaken by both Israel and Jordan, who share a border in the salty body of water.

The two countries, facing a continuous lack of water, needed to divert water that would normally runs into the Dead Sea.

This decision was critical to the fate of the unique body of water.

"As long as water is not going to the Dead Sea, we don't see a solution," she said.

The Dead Sea, which used to be one continuous body, is now dotted with small salt islands. It is a stark visual reminder of how quickly it is drying up.

The coastline has also gone farther inwards compared to where the sea used to be. There are stranded lifeguard posts where water once used to be but is no more.

Will the Dead Sea soon be a thing of the past?

"The sea level is going to drop ... further, but it's not that the Dead Sea is going to disappear, because it is deep enough," Netanyahu said, "accessibility to the water is going to much more cumbersome."

In the past, a tourist could take a quick walk to the coastline and dip their feet in the salty water. Today, hotels and beaches supply vehicular transportation to the water because it has become so far.

"The access is going to be much more complicated and infrastructure needs to be invested in order to make it more accessible to the public," said Netanyahu.

A Jordanian plan is slated later this year. Named the Red Sea-Dead Sea Conveyance project, its aim is to alleviate the problem by laying a pipeline from the Red Sea that will supply water for areas in need, including the Dead Sea.

It is a controversial plan which has some environmentalists concerned. In any case, it will not completely solve the issue.

But for the chief scientist, there is a more realistic goal, which is acknowledging that these negative changes are here to stay and work around them, trying to leverage what may currently be seen as disadvantages and turning things around.

This is especially relevant for the sinkholes that have transformed the landscape around the Dead Sea.

There are about 6,000 of them and they are causing grave danger. Several areas have been sealed and the entrance to them is forbidden. The view is astounding.

The sinkholes are a direct result of the drying up of the Dead Sea which has created a vacuum underground that eventually causes the earth to cave in. The danger cannot be underestimated.

"It's something you cannot reverse. It's there, you cannot change it, you cannot fill them with other materials." Netanyahu said.

She added that maybe the sinkholes can be changed into a tourism spot, but this out-of-the-box approach requires acknowledging the troubling reality.

There are other factors that are contributing to the deterioration of the situation in this natural gemstone.

Although the ministry does not consider it a major factor, there are factories in the area which extract the salt from the sea for manufacturing products.

Cosmetics from the region are world renowned for their healing properties for many skin ailments.

In order to manufacture potash, a salt in a soluble form, water is regularly extracted from the Dead Sea by these factories.

All of this is disrupting the delicate natural balance that has created this place.

Netanyahu said all these moves are essentially changing "the creation," an attempt to meddle with nature that has disastrous results.

But the main cause for the negative developments is climate change. As the planet is getting warmer and weather patterns are changing, the Dead Sea is paying a heavy price.

"Climate change is here and we are going to have less water. We have to acknowledge that," said Netanyahu.

Clearly, the area will not return to its glory days of decades ago.

While a plan must be implemented to guarantee the situation does not deteriorate further, governments and organizations need to come to terms with the new reality and make the best of it.