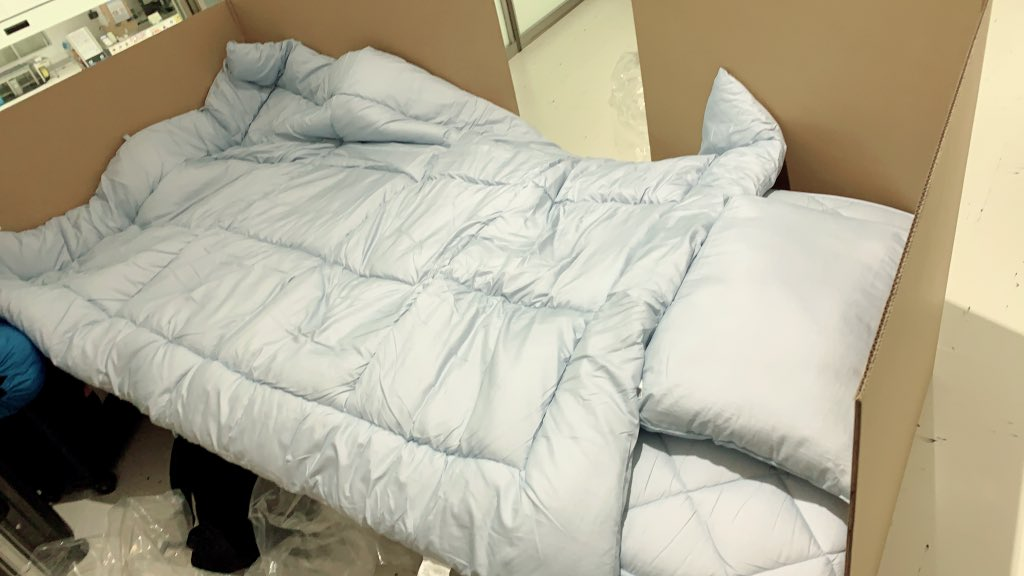 A cardboard bed at Narita Airport in Japan. (Photo: CGTN)

International passengers arriving in Japan are now facing an unusual ordeal: a stay in a makeshift "cardboard hotel" – complete with cardboard beds, futons, and quilts.

"Tonight, I'm sleeping here," tweeted one passenger, who had traveled to Japan from Hanoi. "Only until the test results return."

Those arriving from COVID-hit countries, like the US and Italy, are required to undergo PCR (polymerase chain reaction) tests, which usually take about six hours. But according to a report by Reuters, officials are saying that delays have meant passengers could be stuck waiting for up to two days.

The cardboard beds are meant to be used when nearby hotels are at full capacity, as passengers arriving from overseas aren't allowed to use public transportation. Those who have rides other than public transport are allowed to wait for their test results at home.

Developed for use in evacuation centers during disasters, each bed has been set about two meters apart, prompting concern online that passengers might contract the virus while staying there overnight.

"How many people are getting infected while waiting for their results?" one user tweeted.

According to local media, such beds were first put into use on the evening of April 8. An earlier lack of accommodation had meant people were forced to sleep on chairs.

As COVID-19 cases continue to rise in Japan, entry into the country has become increasingly restricted. Its tourism numbers have dropped dramatically, with the number of foreign travelers falling by 99.9 percent, according to Japan's foreign minister on Monday.

Japan now has more than 11,000 confirmed cases and 270 deaths. On Monday, it reported 25 new coronavirus-related deaths, its highest daily death toll so far. A state of emergency has been expanded to the entire country. The World Health Organization said it is concerned about Japan's rising number of cases.