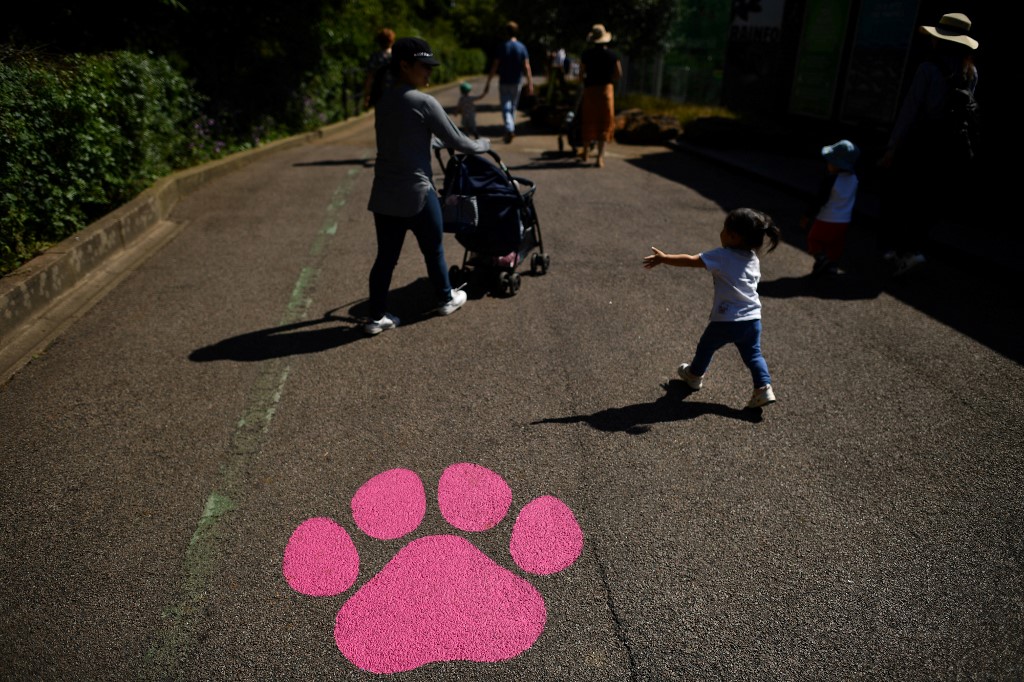 New pink floor signs show visitors a route at the re-opened London Zoo in Regent's Park in London on June 15, 2020 as some non-essential retailers reopen from their coronavirus shutdown. (Photo: AFP)

LONDON, April 21 (Xinhua) -- London Zoo, one of the British capital's biggest attractions, announced Wednesday the upcoming opening of its latest attraction, the World of Tiny Giants.

The Zoological Society of London ZSL said its new immersive exhibit celebrating the planet's smallest but mightiest animals will open to the public in May.

"Shining a spotlight on the planet's smallest superheroes, from underwater corals and the aquatic wildlife they support, to industrious leafcutter ants, spiders and beetles, the exhibit celebrates the species we quite literally couldn't live without," said the ZSL.

Postponed from 2020 as a result of the global COVID-19 pandemic, Tiny Giants: From Minibeasts to Coral Reefs will open to the public on May 17, in line with the British government's roadmap for indoor attractions.

The ZSL said visitors will be given a bugs-eye view of the world, as they find themselves shrunk to the size of an ant, surrounded by a garden of giant leaves and flowers, to enter the zoo's newest exhibit.

Attractions include jumping spiders to the psychedelic sight of a mantis shrimp and multi-talented aquatic animals who clean oceans, seas and rivers.

A seven-meter long reef aquarium will be home to schools of reef fish, including clownfish and blue tangs swimming through a forest of corals rescued from the illegal wildlife trade by London Zoo's experts.

In the zoo's Partula Lab critically endangered tree snails are being reared as part of a vital breeding and reintroduction program to save the species from extinction. Snails bred at London Zoo are released on the islands of French Polynesia after invasive predators drove the species to extinction in the 1960s.

Britain's only spider walkthrough will mean nothing standing between visitors and a clutter of golden orb spiders in their beautiful webs.

The exhibition will also include a thought-provoking alternate world, where insects no longer exist, to explore just how different the daily lives of humans would be without largely unseen animals, described as spineless superheroes who do everything from cleaning the environment and revitalising soil to pollinating a third of the supermarket staples people buy everyday.