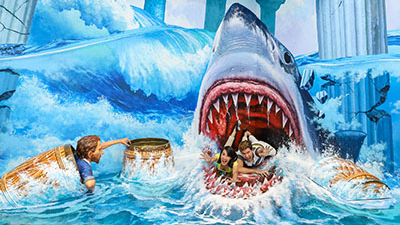 Mexico's first 3D interactive museum, called the Trick Eye Museum, becomes the perfect destination for those who love selfie games. It has also become a hot topic on social media.

The Trick Eye Museum is the first 3D interactive museum aimed at offering visitors content for their social media posting. Visitors can download an app before touring the museum to get hints on how to pose.

Mexico's Trick Eye Museum the 10th of its kind in the world. Originating in northeast Asia, it's the first to open in the Americas.

"Mexico was chosen as the first one in the Americas because the studies showed that we enjoy being in front of the camera; we have such a good market. This has been a trial for the Americas, to see if the investment in the United States comes next," said Monica Cepeda, the marketing director of the museum.

Cepeda said that social media is completely changing the way traditional marketing works, as people now are more likely to be interested in something KOL (Key Opinion Leaders) post online rather than posters on billboards or TV commercials.

Leobardo Hernandez, a digital media analyst, told CGTN Mexico is among the world's largest per capita users of social media.