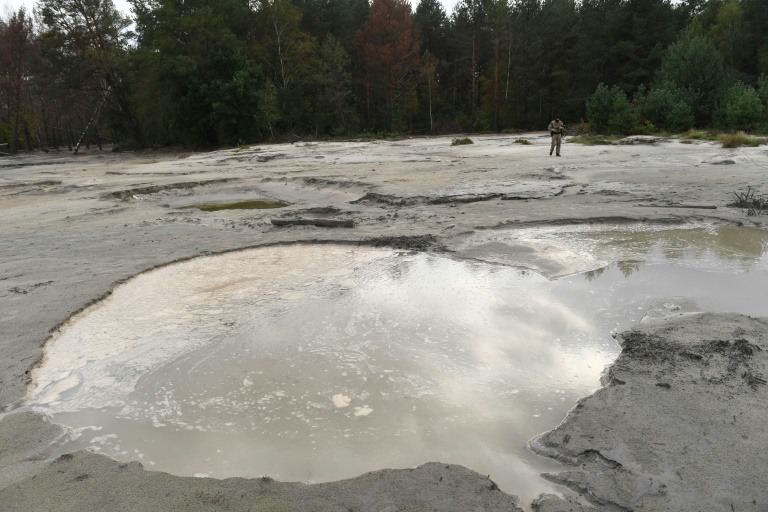 Illicit amber mining is thriving in Ukraine, which has the world's second-largest reserves of amber after Russia, according to the state geology committee. Photo: AFP

Volodymyr Korkosh steps on the accelerator and his jeep lurches forward, jumping through deep water-filled ditches. "We often come too late by just two to three minutes," the police officer shouts in disappointment.

His unit carries out daily raids on the outskirts of the village of Kryvytsya and nearby settlements in northwestern Ukraine's Rivne region, aimed at catching locals red-handed mining amber illegally.

Once a scenic forest area, the site has been turned into a moonscape with wet marshy sand on the surface and man-made, funnel-like pits scattered for hundreds of metres around, evidence of work by hundreds of illicit prospectors.

This site, which locals call a "Klondike" in reference to a 19th-century gold rush in Canada, is one of a number of amber fields in Ukraine, which has the world's second-largest reserves of amber -- some 15,000 tonnes -- after Russia, according to the country's state geology committee.

Amber is the translucent resin of trees which fossilised over millions of years and ranges in colour from pale yellow to deep brown. It is used as a gemstone in jewellery making.

But as prices for amber have quadrupled in recent years, fuelled by demand from China, Ukraine has suffered from an illegal mining crisis. 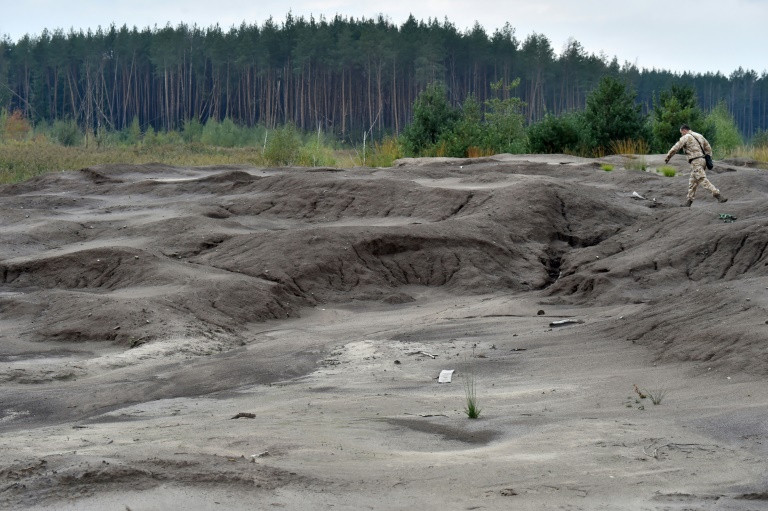 Legal mining in Ukraine produced just four tonnes of the mineral in 2015, according to the most recent available figures, while unlawful methods of amber extraction have reaped 120 to 300 tonnes annually in recent years, said the geology committee.

"The state suffers missed financial opportunities that are huge. In addition, we can already talk about an environmental disaster," it said in a written comment to AFP.

Prospecting for amber involves applying high-pressure water to the ground. That loosens the amber, which then floats to the surface, but also erodes the fertile top soil to the point that trees can no longer grow there. 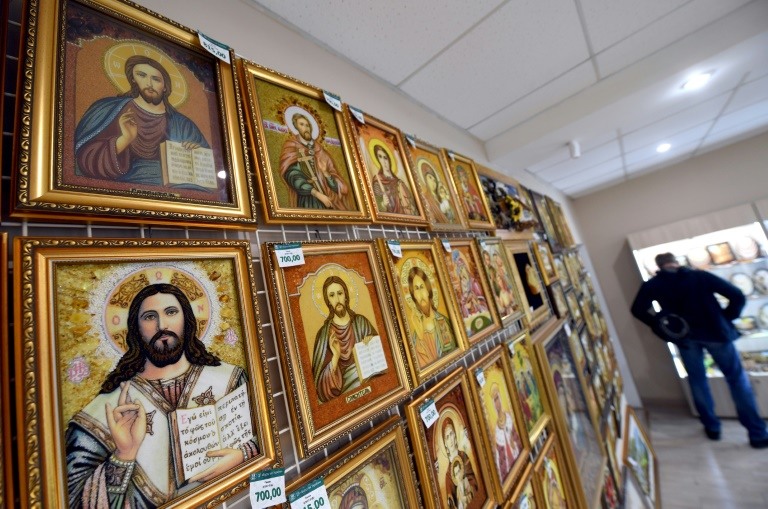 Amber is the translucent resin of trees which fossilised over millions of years and is used as a gemstone in jewellery or for religious icons. Photo: AFP

Illegal prospectors admit they cause damage but say the work is the only way to make ends meet in a deprived region.

"Some people there live below the poverty line," Oleg, a 28-year-old miner, who wanted to give only his first name, told AFP.

"I was constantly scared, but the adrenaline and the taste of the first big money blocked that fear," he said, having recently spent four months mining amber in his native northwestern Zhytomyr region, which neighbours Rivne.

Agreeing to be filmed only with his back to the camera and the hood of his grey sweatshirt over his head, the former assistant manager in a Kiev-based trade company said his monthly salary was about 6,000 hryvnia ($220, 187 euros), but at the Klondike he managed to earn $300 in the first five days.

Working in groups of five to 10 people, the miners use powerful homemade pumps and thick hoses to funnel water to a depth of 10 metres (33 feet) in the ground, wash out a dirty mixture of clay, sand and stones and then finally sift from it the coveted gems. 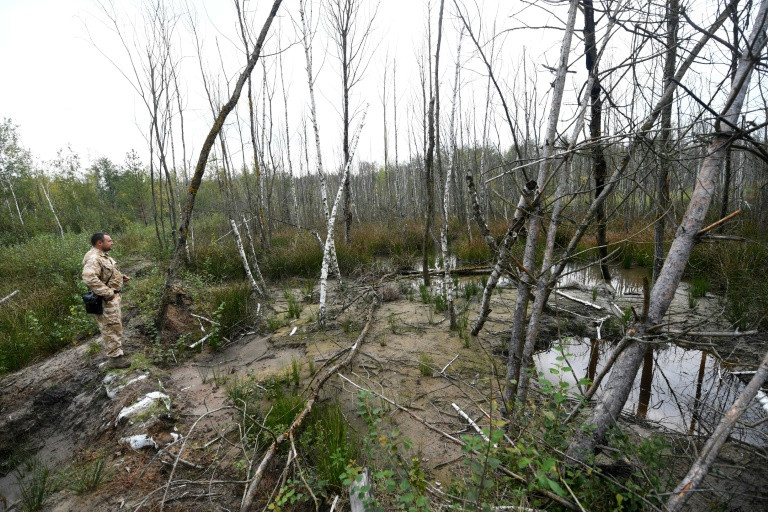 Reinforcements have been brought in to help police to battle illegal amber mining. Photo: AFP

As soon as prospectors get information about an approaching police car, it takes just a few minutes for them to turn off the equipment and vanish.

Korkosh leads a team of some 200 police officers brought in to reinforce the Rivne regional police since March but they don't often manage to detain the amber hunters, who work in remote areas.

"We raid the sites of illegal mining and document the crimes. When we arrive, the mining at least stops," Korkosh told AFP, as he stood near a freshly dug abandoned pit, minutes after once again arriving too late to make an arrest.

Amber can fetch as much as $20-$30 per gram, depending on quality, said Sergiy Martynyuk, a deputy director of Burshtyn Ukrainy (Ukrainian Amber), the only state-owned amber production company. 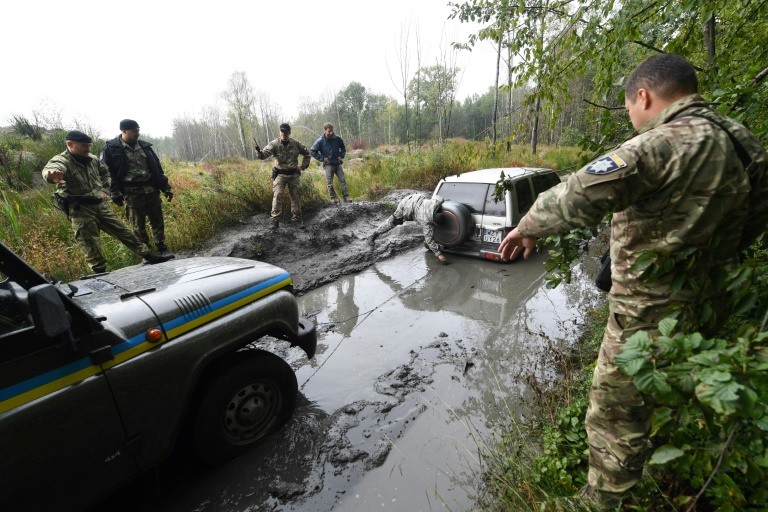 But he laments that the illegal water extraction method breaks stones and lowers their value.

"They apply powerful pumps that create strong water pressure and, as a result, the stone is broken during extraction," Martynyuk, whose company mines amber according to the permitted method using a digger and then makes jewellery and amber mosaic pictures, told AFP.

Authorities in the troubled region are considering legalising prospecting as a possible solution to the problem, by way of encouraging miners to pay taxes and make the procedure less harmful.

But the draft law aimed at simplifying the bureaucratized procedure for obtaining mining permits has got stuck in Ukraine's parliament.

"The bill probably does not solve all the problems at once," concedes Rivne regional deputy governor Igor Tymoshenko.

But he hopes that it could "create legal work places and change the mining methods that are wreaking irreversible damage on this land."